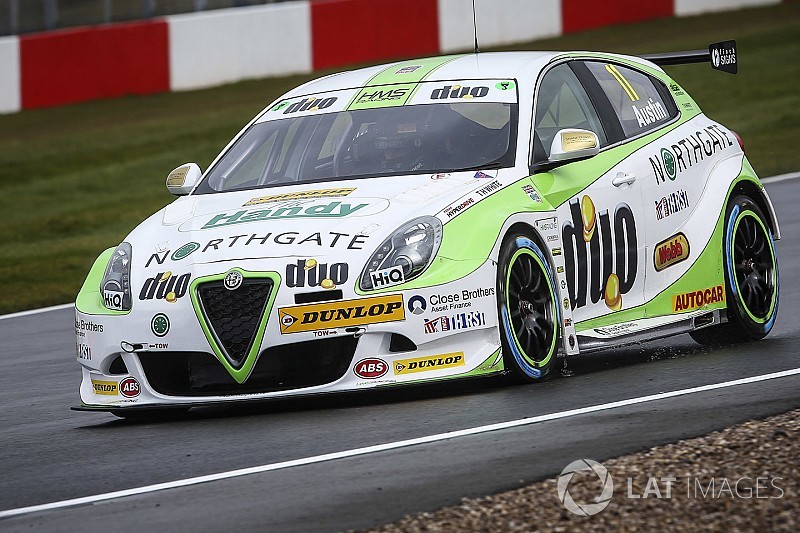 The new HMS Racing Alfa Romeo Giulietta of Rob Austin topped the times at the official pre-season test session at Donington Park ahead of next weekend’s opening meeting of the British Touring Car Championship.

He finished ahead of Tom Chilton’s Motorbase Performance Ford Focus, which registered a 1m10.238s lap.

Austin said: “We knew this car would be good on paper, but it is great to see the maths works out when we hit the track.

“I am still not at the sweet spot with the car yet either. There is a more to come from it and we still have work to do, and also you never know who is running with what ballast on days like today, but we have to be encouraged by this.”

The factory BMW 125i M Sport of Colin Turkington was third-fastest in the times, and the double champion said he was satisfied with a day of experimenting with the car. He clocked a 1m10.354s lap.

“We were making some quite fundamental set-up alterations today which we wouldn’t normally have time for in a race weekend when you don’t want to go too far outside the box,” said the Northern Irishman.

“Now we know what works and what doesn’t work, so we have made progress. Donington Park has never been a particularly strong circuit for us, and those are the kinds of venues we are working hard on ahead of the 2018 season.”

The returning Sam Tordoff was fourth in the Motorbase Performance Ford Focus with Andrew Jordan fifth. The Power Maxed Racing Vauxhall Astra of Josh Cook, which had topped the times during the early minutes of the four-hour session, was sixth.

Jack Goff missed the closing minutes of the session after spinning into the gravel at Redgate corner in his Eurotech Racing Honda Civic Type R. His best time put him seventh.

The brand new Team Dynamics Honda Civics of Matt Neal and Dan Cammish were 13th and 14th respectively. Team manager James Rogers said that the pairing was just working through a programme with the car, which only hit the track at the start of this month.

“We are still in the shakedown process really,” said Rogers. “We did have a couple of small issues today, just things you would expect with a car as new as this, but we had some good solid mileage and are happy with the direction we are going in.”

Reigning champion Ash Sutton drove the car for the first time since he claimed the title at Brands Hatch in October 2017. The 24-year-old completed 30 laps but was 1.1s from the ultimate pace with a 1m11.224s lap.

Why this BMW driver will win the BTCC