Jordan sure he has ‘moved on’ from racing in BTCC

Andrew Jordan, the 2013 British Touring Car champion, says his comeback outing at Silverstone last weekend has reiterated his belief that he has moved on from the series.

The 32-year-old drove the Toyota Corolla hybrid development car as a preview to the BTCC adopting hybrid power in 2022, on his first outing in the series since he finished runner-up in 2019.

Jordan split with the West Surrey Racing BMW team on the eve of the COVID-delayed 2020 season, and since then has focused on the family Jordan Racing Team’s extensive work building and preparing historic machinery, as well as the hybrid test-driving role. He also leads the 2021 Mini Miglia Challenge.

“I don’t mean it in a bad way against the championship, but I’m 110% happy with how things are these days with me and what else I’ve got going on,” Jordan told Motorsport.com. “It was good to be there and actually go, ‘Yeah, I’ve completely made the right decision and I’m at one with what we’re doing now.’

“I was more than happy with not being in there full-time, so I have no desire to do that if I‘m honest – I’ve moved on from it and it doesn’t do anything for me.

“If I watched the Goodwood Revival on the TV and I wasn’t there, I’d 100% want to be there, but with touring cars I’ve moved on – I’ll watch it if I’m around, just because I’m intrigued about who’s doing what, but it doesn’t one bit make me want to find the budget to get out there and do it.

“There’s nothing I hate about the championship – it’s just that in my head I’m quite done with it and I’m cool with not being in it.”

Jordan, who began his career in rallycross, has acquired a Ford Fiesta supercar and plans to return to the discipline in 2022, but says that the World Rallycross Championship’s electric future is “not on the radar”.

“Next year I’ll do some British and some European rallycross with it, running it ourselves,” he said. “That really excites me. That’s what I want to go and do – that and historics.

“With the historics it’s just so busy in terms of business that I wouldn’t have the time to do that and a full-time thing like touring cars. It just wouldn’t work – I couldn’t fit in such an intense programme alongside our historic commitments.

“I want to pick some of the big European rounds like Holjes and things like that – just bucket-list events that will be an adventure. I’m looking forward to that.” 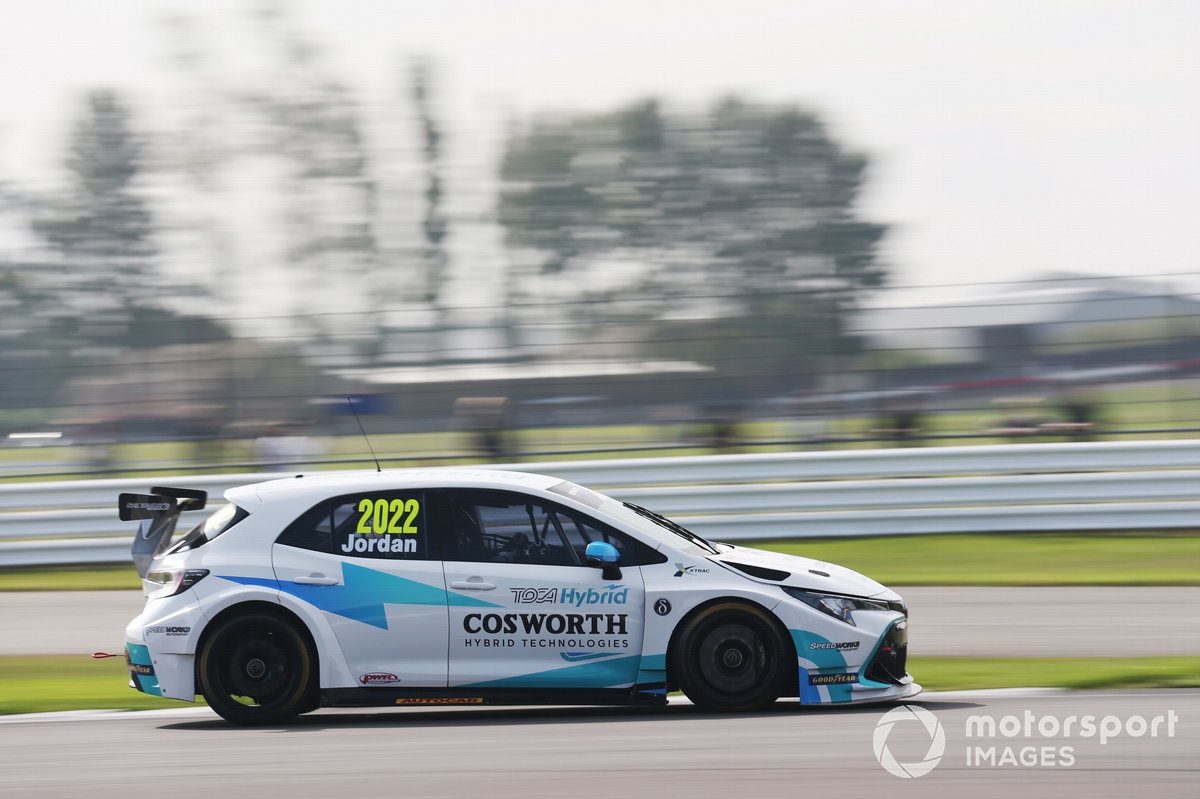 Jordan’s hybrid Toyota, built and prepared by Speedworks Motorsport, was operated out of the adjacent garage to the squad’s two regular Corollas at Silverstone, where Rory Butcher scored a breakthrough with pole position and two victories.

Team boss Christian Dick said: “It obviously feels like it’s all clicked. I knew from the get-go there’d be a transition with the change in personnel and two new drivers [Butcher and Sam Smelt].

“But we’ve got stronger and stronger in terms of pace; we’ve been unlucky a couple of times but this time it’s all clicked into place.

“Even with full ballast in race two [for winning race one] Rory was comfortable – he had an epic weekend.”

Neate in trouble for altercation

Motorbase Performance Ford racer Andy Neate was given a written reprimand plus two penalty points on his licence ‘for instigating an altercation with a member of another team’ after the first race at Silverstone.

BTC Racing Honda drivers Senna Proctor and Jade Edwards were given the same punishment, each being blamed for incidents with the Team Dynamics Honda of Gordon Shedden – Proctor’s in the first race, and Edwards’s in the second.