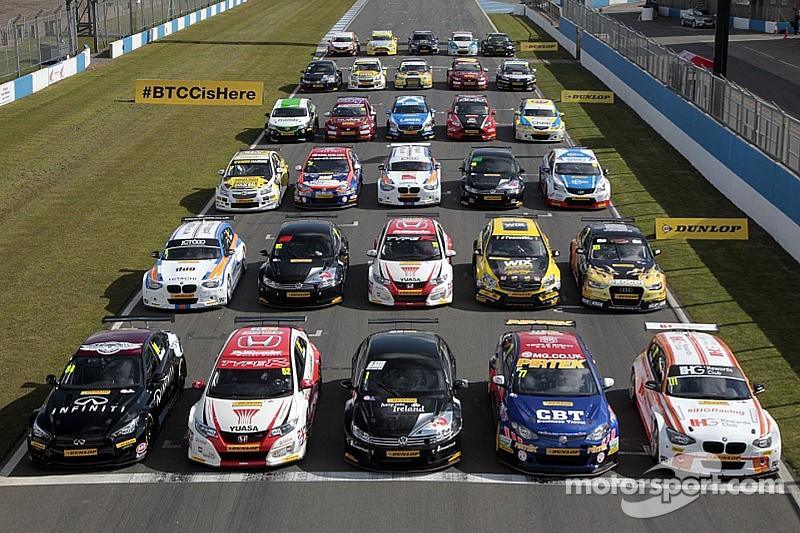 Over 30 cars could become a regular sight for BTCC events in 2015.

The 2015 British Touring Car Championship was officially unveiled to the Media day at Donington Park where a capacity grid of 32 cars is expected at some point during the season.  Cars from Honda, MG, Infiniti, VW, BMW, Chevrolet, Mercedes, Ford, Toyota, Audi and Proton will be represented on the grid while Dunlop will continue as title sponsor as they enter their second decade associated with the series.

The series will start at Brands Hatch with 29 cars expected on the grid with Motorbase duo Mat Jackson and new signing James Cole not appearing on the grid until Snetterton and  another driver, who we will get onto later, not due to appear until Croft. 29 drivers appeared at Media day with the exception of Triple World Touring Car Champion Andy Priaulx who was not back following his commitments of racing in the US with ex BTCC racer Paul O’Neill stepping in to test his WSR BMW 1 series.

Nic Hamilton joins the ranks of the BTCC

During the day there were many high profile car unveils including the official launch of the Honda Yuasa Racing Civic Type R, however the big news on the day came with the announcement that Nic Hamilton brother of F1 World champion Lewis will enter the BTCC from Croft onwards, not including Knockhill, in an Audi S3 last year driven by Robb Holland for AmD Tuning.com with sponsorship from Monster Energy drink.

Hamilton will enter the series as a guest driver with the aim of a full season in 2016 and will become the first disabled driver to enter the series as he suffers from Cerebral Palsy. What makes Hamilton’s drive all the more remarkable is the fact that he was told by doctors he would never be able to walk, but yet here he is now about to contest in Britain’s premiere Motorsport series.

Hamilton has previously spent two years racing in the BTCC’s feeder series, the Clio Cup and speaking upon his announcement said, “I am incredibly excited to be racing in BTCC with AmD Tuning this year. BTCC is the top national motorsport series here in the UK and having the opportunity to race at that level is the biggest challenge I’ve taken on in my career to date. Whilst I’m aiming to improve as a driver, I’m also hoping to inspire others to strive for their own personal goals, whatever their situation in life. Anyone can ‘Exceed Expectations’ in one way or another and I hope to prove that when I race alongside, not just able-bodied drivers, but the best Touring Car drivers in the UK.”

For the third year running the format of the Jack Sears Trophy has been changed and will now be awarded to the lead rookie in 2015. Previous winners of the Trophy were Lea Wood when it was for S2000 machinery and Dave Newsham last year for Independent drivers who made up the most places during the races.

Although a rookie, as a guest to the series Nic Hamilton will not be eligible for either the Jack Sears Trophy or to score outright Championship points.

Hamilton's brother Nicolas to race in the BTCC