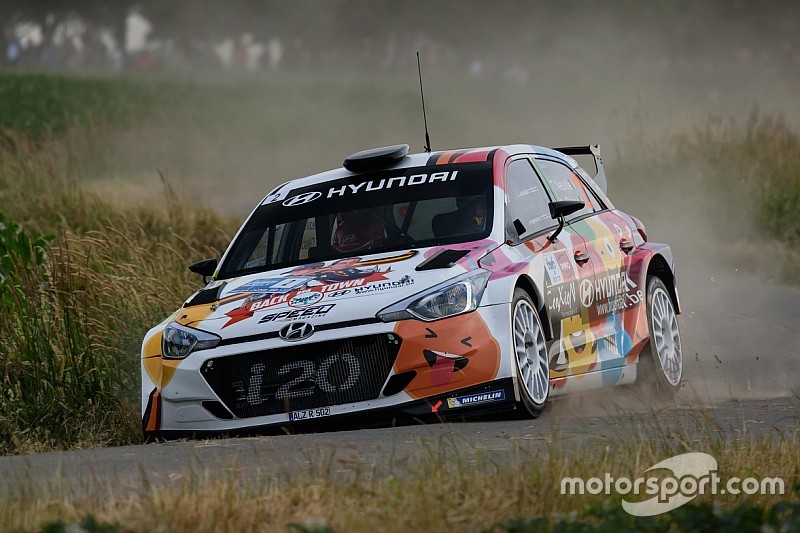 World Rally Championship frontrunner Thierry Neuville has crashed out of the lead of the Ypres Rally.

He rolled at high speed into a ditch on SS6 while heading Bryan Bouffier in a lead battle in which the gap between the pair was under three seconds.

In a one-off appearance on the event in a Hyundai Belgium-backed i20 R5, 29-year-old Neuville returned on Saturday morning under Rally2 regulations where drivers can restart on the next day if they have retired.

“I just came in to fast and didn’t expect there to be so much gravel on the road,” said Neuville. “There was no chance to turn through the corner.

“I planned to take it quite fast, and when I saw the gravel I tried to brake harder, but I understeered and I went off.”

The mechanics worked on the car until 5am to get Neuville back out.

The 2011 Monte Carlo Rally winner took a 21.9s lead into the final day of the event on Saturday.

Vincent Verschuren, a favourite for the local Belgian Rally Championship, rounds out the top three.

The British Rally Championship is part of the event as a whole for the first time, with M-Sport works driver and three-time BRC champion Keith Cronin in the lead.

Erstwhile leader, and BRC championship leader, Fredrik Ahlin, crashed on the last stage of Friday’s action. He restarts with Neuville on Saturday.

Cronin lies eighth, with just over 20s between he and fellow BRC rival Desi Henry (Skoda Fabia R5. Neuville’s Hyundai team-mate on this event, Tom Cave, is third in the BRC and only 2.4s behind Henry.