From the Head Trauma Unit to the Australian GP

Tracey Davies’ motorcycle racing career was once in tatters as she struggled to recover from a brain injury. Now, she’s readying herself for a second consecutive start in the Australian Superbikes support category at the Australian GP.

There’s rarely a lack of storylines weaving through the MotoGP paddock as Phillip Island rolls around.

The Australian round of the World Championship falls at a decisive part of the season, with titles on the verge of being decided and simmering rivalries ready to hit boiling point as the gruelling travel schedule of three flyaway races on the bounce takes it toll on the sport’s stars.

But the interesting stories don’t stop at the top end of town. There are plenty of untold stories out in support category land too, as amateur riders beg, borrow, and steal to get their shot on the biggest motorcycle racing stage in the country.

Take Tracey Davies for example. One of very few female competitors on the Aussie road racing scene, Davies is set to make a rare start in the Australian Superbike Championship at Phillip Island this weekend.

What makes Davies’ story remarkable is actually nothing to do with gender. Rather, it’s the amazing journey she’s been on since sustaining an Acquired Brain Injury from a crash more than seven years ago.

Up until mid-2009, the former Speedway driver was competing regularly at both state and national level in and around her native Victoria.

But a pair of crashes, the second significantly worse than the first, left her not only without a ride, but facing a serious bout of rehabilitation to recover from a brain injury.

“In 2009 I had a fall and broke my wrist, so it meant I was unable to finish the rest of the year,” she explains.

“I struggled to get finances for 2010, so I thought I’d just do a few races and wing it, see what I can do.

“In August 2010 I got hit from behind at a track day at Broadford, which left me with an ABI and 14 months of rehab.

“At first I was in denial that there was anything wrong me, as we all do, and every said it would hit me. And then it did. Throughout all of 2011 I spent four days a week at the head trauma unit in Ballarat to get myself sorted.

“When I think back, I wonder what I was doing still trying to race. But it was the bike that put me in there, but the bike that got me out and helped me feel normal again, because it’s hard to feel right after an accident like that. It’s hard to understand… it was very, very hard.

“But I stuck with it, and I’m still here racing and going quicker than I was before the injury. I came back stronger.” 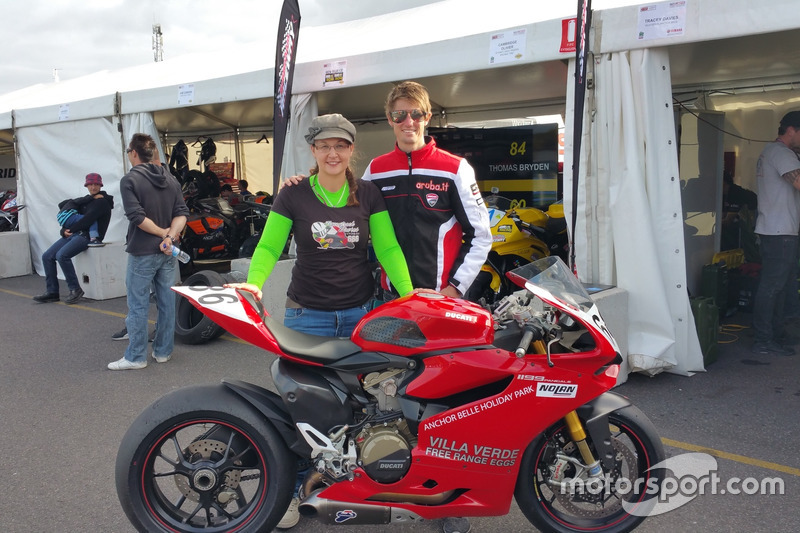 In 2012 Davies began to compete regularly again, but it was last year that she really hit the big time. A switch from a Honda Fireblade to a Ducati Panigale 1199S was followed by a return to the Australian Grand Prix for the Australian Superbike support race – the high-point of a turbulent comeback from that injury.

“Doing it last year was a nice little comeback after the injury and everything. It had been a big gap, so it was awesome to do it, and do it on a Superbike.

“We don’t get huge crowds for the smaller events, so it’s incredible to see the spectator areas. It’s great for our friends and family that come along as well.”

This year, Davies will return to the top-tier of national road racing in Australia for another crack on the big stage.

“It’s such great atmosphere at the GP. Even last year when the weather was bad, everyone was having a good time. We want to be part of the show. I had an absolute ball last year.

“It’s just the joy of being on a Superbike, it’s so quick. It’s mad but it’s a lot of fun. You’ve got to keep it real as well; I’m not aiming to get to MotoGP, I just want to go racing.

“There are a lot of people in the crowd who would love to have the opportunity to race at the Grand Prix. Anyone can do it, you don’t need to have big dollars. You don’t need millions of dollars of sponsorship.

“You just need to make it work so you can go racing.

“The last few years have been the best years of my career. It’s been a fun adventure, but a hard one as well.” 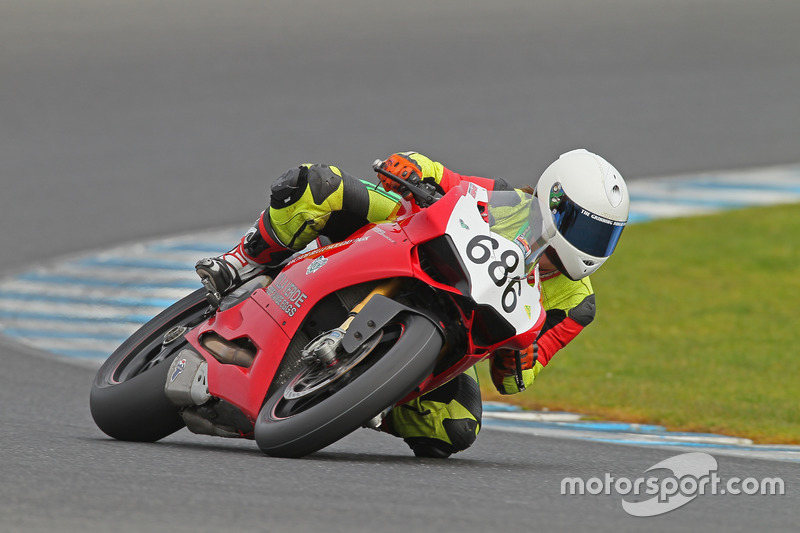