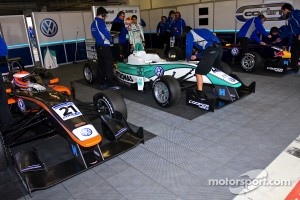 Formula 3 is ready to go on the island: The British Formula 3 Championship will open on Easter weekend (06–07 April) at Oulton Park. Five promising drivers “powered by Volkswagen” are set on following in the footsteps of the current Toro Rosso Formula 1 racers Daniel Ricciardo and Jean-Eric Vergne as well as GP2 climber Felipe Nasr who have won the titles in the series with the Volkswagen customer team Carlin since 2009.

“The British Formula 3 Championship is one of the most tradition-steeped junior series worldwide. A look at its history shows that those who prevail here have the chance to go very far in motorsport,” says Volkswagen Motorsport Director Kris Nissen. “There’s a good reason why a fourth of the current Formula 1 field was previously racing in British Formula 3. Ever since its return to the championship in 2009 Volkswagen has won the title each season plus an impressive 53 out of 80 races. That’s why we’re aiming to provide the champion this year again. With Trevor Carlin’s racing team and quick drivers we’re in an outstanding position.”

Trevor Carlin’s team is starting into the 2012 season with five new Dallara Typa F312 Volkswagen cars. Jazeman Jaafar is the most experienced driver of the British racing team that has been providing the British Formula 3 Champion seven times after entering the series in 1999. The 19-year-old junior racer from Malaysia is contesting his third Formula 3 season and finished last year in sixth place overall with four podium places. At the final pre-season tests at Oulton Park in late March Jaafar set the fastest time. “Testing has gone well for us ahead of the season,” said the Malaysian. “Dallara have built a really great car for us, the amount of downforce is phenomenal. Although we’re still in the early days of learning we’re looking strong for the season.”

Pietro Fantin (BR), Jack Harvey (GB) and Harry Tincknell (GB) are contesting their second full Formula 3 season. Each of them won one round in 2011. They finished the season in the United Kingdom on positions eight, nine and eleven, respectively. “I expect this year to be a good one,” said Fantin. “Last year was a learning curve for me in the championship however this year I think will be my best performance.” Teammate Harvey is also optimistic: “The target for the season is obviously to win. We’ve worked hard in pre-season testing and have done well so far. The competition is tough not just within Carlin but also elsewhere on the grid.”

Carlos Sainz Jr, the son of the two-time World Rally Champion and “Dakar” winner Carlos Sainz, is making his debut in the British championship that has been held for more than six decades. The 17-year-old is the youngest racer in the field and with ten victories at 20 races won the Northern European Formula Renault Cup last year. At the end of 2011 he made his first appearances with Volkswagen Power in the Formula 3 Euro Series and at the Grand Prix in Macau. Sainz Jr was another driver who attracted attention by setting fastest times in pre-season tests.

“We have five very strong drivers on board with us this year and we’re expecting great things from them,” said team principal Trevor Carlin. “They’ve all been amazingly close during pre-season testing so it’s impossible to pick between them. We’re pleased to be heading into our fourth consecutive season with Volkswagen Motorsport and hope that it’s one of our drivers who brings home the title this year.”

Harvey starts the season in style at Oulton Park