Autosport British F3 Championship 1998 Round 10, Silverstone, July 9th/10th/11th Changes: Portman Racing are now Portman Arrows and the cars have been painted black after Portman and Tom Walkinshaw reached an agreement to make Portman a ...

Portman Racing are now Portman Arrows and the cars have been painted black after Portman and Tom Walkinshaw reached an agreement to make Portman a junior team for Arrows. It is their intent to run in F3000 next year though they may have to settle for the proposed British series as anyone trying to get into the International series is having to go on a waiting list for entries.

TOM'S have been bought out by Audi. Precisely what this means for the short term future of the F3 team is still unclear though Mr. Fushida is trying very hard to ensure that Martin O'Connell is able to continue running.

Rumours are circulating that Martin Donnelly is about to sell off his F3 operation. This may be due to the lack of a major sponsor or paying driver. IT may also be due to a distinct lack of results this year.

Darren Manning was utterly stunning in qualifying, setting a time near to the start of the session that no one was able to better. It is unusual that the fastest time is set that early on and the opposition all seemed completely baffled by the turn of speed the Yorkshireman was showing. There was no question about it as far as Darren was concerned. If this was to be his last race, he was going to make sure it was a good one. The time he set was over half a second faster than Luciano Burti's best effort and it was interesting listening to the various attempts the other drivers made to rationalise something they really couldn't explain. Burti reckoned a spin had cost him the chance to get nearer the pole time. Enrique Bernoldi, conversely, made no bones about it, admitting that he had gone as fast as he had on the previous visit to Silverstone. It just hadn't been enough. Of the main series contenders, Mario Haberfeld was a long way back for him (in 8th place) and he was seriously depressed by it. As it turned out, he need not have worried. Martin O'Connell, however, had plenty to worry about, with the TOM'S outfit having been sold to Audi and his entire future in doubt. He didn't let it get to him, though a spin put paid to his chances of a good grid slot and he would start just ahead of Haberfeld. Martin was relatively philosophical. He knows that sometimes you get days like that and there's nothing you can do about it. He also doesn't much care for Silverstone, finding it boring.

Phil Scifleet was forced to give ground to Warren Carway in the National Class and would start second. He is now very close to wrapping up the title, however, so the likeable young Aussie could afford to take it easy.

If you thought some of what happened in the British Grand Prix was odd, believe me, the F3 race was not a lot better in terms of official decisions. But that was all to come. Everything seemed normal enough on Saturday afternoon when the field lined up to take the start under a cloudy sky. It was dry enough. No one was anticipating what happened next.

Manning was not quick away, messing up his start. After the rocket-like getaway at Snetterton, this was unexpected and it meant that Bernoldi and Burti were able to take advantage of the situation and were soon scrapping for the lead. Manning was quick to join them and the threesome were really fighting it out when the rain started. This battle eventually ended in tears when Burti ran wide. As he corrected his course, Manning was able to dive round and into the lead but Bernoldi was not so fortunate. Burti's PSR car clipped the Promatecme Dallara and pitched the two of them off the track. Bernoldi was furious and took a long time to calm down afterwards but really there was nothing Luciano could have done to avoid the accident. And so two of the front-runners were out of the race. Meanwhile, Manning was in the lead and wondering where the others had got to.

Further down the field, the other members of the Championship table top 5 were having a tough time of it too. Martin O'Connell made a mess of his start, stalling and getting away pretty well last. He set about a recovery drive that would net him fastest lap, but the TOM'S swan song was spoiled on lap 5 when Marc Hynes decided to try and get by O'Connell and Ben Collins who were having a vigorous fight for positions. "I decided not to try it, Ben didn't either but for some reason Marc seemed to think he could get through," said O'Connell of the manoeuvre that wiped all three of them out. His only consolations were a point for fastest lap and the fact that Burti and Bernoldi wouldn't be scoring points either. He could only hope that Haberfeld would fail to score too. With the rain getting heavier by the second, and the whole track looking more like a boating lake, it was quite possible that Martin might get his wish.

Another one having one of those days was Kristian Kolby who has had a year that can only be described as character-building. He has speed, he has talent, what he doesn't seem to have a present is luck, although that seemed to be changing during the afternoon. After another truly awful start, he would recover well enough to take 4th place while all around him chaos reigned (or possibly rained!).

Warren Hughes, meanwhile, was getting faster and faster, He seemed not to have noticed that it was raining, or he just wasn't bothered by it. There is much to be said for experience over youth and if you ever needed an illustration of the effects of age and cunning over youth and enthusiasm, Warren was about to provide it. In pretty rapid succession he passed Haberfeld and Hynes before setting about Ricardo Mauricio, the youngster finally making good on his earlier promise and turning testing speed into results. Even so, Hughes' move startled the youngster who really didn't quite believe what happened. He had felt he was safe and that no one would be able to pass him in those conditions and at that point on the circuit. He was very wrong and had to relinquish second place to the charging Geordie who then set off in pursuit of Manning.

Mario Haberfeld was obviously of the opinion that anything Hughes could do, he could copy. He was next to tackle Mauricio but couldn't get by. His frustration increased when it became clear that the ADR driver had the widest Dallara on the track. Eventually Haberfeld's own impatience proved his undoing when he spun and came back in 7th place. Ricardo was not going to give up his first podium placing of the year for anyone, even a fellow Brazilian, though the PSR driver quite obviously felt he should have.

While the Brazilian battle raged on, Hughes was gaining on Manning despite a small spin; At one point it looked as if he would be making history by taking a second win in the GP support race. He was well within reach of the blue car when Warren Carway went off at Bridge, destroying his car in the process. He was lucky to be unharmed after such an accident. However, the track was now littered with crashed Dallaras and in such lethal conditions the Safety Car was brought out. It seemed that the standard procedure would then take place, and the field would run behind the Safety Car for as many more laps as were needed to declare a result. This was not to be. To the confusion of Peter Venn, who was driving the Safety Car, he was told to stop at the accident and check on the driver but was not told to scramble. Instead, on the reasoning that finishing a race under the safety car would be "unsatisfactory" (and having more crashes wouldn't?), the red flags came out and everyone stopped. They were then told there would be a restart over 2 laps and that an aggregate result would be declared. At least the stoppage allowed everyone to change to wets. As it turned out though, running another two laps under the Safety Car and then declaring a result would not have changed the situation much and it would have avoided the drivers having to risk their necks in a second start.

At the end, Manning was the one to go into the record books as the first driver to win this event twice. The delighted winner may possibly race at Spa and at the final round at Silverstone if sufficient funds can be found. It will be a tragic loss to British motorsport if he doesn't.

Hughes was forced to settle for second and Mauricio hung onto his first podium placing, despite post-race protests from PSR. After looking at the video tapes, the Clerk of the Course agreed that Ricardo had been weaving but that he had seen far worse behaviour in his time. As a result the tiny Brazilian was fined two hundred pounds and had his license endorsed but the result would stand, to the disgust of Haberfeld. Too many Brazilians in one place seemed to be the trouble on Saturday but Mauricio was delighted with the result once the protest was out of the way.

Adam Wilcox in the second TOM'S car brought the team their final points in the series, finishing just behind Alex Yoong. It looks as if Wilcox is beginning to get to grips with Formula 3, though a third change of teams (he joins Intersport for the rest of the year), is not going to help. Another driver looking increasingly confident and competent is Yoong who drove a mature race and stayed out of trouble.

In the National category, only Scifleet and Steve Hayr would complete the distance, the victory going to the Australian. He only needed to finish in the top two at Pembrey to be certain of the title, though now that Carway has moved out of the class even this is a formality. 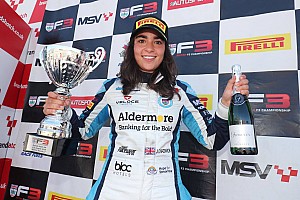