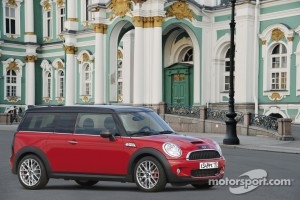 Munich/Moscow. A passion for motor sport fuels MINI’s presence at the Moscow International Motor Show 2012. The British premium small car manufacturer is using the event, which takes place in the Russian capital from 31 August to 9 September, to showcase its new John Cooper Works models in spectacular style. Taking centre stage is the MINI John Cooper Works Countryman, the first model in MINI’s elite performance line-up to channel the power of its engine – developed on the back of motor sport expertise – through the ALL4 all-wheel-drive system.

MINI’s close ties with rally racing date back many years and are underlined by the MINI Countryman Dakar model developed exclusively for the Russian market. MINI has launched this special-edition car to celebrate the MINI ALL4 Racing’s victory in the legendary Dakar Rally at the beginning of the year. The successful X-raid Team included Russian driver Leonid Novitskij, who finished fourth overall alongside his German co-driver Andi Schulz.

The MINI John Cooper Works GP Concept, meanwhile, is a candidate for pole position on the road. Also set to be unveiled at the Moscow International Motor Show 2012, the concept car offers a clear preview of its upcoming production sibling. The MINI John Cooper Works GP is equipped with an expansive spread of race-bred technology and has been fine-tuned in intensive testing at the Nürburgring. It is scheduled for launch later this year as part of a limited run.

The MINI John Cooper Works Countryman is just one of the new arrivals available for order with immediate effect. A newly developed turbocharged four-cylinder engine producing 160 kW/218 hp imbues the brand’s most powerful series-produced car yet with a barnstorming character. The MINI John Cooper Works Countryman also sets new standards in terms of versatility, and its all-wheel drive allows customers to experience extreme driving fun off the beaten track as well as on the road. The flexible interior offers space for up to five occupants.

The sixth model in the John Cooper Works line-up comes as standard with a six-speed manual gearbox; a six-speed automatic can be ordered as an option. The same freedom of choice will also apply to its John Cooper Works stablemates in future, all of which will be powered by a new generation of the four-cylinder engine with twin-scroll turbocharger, direct injection and fully variable valve management developing peak output of 155 kW/211 hp. MINI’s high-performance front-wheel-drive ranks will be represented at the Moscow International Motor Show 2012 by the MINI John Cooper Works Coupé. MINI will also treat visitors to several highly exclusive takes on the brand’s inimitable style, among them the MINI Bayswater and the MINI Highgate Convertible.

The latest additions to the MINI Connected range of products will likewise be on show in Moscow, introducing visitors to cutting-edge innovations in the fields of in-car infotainment and communications. The internet-based services available through the integration of the Apple iPhone into the MINI’s control system pave the way for even more driving fun and intelligent networking with the MINI Community. The existing selection of MINI Connected services, which includes features such as a web radio function and in-car use of Facebook and Twitter, is set for some impressive expansion.

The Moscow International Motor Show 2012 is the most important car show of the year in eastern Europe, and manufacturers from around the world use the occasion to present their latest products and innovations. The event takes place every other year and attracted over a million visitors in 2010. The Crocus Expo exhibition site in the northwest of the Russian capital provides the venue.

Mercedes-AMG One spied on Nurburgring Nordschleife

Pirelli stars ready to show their pace in Sweden

Mercedes-AMG One spied on Nurburgring Nordschleife