“It was incredible to be invited by Ford for this unveiling event. Seeing Joe Hinrichs and Raj Nair unveil the new Mustang was great. After they unveiled the Mustang we were invited up on stage for some photos with Joe, Raj, Henry Ford III and Parnelli Jones,” said Force. “The 2015 Mustang looks awesome. The aero is amazing. The crowd really loved it and I think it looks really cool.” 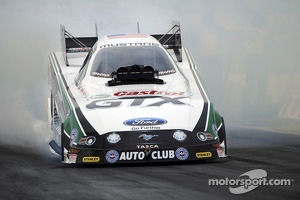 To celebrate the upcoming 50th anniversary for the iconic Mustang the all-new Mustang was unveiled in six cities around the world today, in addition to Los Angeles, New York, Shanghai, Sydney, Barcelona and its hometown of Dearborn all hosted special events. The 2015 Mustang goes on sale next fall in North America and is the first full redesign since 2005.

John Force Racing begin defense of their record 18th NHRA Funny Car title on February 6-9, 2014 at the historic NHRA Winternationals in Pomona, California with Force piloting his Castrol GTX High Mileage Ford Mustang in pursuit of his personal 17th Mello Yello Funny Car championship. He will have to hold off strong pursuit from daughter Courtney Force in the Traxxas Ford Mustang and son-in-law Robert Hight, driver of the Auto Club Ford Mustang and the 2009 Funny Car champion.

Rimac’s new HQ to be built, complete with a test track