Markus Pommer went from pole to victory in Race 1 of the Auto GP weekend at Monza. The German, driving for Super Nova, had set the fastest lap of the day yesterday and retained the spot at the start, successfully controlling his opponents until the checkered flag fell. In second place, Tamas Pal Kiss (Zele Racing) recovered well after a complicated qualifying session.

The Hungarian opted for an early pit-stop, a strategy that eventually paid off to hand him another valuable result. In third, Michela Cerruti scored her maiden podium finish in the series. Driving the second Super Nova car, she won an exciting duel with Andrea Roda (Virtuosi UK) to take third place. 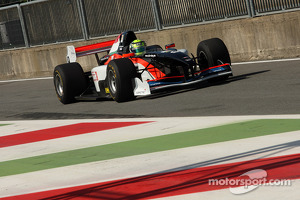 The latter paid the price a pit miscue when his left rear got stuck at the tire change, and had to surrender second place. His team was also assessed a 500€ fine for executing the change with an excessive number of crewmen.

Zele Racing’s Samin Gomez, making her Auto GP debut, managed to score points as she crossed the line in front of Euronova’s Japanese racer Yoshitaka Kuroda, who was slowed down by a puncture while fighting for fourth place and had to serve and unscheduled stop. He was also penalized 25” for scoring his fastest lap with the yellow flags exposed. His team-mate and fellow countryman Shinya Michimi also experienced bad luck as he was forced to retire after slowing down at Lesmo 1. A first-lap contact put out of contention Loris Spinelli (Eurotech) and Christof von Grunigen (Zele Racing). The Pescara-based a 10-place penalty for tomorrow’s grid.

The 15-lap Race 2 will take off tomorrow, Sunday June 1st, at 11:20. The race will be streamed live on www.autogp.net, while a live timing service will also be available.

Thanks to a decision taken by the weekend’s promoters, the access to the circuit will be free, enabling the fans to join their favorite drivers and see the Auto GP cars in first person.