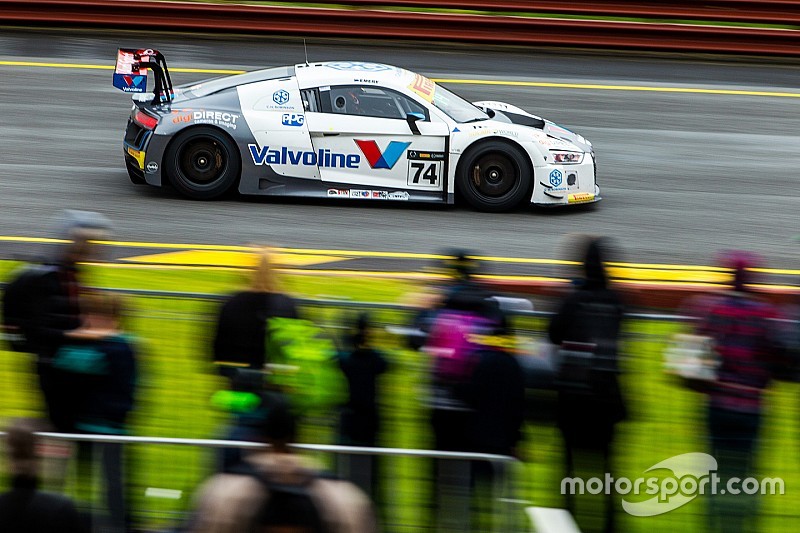 Geoff Emery capped off his remarkable comeback from breaking his back less than 18 months by wrapping up the 2017 Australian GT Championship at Sandown today.

The Audi driver came into the sprint season finale sitting second in the points behind Liam Talbot, and put himself right in the thick of contention when he won this morning’s first of three 40-minute races.

Emery’s title chances took an even bigger step in the right direction when Talbot made a game-changing mistake during Race 2. Sitting second at a mid-race Safety Car restart, the Walkinshaw Porsche driver ran wide at Turn 1 and spun after bouncing up on the kerb.

It put Talbot a lap down, and with Emery going on to finish second it swung the momentum well and truly in favour of the Audi driver.

While Talbot did his best to recover his title hopes with charging drive to second in the final race, Emery’s fifth place was enough to secure the title.

The title caps off a fairytale comeback season for Emery, who missed the second half of the 2016 season after breaking his back in a nasty crash at Barbagallo Raceway.

“From where I’ve come from in the last 12 months… I only had surgery at Christmas time and to come out and go to Clipsal and perform as we did, and just move on through the season, it’s been a really tough year for me to try and get back on the horse and perform both physically and mentally,” said Emery.

“At the very end of it we’ve come out on top, which is a good result. All that hard training has done us well.

“It means a lot. Coming from where I was a year ago it means a lot to me. Obviously there’s been a lot of tough times trying to come back and get back on the horse again, and a lot of physical challenges, a lot of mental challenges.

“There’s been so much going on in my life to get this all together and to come back and do it is fantastic!”

In terms of the three races at Sandown, Emery’s Race 1 triumph was followed by a fascinating battle in Race 2. Ash Walsh crossed the line first, but a 10-second penalty for a restart infringement meant he was ultimately classified down in fifth. That elevated Tony Quinn into first place, the AGT series owner having held off the likes of Emery, Steve McLaughlan, and Steve Richards in the closing stages.

The final sprint race of the season went to McLaren driver Fraser Ross, with Talbot coming home second and Walsh/Duvashan Padayachee rounding out the podium.

Highlands to drop Australian GT round