Victory at the 3 Hours of Sepang for OAK Racing 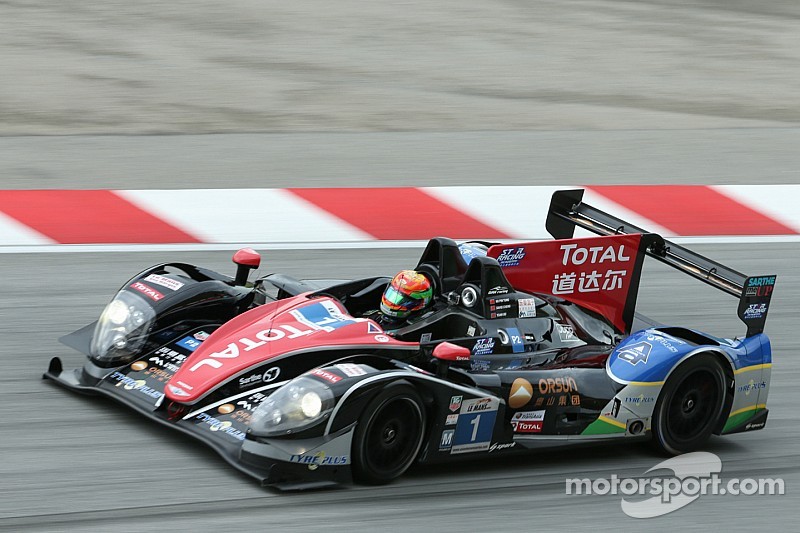 Four out of four for Oak Racing.

OAK Racing Team Total have finished the 2014 season of the Asian Le Mans Series on a high note by winning the 4th and last race in Sepang, Malaysia. With their first three wins, the team had already secured the series title last round in Shanghai, and entered this final race in very high spirits. The #1 Morgan-Judd LM P2, shod with Michelin tyres, developed by Onroak Automotive, and supported by Total, TyrePlus and Orsun, was unstoppable this weekend, with the Chinese driver trio of Ho-Pin Tung, David Cheng and newcomer, Yuan Bo, taking a very comfortable win, leading by two laps over their nearest rivals.

Ho-Pin Tung set the fastest lap of the weekend in qualifying, with his time of 1:56.875. His nearest rival was James Winslow in the #27 Eurasia Motorsport Oreca-Nissan LM P2, who set a best time of 1:56.979.

David Cheng was first to take the wheel for the race. For the first few laps, Pu Jun Jin in the #27 Eurasia Motorsport Oreca-Nissan LM P2 kept up a strong fight with the #1 OAK Racing Team Total Morgan-Judd LM P2, but by the third lap, David Cheng had enough power to start pulling away. Half an hour into the race, he’d already built up a lead of 13 seconds. By the time it came to pit, he had a significant enough gap so as not to lose the lead at the pitstop, despite choosing to change tyres when the #27 Oreca-Nissan didn’t.
Newcomer to the team, Yuan Bo, was next in the #1 Morgan-Judd LM P2. Being more used to single seaters, the young Chinaman adapted quickly to the LM P2 sport-prototype over the weekend. He managed his stint very well and kept up the gap, setting the best lap time of the race so far with a lap of 2:01.254.

When Ho-Pin Tung took over for the final hour of the race, they had a 2 lap lead over their LM P2 rivals. Ho-Pin Tung’s stint went very well too. He managed his Michelin tyres and continually improved on the best lap time which he set in 1:59.731. With fifteen minutes remaining, a sudden storm hit the circuit, forcing Ho-Pin to return to the pits to change to wet tyres. Two cars went off into the gravel, which brought out the safety car, but Ho-Pin managed to avoid any incidents and bring the car home to victory, in the pouring rain, with a comfortable three lap lead.

Having won every race and scored 3 pole positions, the 2014 season of the Asian Le Mans Series can definitely be counted as a success for OAK Racing Team Total, having won the title for the second time. It is also great for their drivers, Ho-Pin Tung and David Cheng, who share the title in 2014, as last year David won alone due to Ho-Pin missing one round.

Ho-Pin Tung: “Four races this season, four wins, three pole positions... I don’t think we could have done a lot better than we’ve done, and I think once again it shows that OAK Racing in endurance racing, in LM P2, is the benchmark in the world. I’ve done many races with them this year, in WEC, in the US, and here in the Asian Le Mans Series, and everywhere we’ve always been on the pace and at the front. Winning today the final race of the season is a fantastic result, and a big thanks to Jacques Nicolet, Total and Michelin, who are our big supporters here.“

David Cheng: “We had a really good race today. I’d first like to thank the OAK Racing Team Total team and everyone involved. It’s been a really great two years, racing with the team, and today was the culmination of everything we’ve learnt in the past two years. I think it’s one of my best performances of the year. At the start of the stint, I pulled a 15 second lead over Pu Jun Jin, who is an excellent driver for Eurasia. By the time we pitted, we were a lap ahead. From there, I handed over to my team mates, who did a fantastic job as well. I think our race pace was really fast today. Overall, I’m really proud of the whole team.”

Yuan Bo: “I want to thank OAK Racing Team Total and my two good teammates. This is my first time in an endurance LM P2 car, so I was a bit nervous, but it was ok. I’m still learning. I hope I can do another race next year!”

Patrice Devemy, General Manager of TOTAL Lubricants China Co Ltd: “It’s our 2nd title in a row, and although if we knew the result of the championship since the last race in Shanghai, it was important to close this year with another victory. We succeeded and this demonstrates the quality of the OAK Racing Team Total and of the drivers. Six months after Le Mans 24 Hours, a new squad of 3 Chinese pilots is writing a new page on the development of motorsports in China . Congratulations to David, Ho-Pin and Yuan. »