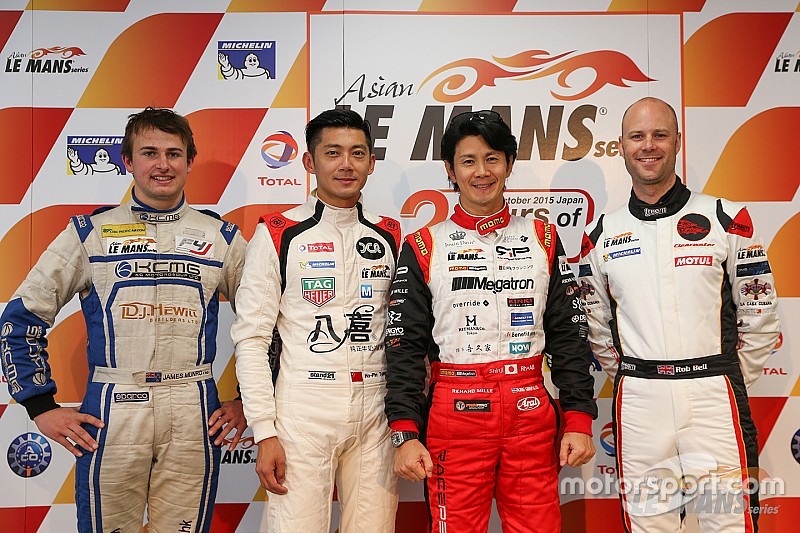 Saturday morning saw the first qualifying session of the 2015/16 season of the Asian Le Mans Series take place, with Shinji Nakano, in the #8 Race Performance Oreca 03R-Judd taking overall pole, with a best time of 1:36.613 around the Fuji Speedway.

“Everything went well. I’m enjoying driving this car, and glad to be back behind the wheel. My lap counter wasn’t actually working, so I didn’t know what time I was doing, so my engineer had to tell me. No problems, no issues. All is going well. It’s the team’s first experience in Fuji and they’re doing really well to put everything together in such a short time.”

So far it’s great to be here. I think the series is in its infancy and it’s going to grow, which is fantastic.

It was also great to see the #99 Eurasia LMP2 finally take to the track, and although they weren’t pushing, as they had to set their minimum lap times per driver, the times looked very promising, as they finished 2nd quickest overall with a time of 1:38.461.

In LM P2, Ho-Pin Tung placed the car on pole, 3rd fastest overall, with his lap time of 1:38.966 in the #1 DC Racing Ligier JSP3. “It’s great to give the new Ligier JSP3 a pole in its worldwide debut in competition. Also, it’s the first race for DC Racing, so it’s great to continue where we left off last year, when we were running in LM P2. The car’s brand new, so we’re still learning, but we’ve been running smoothly throughout the whole weekend so far.”

The #88 and #89 Team AAI ADESS 03 LM P3s had to miss out due to technical issues, but the team is hoping to be allowed to take part in the race this afternoon.

In GT, pole was taken by Rob Bell behind the wheel of the #3 Clearwater Racing McLaren 650S GT3, with a lap of 1:39.484. “So far it’s great to be here. I think the series is in its infancy and it’s going to grow, which is fantastic. I love racing out here, so that’s a bonus, and the weather’s kind this week. And the qualifying session helped, because I’m sitting here in pole, after the Clearwater guys have done a brilliant job to get what was a very last minute deal put together, an old car made into a 650 McLaren, and the car was great. I’m loving it, simple as that.

James Munro drove the #51 KCMG Porsche GT3 Cup during qualifying and managed, with his lap time of 1:45.667, to place the car in 10th on the grid, ahead of a GT car! “It went really well for us. The KCMG guys did a good job. The primary goal for us this weekend is to make sure we keep on running cleanly through everything. We managed to out qualify one of the GT cars, so I guess that’s a success. It’s all going really well so far and I’m really enjoying it, my first time driving a Porsche.”

Win for Race Performance at Fuji