Sean Gelael and Antonio Giovinazzi win the 3 Hours of Thailand 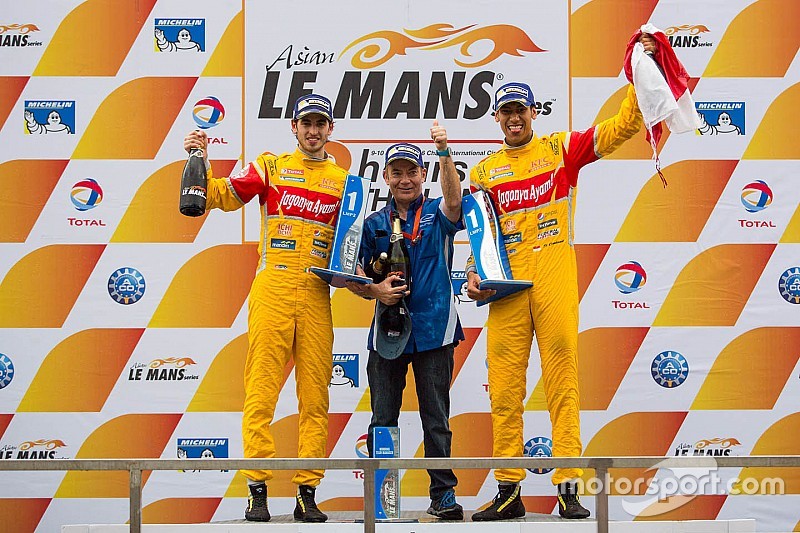 Ho-Pin Tung, Thomas Laurent and David Cheng conquered the LMP3 title for the 2015-16 edition of the Asian Le Mans Series.

Sean Gelael and Antonio Giovinazzi have taken the win at the third round of the Asian Le Mans Series, in the #9 Jagonya Ayam with Eurasia Oreca 03R Nissan, held at the Chang International Circuit in Buriram, Thailand. Not far behind them over the line was the #25 Algarve Pro Racing Ligier JSP2 who came second. The #8 Race Performance Oreca 03R Judd took third place on the podium.

The teams were lucky with the weather in Buriram, with the rain starting just as the chequered flag fell. Otherwise, it was quite a clean race, with the safety car only coming out twice to retrieve two stranded cars.

After a great start in the #9 Jagonya Ayam with Eurasia Oreca 03R Nissan, Sean Gelael suffered a puncture in the left rear tyre, forcing him to pit and fall to the back of the field. After 30 minutes, he had managed to climb back and rejoin the LMP2s, which had been led by Nick de Bruijn in the #99 Eurasia Motorsport Oreca 03R Nissan. De Bruijn had himself taken a great start, from 4th into 2nd on the first lap. As the race went on, the leaders shuffled around, between the #9, the #99 and the #8 each leading for a number of laps. In the second hour Gelael reclaimed the lead and his teammate Antonio Giovinazzi kept it there until the end.

Second across the line was the #25 Algarve Pro Racing Ligier JSP2, driven by Michael Munemann, Dean Koutsoumidis and Jamie Winslow. Having started 2nd on the grid, but suffering from a stop and go penalty, they managed to claim the second step of the podium by the end of the race. Third went to the #8 Race Performance Oreca 03R Judd, driven by Oliver Webb and Nicolas Leutwiler, giving them valuable points toward the championship.

In LMP3, the DC Racing trio of Ho-Pin Tung, Thomas Laurent and David Cheng took their third consecutive class win in their #1 Ligier JSP3. Despite problems with the gearbox, they had a strong race, spending some time up in 3rd overall, and finishing in a comfortable 5th. This win also gives them the LMP3 title for the 2015-16 edition of the Asian Le Mans Series. This also means that DC Racing is automatically selected for the 24hrs of Le Mans this year in the LMP2 class. 2nd place in LMP3 went to the #89 Team AAI ADESS 03, driven by local Tanart Sathienthirakul, along with Masataka Yanagida and Sakaguchi Ryohei. The 3rd LMP3 entry this weekend, the #88 Team AAI ADESS 03, could not take part following yesterday’s crash during qualifying.

It was hard to tell who would come out on top of the busiest class of the Series, the GT class. In the end, the #27 Nexus Infinity Ferrari 458 GT3 crossed the finishing line first. It’s the first podium for the team, with Joshua Hunt and Dominic Ang sharing the wheel. They crossed the line 7,6 seconds ahead of the #5 Absolute Racing Audi R8 GT3, which was driven by Jeffrey Lee, Alessio Picariello and Adderly Fong. The trio made a good comeback, after falling to 7th at the start. Third place here in Thailand went to the #91 Team AAI BMW Z4 GT3, the second podium of the season for the car, this time driven by Junsan Chen, Nobuteru Tanaguchi and Ollie Millroy.

The GTAm team finished with a good result, ending up 12th overall. The trio proved their consistency and reliability once more, with Paul Ip, Martin Rump and Yuan Bo all performing well around the Buriram circuit. This class win definitely clinches their title for the 2015-2016 season.

It was a tough race for the CN class, with neither of the two entries making it to the end of the race. After two hours of racing, the #21 Avelon Formula Wolf Racing GB08 went off on track at turn 8, bringing out the safety car to recuperate it. For the #69 Atlantic Racing Team Wolf Racing GB08, they had a tough start, stopping on track at turn 7 and bringing out the safety car for a few minutes near the beginning of the race. They re-joined and continued, but suffered many issues throughout, due to a faulty oil pressure sensor and engine problems, before being black-flagged for safety reasons after 2h30 of racing.

Sean Gelael: “It’s been a long time since I’ve done a rolling start; it must have been karting 6 years ago or so. It’s something to get used to again. We were already about 3 or 4 seconds clear when the safety car came out. It cut the gap, and then I got a cut in my rear left tyre which gave us a puncture. So I had to pit and we were almost a lap down, so I just pushed really hard. In the two stints I did, we managed to get back in the lead and also in the lead lap, I was really happy with that.”

Antonio Giovinazzi: “The start, like Sean said, we were a bit unlucky, because of the puncture, so we were a lap away from P1 and he managed to get up again. When I took the car, I just drove safe, but not too much. Everything was really good and the team did a good job. I want to say thanks to Eurasia and the sponsors of Jagonya Ayam for this race. It’s looking good for Sepang.”

Michael Munemann: “I’ve never started 2nd, which was always interesting. I hoped to be able to keep up with the professionals, and seemed that I could. It was a bit warm in the car, but besides that everything was perfect. Everything went wonderfully.”

Dean Koutsoumidis: “I hopped in second. There weren’t any issues, the car performed beautifully. We got really hooked up once it got light. We didn’t have any problems, apart from me speeding in the pit lane, which gave us a penalty. That was my gift to the team. Apart from that, the car was wonderful and the team did a great job. I’m still learning and I can’t wait for the next one.”

Oliver Webb: “It was good. We had a half decent start. It was nice and tight into turn one, though it was quite a bit bumpy on the inside. We kind of maintained position, although it was juggled about a bit. The car balance was really nice. We had a main objective to finish ahead of our competitors in the championship. I’m filling in for the last two slots. It was good fun, but at the same time we achieved our goal. And although it would’ve been nice to win, with us leading with 20 minutes to go, we achieved our first goal which was to get more points for the championship”

Nicolas Leutwiler: “My stint was good. First I would like to congratulate the newcomers. I honestly enjoyed myself greatly out there. It was fun, I loved it, the car was perfect, and we achieved both our goals.”

Ho-Pin Tung: “ It was a clean start. A bit of hassle in turn one, the McLaren came next to us, GTs and LMP3s have similar top speed here in Buriram, so I had to defend there to make sure I had a clean run behind the LMP2s. After that everything went quite smooth. Strategy wise it was fine, we refueled under the safety car; about halfway through my stint after that, we started to get Gear Box issues, and lost second gear, so it wasn’t the easiest race for us, but nevertheless very clean race, smooth, and great job from the team at pit stops. Most importantly, we win the championship with it.”

Thomas Laurent: “I had technical problem like Ho-Pin. It’s more complicated to race this car. It was very hot as well. I also had a safety car to deal with. I had a good race though.”

David Cheng: “These guys made it an easy job for me. I took over the car and we were in the lead by quite a bit. Never really worried about that so much. I just wanted to get the car across the line. Our team and everyone from Eurasia did a very good job. From the start of the weekend we were putting out good times thtoughout free practice and qualifying. I was looking early on and we were P3 for a while, probably due to safety cars. But I think if everything had gone smoothly, without any technical issues, we could have been in the mix in the front. Maybe not on the overall podium, but our pace has been good over the weekend. I want to thank the whole team. Third consecutive championship for me and Ho-Pin, and I’m really happy about that. Glad to have Thomas with us as well.”

Dominic Ang: “The start was good. I managed to pass Jeffrey Lee in the Audi on the first turn, then halfway through the safety car I managed to pass Keita Sawa down the back straight, into turn three, and after that I just had to maintain position. Olly was getting close a few times, but I managed to defend the position, before going into the pits to hand it to Joshua, to finish the last two hours.”

Joshua Hunt: “It was long. I double stinted towards the end, so I was close to two hours in the car. Fortunately, we got that safety car in the middle, which really helped us. We had a nice gap going into it, but it did change our strategy, because we were going to double-stint tyres, so it gave us nice fresh tyres for the end. It was a bit of a mystery what our pace was going to be like, because the guys from Absolute Racing with their new Audi have been exceptionally fast this weekend, and also the guys in the BMW. It was nice to be able to do what we did and pull that 8 second gap, and prove we’ve come a long way in this series and hopefully we can stay there.

Paul Ip: “The start was good. Then the safety car came out quite quickly which was also good because it’s quite hot, so normally I do a shorter stint, but because of the safety car, I managed to do a full hour. Otherwise it was a pretty clean run for myself.”

Martin Rump: “It was great. I had new tyres and new brakes, so it felt amazing. I went out for over an hour, which is my longest stint so far. Everything worked out fine. It was good and consistent, and brought it home for Bo.”

Yuan Bo: “I feel good. It’s my first time in a Porsche Carrera Cup car, without TC, without ABS, but it was ok. I am a bit tired because I drove without a coolbox or water system, but it’s ok. I want to thank KCMG guys for giving me a good car.”