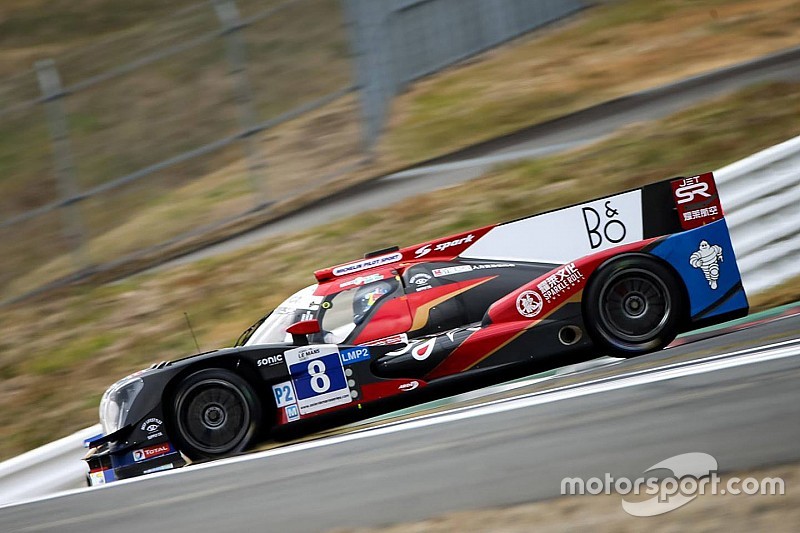 Stage set for Asian Le Mans Series thriller after a tense qualifying session in all classes.

This Saturday will see the running of the third round of the 2017/18 Asian Le Mans Series, the 6 Hours of Buriram, to be held at the Buriram International Circuit, in Thailand. This week has been most notable for the cool weather the teams have experienced – much milder than had been expected, and as the prototype session got under way the ambient temperature was a very comfortable 26 degrees.

Right from the start of the 15-minute session, the fight for pole position between the two Jackie Chan DC Racing X JOTA Sport Oreca 05 Nissans and the #37 BBT Ligier JS P2 was intense. Thomas Laurent in the #8 Oreca, and Pipo Derani in the #37, traded fastest times from the start. Later in the session they were joined by the #7 Jackie Chan DC Racing x JOTA Sport entry with Jazeman Jaafar behind the wheel.

At the end of the session the pole position was still anyone’s, but is was Thomas who just beat Pipo, with Jazeman just 0.107 further behind.

In 4th, and just a further 1.083 behind was Series debutant Gustavo Yacaman in the ARC Bratislava #4 Ligier JS P2 was just 1 second setting the race up perfectly.

In the Bronze Cup it was the #25 Algarve Pro Racing Ligier JS P2 Nissan being driven by Ate Dirk De Jong that led the way.

In the LMP3 Class, it was Josh Burdon in the #18 KCMG Motorsport Ligier JS P3 leading the way yet again. He was quick straight away, sitting 3rd outright in the early stages of the session. Ultimately, he finished 5th outright and the fastest LMP3. 0.862 of a second behind him was the #6 Jackie Chan DC Racing x JOTA Sport Ligier JS P3 with another of the Series debutants, Gabriel Aubry behind the wheel.

After an accident earlier in the day, #65 Viper Niza Racing team put in a huge effort to get their Ligier JS P3 back on track and into qualifying. The team did a great job, handing 2016/17 Asian Le Mans Series LMP3 Champion Nigel Moore a car good enough to set a time just 0.2 behind and this saw him finish 3rd in Class.

In the GT qualifying session things only got more dramatic...

Claiming pole position after the chequered flag had fallen was Ollie Millroy in the #90 FIST Team AAI GT3 Ferrari 488 GT3 by the smallest of margins – just 0.001 – from the #66 Audi Sport Customer Racing Asia by TSRT being driven by Massimiliano Wiser.

Behind them it was a dramatic session for Jesse Krohn in the #91 FIST Team AAI GT3 BMW M6 GT3. While the Audi and the Ferrari continued to trade fastest laps, the team chose to leave him in the pit lane.

Half way through the session Jesse came out but immediately came in again to put on a fresh set of Michelin tyres. He was joined in the pit lane by his team mate in the Ferrari who was also in for fresh tyres.

While they did that, Massimiliano stayed out in the Audi and went to the top of the table.

On track, Jesse instantly went quickest on his first flying lap, but quickly after it was deleted due to a track limits violation. Meanwhile, Ollie in the Ferrari was again setting purple sector times, a last gasp effort saw him grab 2nd place.

At that point, things began to unravel for Jesse. After having his first flying lap deleted, he suffered the same fate for his only other flying lap also excluded. The BMW by then having pitted, was unable to repair the damage to the qualifying session.

This left him with no lap times, and will consequently start at the rear of the field.

In the GT Cup Class, it was reigning Asian Le Mans Sprint Cup Class Champions, Team NZ with their #77 Porsche 997 GT3 being driven by John Curran that was quickest.

“Of course it is also good to see the other team car there with us. We have known Jaz for a long time. He is new in sportscars but he has driven a lot in open wheeler cars and he has shown that he has good pace so we did expect his to be really close, it is nice to have three cars in one team. For us if they can be up and fighting with the BBT car that is a good thing for us.

“It is nice to see Oreca fighting Ligier for the pole as well – it is good for both manufacturers. For now, we just need to stay out in front and we see what happens after 6 hours!”

LMP3 - #18 KC Motorgroup Ltd (KCMG) Ligier Sportscars JS P3 / Josh Burdon: “It is great to get pole, but they are getting closer so we still need to push our boundaries!

“They are a different sort of car, so some normal themes do not work in these sorts of cars so we are always looking outside the box and keep pushing ahead because it is just human nature that they will continue to close the gap so we will just keep pushing!”

GT - #90 FIST Team AAI / AAI Motorsports Ferrari 488 GT3 / Ollie Millroy Racing: “We knew it was going to be tight, it always is and the Audi is even closer this weekend. It was the first time I had driven the car on low fuel and fresh tyres, but my pace has been good all week which is why the team made the decision to get me to do quali and it was fun, it was really fun and obviously a great result!

“We made the decision to stop – it was a plan we had made before the session – as it gives you an opportunity to understand the car better, to get a feel for how it behaves on new tyres before you fit a new set so you know what to expect.

“It is weird having such a big rivalry within the team – we have even got separate drivers rooms and everything thing this weekend! It has got very competitive! Hopefully going forward, the numbers will rise because the level we are racing at is high, it’s really high, especially now with the Audi and the new driver they have got. I think the Audi is going to be the one to beat tomorrow actually – but it is a 6 Hour race and as you know anything can happen in a 6 Hour race!!

GT Cup - #77 Team NZ Motorsport Porsche 997 GT3 / John Curran: “It is very, very good to be back in the Asian Le Mans Series – obviously we missed the first two rounds, but we intend to contest this and the final round in Sepang. We are very fond of the Asian Le Mans Series, both the main Series and the Sprint Cup, and are looking forward to more.

“We have had the car since 2014, we have done a number of 12 - hour endurance races but this is our first 6 hour race in it, but yes we are looking to off load it at the end of this season and replace it with a newer Porsche.

“Today Graham and I were pushing as if it was a sprint race so we are going to need to wind it back a bit tomorrow I think to make sure we make it to the end of the race – taking the curbs the way we were – I am not sure if that is ideal for a 6 hour race!”

The broadcast will kick off at 11:30am local Thai time. the races will also be broadcast live on Motorsport.TV