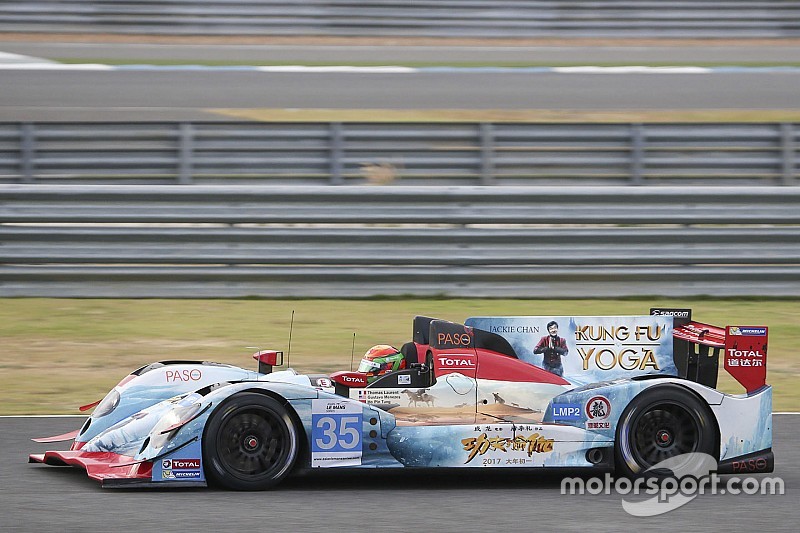 Ho-Pin Tung was quickest overall with the only lap under 1:27 of the weekend so far.

The #35 Jackie Chan DC Racing Oreca 03R Nissan will be starting on pole for the 4 Hours of Buriram, the penultimate round of the Asian Le Mans Series. The best lap in LMP3 was set by the #26 Tockwith Motorsports Ligier JSP3, their second pole of the season. The GT class pole sitter, the #37 Team BBT Ferrari 488 GT3 also claimed their 2nd pole position of the season. Team NZ and PS Racing will start on pole in their respective classes, GT Am and CN.

The hot and humid weather in Buriram is quite a change from the fresh mountain air in Fuji, but the teams and cars are handling it well. Both free practice sessions went by smoothly, one on Friday and one on Saturday morning, letting the drivers get (re)acquainted with the track. The #35 Jackie Chan DC Racing Oreca 03R Nissan was quickest overall out of both sessions, but the other three LMP2 cars were not far off the pace. In LMP3, the Ligier JSP3 and the Ginetta LMP3 all put in good performances, with the #26 setting the quickest free practice lap in FP2 Saturday morning. The GT class saw strong performances from the two FIST-Team AAI BMW M6 GT3, #90 and #91, but also from the Ferrari 488 GT3 of Team BBT, Spirit of Race and DH Racing.

The GT and GT Am qualifying was the first of the two qualifying sessions that took place Saturday afternoon. The top spot was strongly contested, and in the end went to Alessandro Pier Guidi who put a lap of 1:31.858 in the #37 Team BBT Ferrari 488 GT3, the 2nd consecutive pole for the car. Rui Aguas in the #38 Spirit of Race Ferrari 488 GT3 was second quickest, setting his best time of 1:31.889 as he crossed the session’s chequered flag. Third quickest was Tom Blomqvist in the #90 FIST-Team AAI BMW M6 GT3 with a lap of 1:31.972. The top eight cars are within a second of the pole sitter, which predicts close racing to come.

The Prototype qualifying session which followed saw Ho-Pin Tung go quickest overall with a lap of 1:26.954, the only lap under 1:27 of the weekend so far. This gave the #35 Jackie Chan DC Racing Oreca 03R Nissan their first pole of the season. Starting alongside them tomorrow will be the #25 Algarve Pro Racing Ligier JSP2 Nissan thanks to Andrea Pizzitola’s lap of 1:28.443, set just after the chequered flag fell. The second row of the grid will see the #8 Race Performance Oreca 03R Judd in third place thanks to Struan Moore’s lap of 1:27.970, alongside the #24 Algarve Pro Racing Ligier JSP2 Judd in fourth place, with Mark Patterson’s time of 1:29.532.

The car starting at the head of the LMP3 field will be the #26 Tockwith Motorsports Ligier JSP3 after Nigel Moore set the best lap of the class with a time of 1:30.154, a great result for a car that only arrived this morning. The #99 Wineurasia Ligier JSP3 was also strong out on track with Scott Andrews setting a time of 1:30.825. PRT Racing’s #67 Ginetta LMP3 was third quickest thanks to Charlie Robertson’s lap of 1:30.879. All the LMP3s set times that are within 1.401 seconds of the class pole sitter, showing that there is a good balance of drivers out on the field and promising a close fight tomorrow.

The Prototype qualifying session was interrupted halfway through by a red flag, due to the #68 PS Racing Ligier JS53, the sole CN entry, stopping on track at T3. The car wasn’t able to rejoin, but Tira Sosothikul still managed to set a time of 1:49.118 in the couple of laps he managed to do.

Ho-Pin Tung: “I’m very happy with our first pole of the season. We had great success here last year, claiming the LMP3 title. Our pace has been good all weekend. We weren’t very happy with the laps in FP2, but especially after the technical problems we had in the first two races of the season, we’re very glad that the car’s working tip top. Big thumbs up to the team for that. Just four hours to go now. Hoping for a good result and we’ll try to extend the championship lead.

Nigel Moore: “The car got here at 5 o’clock this morning and we were all here waiting for it. The team worked brilliantly to get it all done. We were straight out of the box into FP2 and went quickest. The car was amazing straightaway, which was really good. In qualifying we got a good lap in and got the pole that we want. Now for the four hours and hope to bag some points for the championship and keep the lead.”

Alessandro Pier Guidi: “I’m happy to be here again after Fuji. As usual, the team did an amazing job. We worked very well in both free practices, and my team mates set some of the best times in FP1, so we are a strong team. We will fight hard tomorrow to be up here again.”

John Curran: “Unfortunately we missed the first two rounds but we’re back for this round and will be in Sepang as well. The car’s been completely rebuilt. Fortunately we’re the only GT Cup entry and hopefully we’ll stay out of trouble and still be running after four hours tomorrow.”

Tira Sosothikul: “We still have a lot to learn on the car. It was a shame we only got one lap in before our problem, but we are improving. We hope to do better tomorrow.”