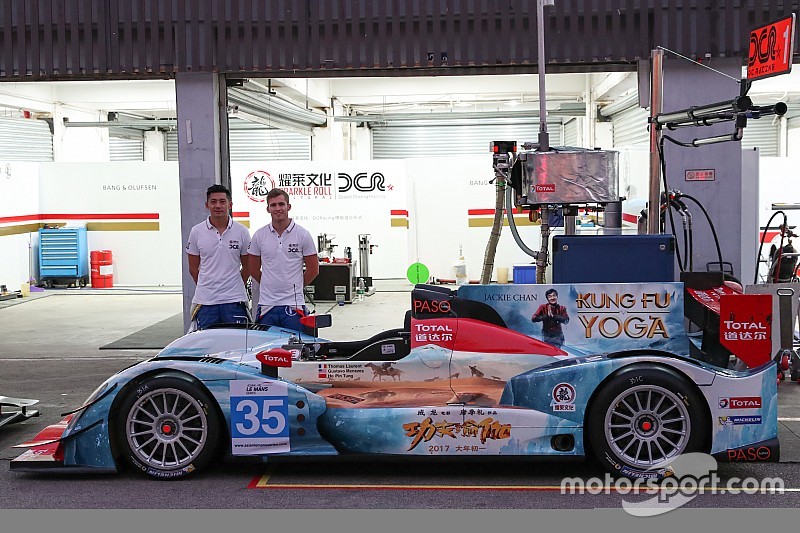 Missing the season opener due to conﬂicting schedule, Thomas Laurent will rejoin Jackie Chan DC Racing from round two onwards, being promoted up to LMP2, after clinching Rookie of the Year in last year’s Asian Le Mans Series and recently this year’s European Le Mans Series as well as the winning the Road to Le Mans race in LMP3.

James Winslow will be back with the team having claiming the Drivers and Team Champion in the inaugural Asian Le Mans Sprint Cup Series for DC Racing.

A new addition to the team, but a familiar face will be Chinese compatriot Jun Jin “Kevin” Pu, a stalwart of the series and coming oﬀ of a strong performances in European Le Mans Series.

“With the growth of asian motorsports and the Asian Le Mans Series, and after a successful ﬁrst season last year and contesting in the World Endurance Championship, it really made sense that we grew our team this season. Although we know the championship will not be an easy job this year, due to the great job Cyrille and the ACO has done to bring a deeper ﬁeld and more competition into play. However, I’m very conﬁdent in the group of people and drivers that we have put together for both programs and it is one that i believe will have us consistently challenging at the front of the ﬁeld throughout the season. Our clear goal is to bring home both titles for the team, our drivers, and all our partners.”

“it is with the great pleasure that we return here to Zhuhai or we have of numerous and good memories. The asian lms 2016 will be a new stage for Jackie Chan and David Cheng with 2 cars committed. Our team is armed to go for the conquest of our 4th title with endurance drivers so experimented as Gustavo Menezes, David Cheng, Ho-Pin Tung, Jun Jin Pu and James Winslow. Thomas Laurent will join our team in Lmp2 from Fuji, this weekend he will be in the Porsche cup ﬁnale. Thank you to Mark Goddard and his team Eurasia for its technical and logistic good support. Thanks again at our main partners Paso, Total Lubricants China, Sparkle Roll Cultural and Bang & Olufsen.“

“ It's incredible to see the momentum of the Asian Le Mans Series; more cars than ever, many factory supported teams- and drivers joining in season 4. I have been part of this championship since the very ﬁrst race, together with David, and have since progressed to WEC. Next week will be our WEC home race in Shanghai, this weekends race here in Zhuhai will hopefully prepare us even better for that. It's great to be back in LMP2 again for the Asian Le Mans Series and I will ﬁght hard to try claim a fourth consecutive title!“

“I'm extremely excited to be joining DCR for the 2016/2017 Asian Le Mans series! Throughout 2016, David, Ho-pin, and I have worked closely together. It's been an extremely successful rookie season for me with the win at the 24 hours of Le Mans, as well as a strong lead in the FIA WEC championship, and the special opportunity to take part in the LMP1 rookie test for Porsche. I want to thank David Cheng, Jackie Chan, and Sparkle Roll group for the opportunity and I am looking forward to getting on track and pursuing a strong winter in the Asian Le Mans Series!“

“I'm very happy to make this championship, I have a lot of good memories from last year, I look forward to be there and to drive the LMP2. it is still a step to overcome. In one year I went from KZ2 to LMP2 it's just incredible. Thanks so much David for this opportunity and a big thanks to Paso who follows me since the start of my career!“

“I'm really looking forward to joining DC Racing for this years Asian Le Mans Series, especially after such a great run with them in the Asian Le Mans Sprint Cup this year in which we won the title. The team work well together and driving alongside my experienced team mates of David Cheng and Kevin Pu will make us a strong package to again ﬁght for another championship and continue the winning ways of the team. “

“It is with great joy to join this Chinese team, I have raced together with James before in Asian Le Mans series and against David, i know we will be a strong team with us combined to ﬁght for win and hopefully the championship!“