OAK Racing Team Total's all-Chinese team managed to convert their pole position start into a victory ahead of their close rival #18 KCMG.

OAK Racing Team Total's all-Chinese team of Ho-Pin Tung, David Cheng, and Shaun Tong managed to convert their pole position start into a victory ahead of their close rival #18 KCMG, on another hot day at Zhuhai International Circuit. Starting from the front David Cheng spent a long time in OAK's Morgan-Judd LM P2 with no one to chase, however behind KCMG's James Winslow was bearing down on him.

The KCMG team worked tirelessly to get the car ready for the race, and starting from the back of the grid Winslow quickly made his way into second place in the Oreca-Nissan LM P2. By the end of KCMG's first stint the gap was only 6 seconds. However in stint number two OAK's 17-year old Shaun Tong drove a very mature race to stretch the lead to 30 seconds from KCMG's Jordan Oon, both young-men racing in LM P2 for the first time. 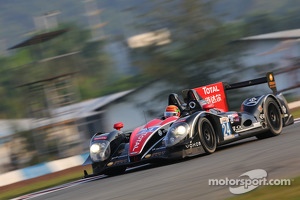 After Tong handed over to Ho-Pin Tung, who got OAK's pole position in Qualifying, Tung was able to use all his experience to maintain OAK's lead and drive them home to victory. This was despite very quick lap times from KCMG's Gary Thompson, including the fastest lap of the day 1:30.807. In the end OAK passed the checkered flag 58.67 seconds ahead of KCMG.

In GTC #77 AF Corse had their second win of the season, and wrapped up the GTC Team Championship, securing their place at the 2014 24 Hours of Le Mans race. After very strong Free Practice and Qualifying sessions earlier in the weekend AF Corse went into today's race with great momentum. However #37 BBT, who started third on the grid, were also having a good weekend and posed a big threat.

The race started very tightly with Steve Wyatt and Anthony Liu driving the first stints for the two teams. Liu was able to pass Wyatt in the first lap however the two remained close throughout. Michele Rugolo took over from Wyatt and was able to re-capture the lead for AF Corse. He handed over to Andrea Bertolini who drove very well to finish off the race ahead of #91 AAI-RSTRADA (driven by Jun San Chen, Takeshi Tsuchiya, and Tatsuya Tanigawa), and #007 Craft Racing (driven by Darryl O’Young and Keita Sawa). AF Corse's Rugolo praised the work of the pit crew, and their quick pit-changes, as being a great help in getting them the win.

The #70 Taisan Ken Endless came back from a disappointing Qualifying session yesterday to finish 4th overall and top in GTE. The all Japanese team of Naoki Yokomizo, Akira Iida, and Shogo Mitsuyama drove very consistently as a team, including a fastest lap time of 1:36.827. The drivers as well as the pit crew have been working all weekend to get the quickest times out of their Ferrari 458 GTE, reflected in their strong performance today. As usual the team were all in very high spirits after the race.

With Round 3 successfully completed in an excellent display and celebration of motorsports in Asia, focus now moves to the final round of the 2013 Asian Le Mans Series - Round 4 and 3 Hours of Sepang on the 8th of December. KCMG and OAK Racing Team Total are now separated by only 4 points in the LM P2 Team Championship. With an invitation to 2014 24 Hours of Le Mans on the line it is going to be a very tense final round for the two teams.

Despite already sealing the championship AF Corse stated their intent on finishing the season with a win in Sepang. Having claimed the first 24 Hours of Le Mans invitation there is one more avaliable in the GTC class. Craft Racing's Ford GT3 was not as competitive as the Aston Martin Vantage GT3 they have used in previous rounds, however with the Aston back in Sepang, AF Corse looking to wrap up the series with a win, AAI-RSTRADA going from strength-to-strength, and BBT looking very quick, 3 Hours of Sepang is going to be a thrilling finale.

Victory for Ho-Pin Tung on the 3 Hours of Zhuhai