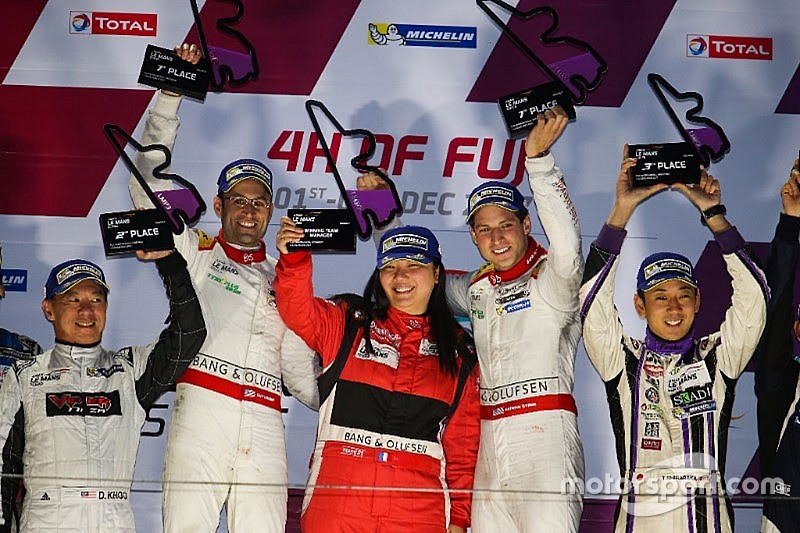 The race win moved the two American racers to the top of the provisional LMP3 point standings after Round 2 of the Asian Le Mans Series.

Strong pace and some great racecraft from Byrne saw the No. 6 Ligier LMP3 move up from fifth to second during his opening stint in the three-class field.

Returning to the fray after a well-executed pit stop, Cosmo jumped in and made a big move under braking to take the lead and then never looked back. Despite enduring an exhaust leak and a small issue with his tires, Cosmo set his focus on breaking away from the pack and created an incredible 60-second lead over second place.

Once the gap was established, the Cosmo and Byrne entry continued to grow its advantage, scoring the victory by multiple laps to bring Jackie Chan DC Racing x Jota Sport team a sweep of the event as the sister entry took the overall race victory.

“The car was hooked up and it's really satisfying to travel this far, be in a new country, learn a new race track and be as competitive as we were pushing us to take home the win,” said Cosmo. "For me it was a really great day. We battled through some issues at the end but really it was a flawless race. Patrick (Byrne) did an amazing job and we had an excellent execution for the pit stops and the strategy. It's even more exciting to be leading the championship and it gives us a lot of momentum going into the next two rounds."

This Asian Le Mans Series win marks the first professional victory for Byrne following a continued development as he now eagerly looks forward to adding to his burgeoning racing resume.

"It was a phenomenal race and great teamwork by both Guy (Cosmo) and I working together with the team on a survival strategy," said Byrne ."The tires pressures were an issue but other than that we were able to keep the car under us. It was a huge win and we really needed that for the team. This was my first true international pro win - I've won a lot of races before but never in a high-profile pro series. It felt great and we were able to represent the team well."

Cosmo and Byrne will return Asian Le Mans series competition in the points lead as the duo will look to make it back on the top of the podium as the second half of the season gets underway at Buriram, Thailand on January 11-13.