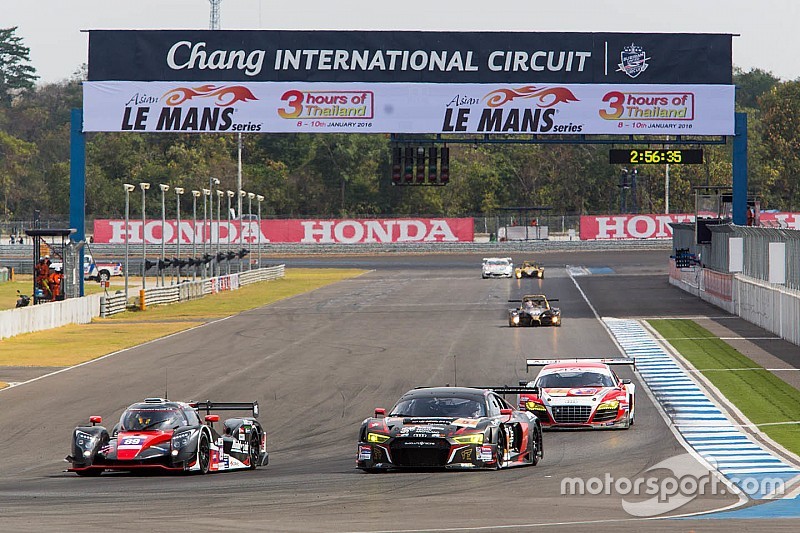 Asian Le Mans Series crossed the halfway mark and the teams are heading for a busy month of January with round three, the four hours of Buriram in Thailand.

After a short winter break, the Asian Le Mans Series will be heading to the Chang International Circuit in Buriram, Thailand for the third round of the 2016-2017 series. Held over three days, from the 6-8th of December, this event will see the teams of each category continue their fight for the titles and, for some, their chances to take part in the 24 Hours of Le Mans in 2017.

At the halfway mark, the points are all still really close, with no one team having dominated both rounds one and two at Zhuhai and Fuji.

In the LMP2 class,Jackie Chan DC Racing is currently leading with the #35 Oreca 03R Judd with 43 points, after a win and a podium from the first two rounds. Algarve Pro Racing aren’t far off, with the #25 Ligier JS P2 Nissan crew on 32 points and the #24 Ligier JSP2 Judd on 30. Having won Fuji but not finishing the race in Zhuhai, the #8 Race Performance Oreca 03R Judd rounds off the LMP2 table with 25 points. There are still 52 points on offer over the next two race weekends, so it’s still wide open.

In the LMP3 class, the #26 Tockwith Motorsports Ligier JSP3 is leading the points table with 44 points, having a win, a podium and a pole position to their name. Jackie Chan DC Racing’s LMP3 entry, the #1 Ligier JSP3, is only 4 points behind after their performance so far this season. ARC Bratislava’s two entries are next in the points, with the crew of the #4 Ginetta LMP3 in third with 30 points, and the #7 Ginetta LMP3 in fourth with 22 points

In the GT Class, the #5 DH Racing Ferrari 488 GT3 team is currently topping the points table with 37. VS Racing is sitting second with 27 points for their #6 Lamborghini Huracan GT3. The crew of the #38 Spirit of Race Ferrari 488 GT3 are very close with 26 points and Clearwater are 4th in the GT points with 24 thanks to their #61 Ferrari 488 GT3.

Round three in Buriram will see a field of 27 cars take to the track, with the whole field from Fuji joining us for round three, apart from the GT Cup entry TKS and the #92 Team AAI AMG GT3. This means that there will be action from 4 LMP2, 9 LMP3 and 12 GT3 cars, as well as a GT Cup entry and a CN entry.

Team NZ, 2016 GT Cup Champions in the Asian Le Mans Sprint Cup, will be joining us from Buriram onwards in the GTCup class with the #77 Porsche GT3 Cup, with drivers Graeme Dowsett, John Curran and Paul Kanjanapas sharing the wheel. PS Racing are bringing their Ligier JS53 back for another round, with Kenji Abe, Akihiro Asai and Qin Tianqi back to share the wheel after missing out on Fuji.

#77 Team NZ Porsche 911 GT3Cup John Curran: “Unfortunately due to work commitments, we could not contest the first two rounds of the series, nonetheless we will be ‘all out’ for the remaining two rounds. To that end, the car has had a major overhaul and a new beating heart. This time last year we were preparing for Bathurst 12Hr which was strangely successful, so we are all looking forward to a new and exciting start to the 2017 season. Graeme and I are very excited to share the seat with Paul, a good friend to Team NZ and a great driver. With CQ in charge and Will Bamber coming to driver coach, I can only suspect there will be as much fun off the track as on it.”