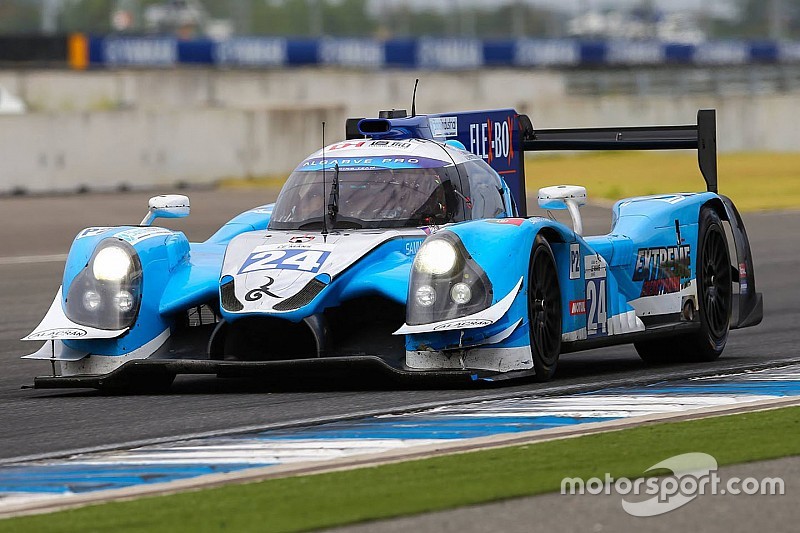 The #25 Algarve Pro Racing Ligier JSP2 Nissan will start on pole for the final race of the 2016-2017 Asian Le Mans Series in Sepang. Andrea Pizzitola went quickest overall today in the hot and humid weather, claiming his third pole of the season, with a best time of 1:55.279, 0.008 ahead of the #35 Jackie Chan DC Racing Oreca 03R Nissan that will be starting on the front row alongside them tomorrow afternoon. The #26 Tockwith Motorsports Ligier JSP3 was quickest in LMP3 with a time of 1:59.345. The GT class pole sitter is the #3 DH Racing Ferrari 488 GT3, and the #96 TKS Porsche 911 GT3 Cup took the GT Cup class pole.

The free practice sessions saw a few red flags as the teams got to grips with the final circuit layout of the season. The second session was quite damp and saw a bit of rain but it didn’t cause too much disruption. All 25 cars took part in both sessions and the #25 Algarve Pro Racing Ligier JSP2 Nissan went quickest overall with a time of 1:55.896 in the morning session. The #26 Tockwith Motorsports Ligier JS P3 was the quickest LMP3 car in both sessions. The #90 FIST-Team AAI BMW M6 GT3 was the fastest GT car out of both sessions, and the #77 Team NZ Porsche 911 GT3 Cup the quickest in the GT Cup class. The newcomer this round, the #93 FIST-Team AAI ADESS 03 had a few issues and ended up in the gravel in both FP1 and FP2.

Qualifying got underway in the late afternoon, and saw Algarve Pro Racing continue their strong start to the weekend, taking pole for tomorrow’s four-hour race with the #25 Ligier JSP2 Nissan.

The GT and GT Cup qualifying session was the first to take place and was interrupted by a red flag early on due to the #77 Team NZ Porsche 911 GT3 Cup getting stuck in the gravel at T1. Once that was sorted, the session resumed and saw Alex Riberas claim the first pole of the season for the #3 DH Racing Ferrari 488 GT3, setting a time of 2:02.375. Although he tried and came very close, Alessandro Pier Guidi couldn’t claim his third class pole of the season in the #37 Team BBT Ferrari 488 GT3, setting a time of 2:02.379, a mere 0.004 behind the class pole sitter. Third quickest in the GT Class was the #31 Team Audi Korea Audi R8 LMS GT3 with Malaysian Alex Yoong at the wheel, the best qualifying result for the Audi this season, with a time of 2:02.540. The GT Class is incredibly strong and close here in Sepang, with the 9 top cars setting times less than a second off the pole sitter’s pace, showing how well the class’ BOP is balanced.

Then followed the LMP qualifying session that ran without incident. It was a very close battle for the overall pole between the #35 Jackie Chan DC Racing Oreca 03R Nissan and the #25 Algarve Pro Racing Ligier JSP2 Nissan. In the end, Andrea Pizzitola claimed the top spot for the #25 Ligier JSP2 Nissan, a mere 0.008 ahead of Ho-Pin Tung in the #35 Oreca 03R Nissan. Struan Moore in the #8 Race Performance Oreca 03R Judd set a time of 1:55.544, also a very strong time. Michael Munemann set a best lap of 1:58.103 in the #24 Algarve Pro Racing Ligier JSP2 Judd, placing them 4th.

In the LMP3 class, Nigel Moore in the #26 Tockwith Motorsports Ligier JSP3 set the best time in his final lap, with a time of 1:59.345. 0.133 seconds behind him was Scott Andrews in the #99 Wineurasia Ligier JSP3. Third best time was the #1 Jackie Chan DC Racing Ligier JSP3, thanks to James Winslow’s 1:59.597 lap. The strongest Ginetta in the session was the #67 PRT Racing Ginetta LMP3, 5th in class, thanks to Charlie Robertson’s lap of 1:59.676. The #93 FIST-Team AAI ADESS 03 had Ryohei Sakaguchi set their quickest lap of 2:04.607. The top 7 in the class are within a second of the pole sitter, announcing strong fights to come in tomorrow’s main event.

See you tomorrow for the final race of the 2016-2017 season of the Asian Le Mans Series, starting at 12:15 local time, which will be streamed online with commentary from DSC’s Graham Goodwin.

Andrea Pizzitola: “I was pretty nervous in the car. When your engineer tells you that you are P2 by tenths off, that’s ok, but when you’re P2 by one tenth, you can’t go back into the box in P2. You just have to push every lap, and I was so close to the other guys. I had really good traffic management from my team. I’m really happy about this pole.”

Nigel Moore: “It’s my first time at the circuit, so we’re still trying to get to grips with the circuit and getting the car adapted the best we can. The start of qualifying was all right. I wasn’t very happy, so came in and made a change. Then went out to do one flying lap, which I didn’t think was going to be enough at all. But it got us the pole that we needed and the extra point. Well done to the team, I’m really happy.”

Alex Riberas: “First of all I want to congratulate the other guys for their good job today. I have a special feeling right now. We came together as a team to Sepang, for me it’s the first time here, so we had to work a little bit to learn the track with our team mate Michele Rugolo who knows the track from the 12 Hour race. We did a lot of work together to try to improve ourselves. We are still battling to win in this championship as a team. To gain the one point advantage for the race is a mental victory for us. Tomorrow we’re still in the hunt for the championship; we’re third and our sister car is first. We will work as hard as we can to do our best, and hopefully we’ll come back as champions.”

Shinyo Sano: “Thank you very much to our team and mechanics. This Sepang circuit is very difficult for me, but I managed to take the pole position. We’re all happy. Tomorrow, I must win, as there is another team in the class with the same points, so I must win.”