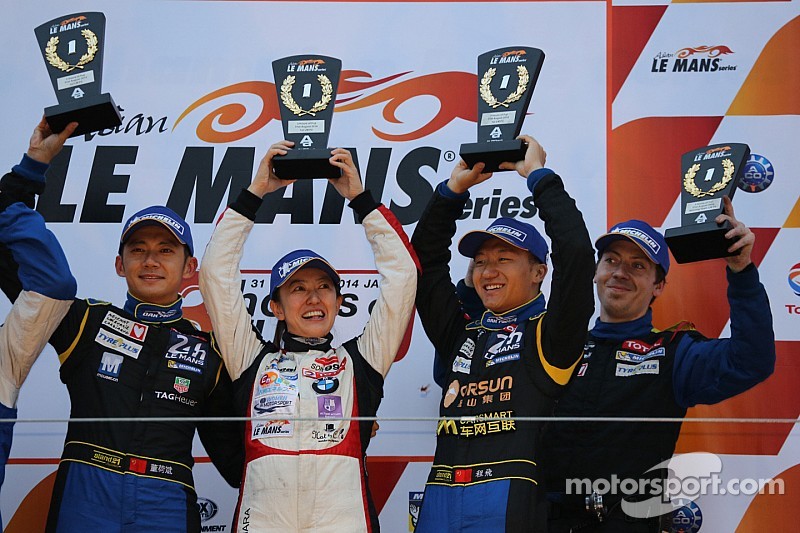 3 Hours of Fuji was successfully staged at Fuji Speedway

This afternoon saw another step forward for endurance racing in Asia as 2014 Asian Le Mans Series 3 Hours of Fuji was successfully staged at Fuji Speedway.

OAK RACING TEAM TOTAL made it 2 from 2 in the LM P2 class when Keiko IHARA, David Cheng and Ho-Ping Tung drove their #1 Morgan Judd to victory in a tight fought battle with Eurasia Motorsport. Eurasia’s #27 LM P2 Oreca Nissan qualified in pole, however their advantage disappeared in an instant as Richard Bradley had trouble starting the car on the starting grid. After the problem was fixed OAK has already taken a 2 laps.

Keiko IHARA drove a quick opening stint for Oak but her car had some issue on lap 23 which result in a crash into a tire wall. The car incurred some bodywork damage but luckily it was not too serious and she was able to make it back to the pits in one piece. Eurasia’s Bradley seized the opportunity to retain the lead.

The race turned again later when Eurasia’s was given a two minutes penalty for the assisted start at the grid which enabled OAK’s David Cheng to retake the lead from PU Jun Jin from Eurasia Motorsport on Lap 52. OAK’s Ho-Pin Tung took over at the 1 hour 45 mins and produced some very steady lap time to bring his team home to the checkered flag in 1st place.

The CN, GT, and GT-AM classes

In the CN class, Denis Lian from Team AVELON FORMULA’s #21 WOLF GB08 car started aggressively and led in the early part of the race.  Craft-Bamboo Racing who had qualified first, held on well through Samson Chan who managed to take the lead in the later stage of the 1st stint. Craft’s 2nd driver Kevin TSE’S then kept his team in P1 and once he handed over to star driver Mathias Beche on lap 54 the result was never in doubt and Craft-Bamboo romped home to 1st place.

In the GT category Team AAI’s #91 car, who started second on the grid, also had a good weekend by taking P1. The race started very tightly with all GT cars changing places. Jun San CHEN led his #91 BMW Z4 to the lead in the first stint and handed to Carlo van DAM.

However #90 Takamitsu Matsui who took over from Yu Lam chased down Carlo van DAM, to take the lead in the 2nd stint among. The battle between #90 and #91 was very close right through the race. However the #90 SLS AMG suffered some technical issues and was not be able to finish the race which meant #91 retook the lead and 1st place of GT class.

In GT-AM class, the #82 Lamborghini Gallardo from The EMPEROR RACING did not make to the grid which left the other EMPEROR RACING #11 car to take 1st place.

The Spirit of Le Mans racing to Fuji combined with Japanese motorsports passion, was everywhere throughout the weekend and was clearly enjoyed by all those who attended the event. Asian Le Mans Series would like to extend its sincerest thanks to Fuji Speedway owners and management for their excellent support for the operation and promotion of 3 Hours of Fuji in Japan.

Lamborghini Huracán is official pace car for 3 Hours of Fuji