Lloyd puts in stunning drive to claim victory in Shanghai 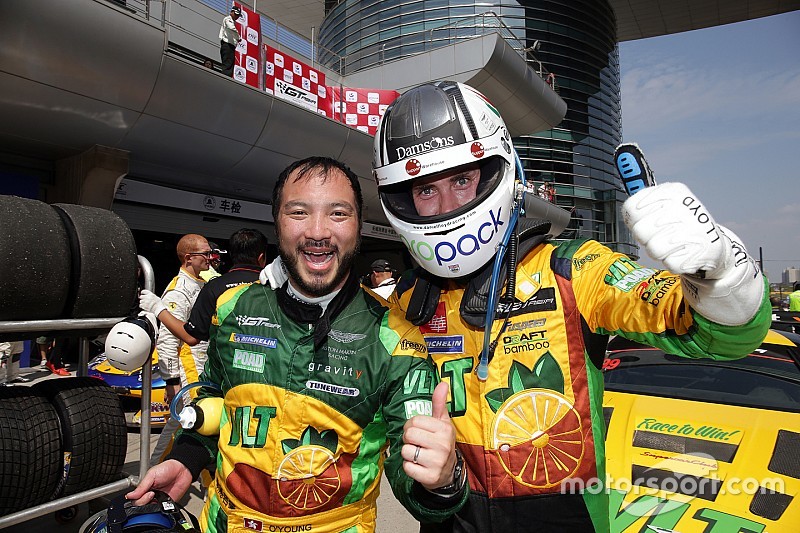 There were few people ready to declare their status as favourites for the opening 50-minute race at Shanghai, and as the event unfolded, there was good reason why.

After a stunning qualifying period which saw one of the closest sessions in GT Asia Series history.

Craft-Bamboo Racing started from pole position, and Richard Lyons did everything he needed to lead into the compulsory pit stop, but not long after all the stops were completed, the landscape changed dramatically after a sequence of events that happened in quick succession.

First race leader Frank Yu was turned around in turn two, whilst at the same time, Australian Rod Salmon endured one of the biggest crashes in GT Asia Series history after firing into the Armco on the inside of the main straight on the run to turn one, destroying the front of the FFF Racing McLaren 650S but emerging - thankfully - unscathed.

By the time the safety crew had removed the #15 McLaren there was little time left to make an attack, but that’s exactly what new Craft-Bamboo recruit Daniel Lloyd did, to forge his way from fifth to the front with an impressive display of raw talent, in the process claiming his second win for the team in as many starts and handing Daryl O’Young back the championship points lead.

Unlike the closing stanza of the race, the opening leg ran relatively trouble free, with the exception of an unpredictable tyre failure on the roll-around lap on the right rear of Fairuz Fauzy’s OD Racing Lamborghini, the Malaysian driver returning to the pits where the team were forced to cut away part of the rear bodywork just to make a pit-lane start.

At the pointy end though there were no such drama and despite the tight turn 2-3 complex, the field got through unscathed led by Lyons who protected well to lead Ferrari stars Carlo Van Dam and Alessandro Guidi into lap two.

Whilst much of the field managed to hold station, new Ferrari recruit Max Wiser charged from the sixth row through to seventh on the opening lap, displacing a number of international stars including Andy Meyrick and Matt Griffin.

Ultimately though it was Lyons who led into the compulsory pit stops [CPS], but not before coming under fire from Van Dam and Guidi, the Ulsterman though stretching the advantage out until the closing stages of the pit window to carry an almost two-second lead into the stop.

By that stage his team-mate Daniel Lloyd was charging in the #99 VLT Aston Martin having taken over from team-mate O’Young who had hit the pits early in the window from the tail of the top ten.

After the stop, Frank Yu rejoined in the lead, but was soon under fire from TP 12 Racing’s Piti Bhirom Bhakdi who despite losing second to the #1 Clearwater Ferrari, was quickly around reigning champion Mok and onto the tail of the Interush Aston Martin.

Piti knew he needed to get through on Yu quickly, but the Aston was up to the challenge, however the Thai driver was settling into a rhythm much quicker than his rival, and put Yu under pressure into the busy turns 1-2-3 complex, firing up the inside on the run into turn two. Yu defended, but left just enough room for Piti to make a move, the two cars making contact at the apex, spinning Yu around.

That allowed the hard-charging Anthony Liu to slip through for second as Yu gathered things up and continued on in third.

Whilst all this was happening, one of the biggest accidents in GT Asia Series history was unfolding on the front straight.

Two-time Bathurst 12-Hour champion Rod Salmon was enduring a tough opening lap in his stint in the #15 FFF Racing Team by ACM McLaren which had developed a technical issue on the back straight, forcing the Australian to work through some remedial work with the electronics on his run down the front straight.

His lack of pace had allowed the front-running GTM class Ferrari of James Cai to catch him on the run to turn one, the Ferrari catching Salmon on the outside as they hit the braking marker. Unfortunately for the McLaren driver, he was also suffering from a lack of vision on that side of the car after the mirror was damaged during qualifying when team-mate Nathan Antunes clipped a tyre bundle on the final corner.

Ultimately Salmon moved across slightly on the Ferrari, unaware that it was there, spinning the McLaren hard into the inside fence, in an impact that tore off the left front wheel and destroyed the front of the gorgeous 650S GT3 in an accident very similar to that which had claimed his FFF team-mate Hiroshi Hamaguchi 12-months prior on the exit of turn 10.

Despite the collective drawn breaths from the pits and his peers, Salmon emerged unscathed and returned to the paddock.

Understandably, the race director called a Safety Car intervention, whilst they recovered the stricken McLaren - the hit so bad that the supporting WTCC was later forced to cancel their qualifying session once officials decided that sections of the Armco railing needed to be replaced..

Almost 10-minutes was lost behind the Safety Car as officials removed the stricken McLaren. At that stage Piti was race leader in the #11 Ferrari, from Mok in the #1 car, then Yu, Anthony Liu, Lloyd, Andrew Kim in the #77 Bentley, Richie Wee in the second Clearwater Ferrari and points leader Adderly Fong in the #8 Bentley.

Sadly for Frank Yu, his time at the front was once again challenged, after contact from behind on the restart on the run into the final turn saw him spun around once more to watch the entire field stream past before he could once again right himself...

At the same time, team-mate Daniel Lloyd made a move on the #37 Ferrari of Anthony Liu who had made contact with Yu, to take away position three, the young Englishman then quickly through on Mok into turn three.

From there he turned in some stunning laps to catch Piti just two laps out, but the Thai driver wasn’t going to gift the Aston Academy driver a win, forcing him to work for the position, a situation which ultimately allowed Liu to close and in fact move into the lead on the penultimate lap in a drag race between turns 14 and 16.

Ultimately that led to another drag race with Piti, Liu and Lloyd going three wide into the braking zone at turn one, the Aston though putting in one of the moves of the year to out-brake both Ferraris on the outside and drive around them into the fast turn one right-hander.

From there it was all Lloyd who crossed the line to take his second win in two starts, whilst behind him Liu managed to take the position away from Piti for second, the Thai Ferrari falling back to third and into the clutches of Fong in the #8 Bentley who fell just short of a podium finish.

Fifth was Hiroshi Hamaguchi in the #55 McLaren, the experienced Japanese driver having worked his way up from tenth after team-mate and McLaren factory driver Alvaro Parente was forced to come through the pack from the rear of field after a technical issue forced them to miss both qualifying sessions.

Mok ultimately fell back to sixth on a circuit he readily admits is one of his least favourites, with Andrew Kim claiming seventh on his debut for the JV Global Bentley team, the South Korean driver having taken the reigns from Englishman Duncan Tappy who was fourth at the CPS.

After what can only be described as a ‘challenging’ race, Frank Yu recovered for eleventh, with Philip Ma and Ho-Pin Tung recovering from an opening lap pit stop to claim twelfth in the Absolute Racing Audi.

In the battle for GTM class honours, it was all about the #20 Gulf Racing JP Porsche 991 Cup Car of Hisashi Kunie and Belgian GT points-leader Dylan Derdaele, the young Belgian driver completing the opening leg in an impressive tenth place despite the big performance gap to the outright cars, handing his Japanese co-driver a comfortable lead, a lead he held to the flag.

Second - despite the contact with the Salmon McLaren - was Kenneth Lim and James Cai, with the Siu brothers third in their ageing Porsche GT3-R, the GT Asia Series veterans a popular addition to the GTM class podium. Sadly for runaway points leader Jerry Wang, his opening race saw a lonely run to fourth, in the process losing some serious ground to title rival Kunie who is hoping to duplicate the opening race result in Sunday afternoon’s second race.

Craft-Bamboo claim the double in qualifying at Shanghai