Craft-Bamboo Racing tied for championship after incredible comeback in Thailand 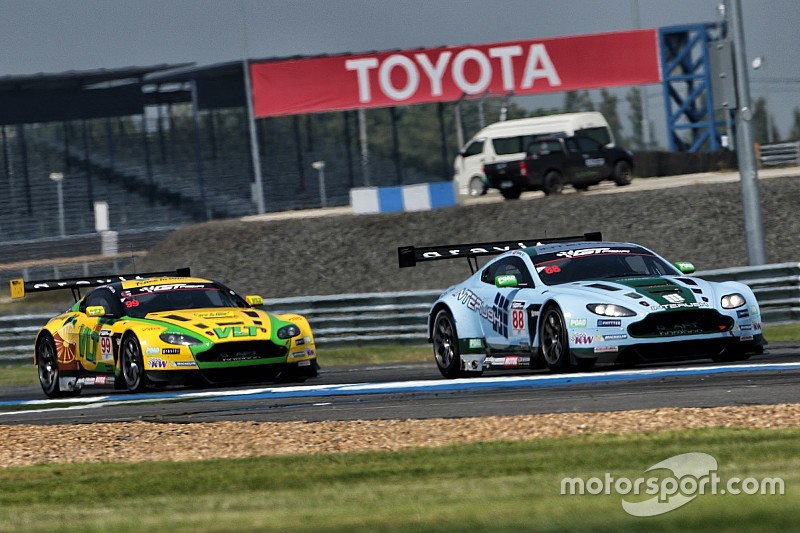 Darryl O’Young and Daniel Lloyd were able to carve through the field and take P4 by flag fall.

Darryl O’Young is once again tied for the GT Asia Series Drivers’ Championship after an astounding fight from the back of the grid, due to contact during qualifying. With the help of teammate, Daniel Lloyd, the pair were able to carve through the field and take P4 by flag fall. The resulting points haul has kept O’Young in a prime position to take the championship, when Lloyd starts in P2 tomorrow, thanks to his stunning flying lap this morning. Richard Lyons and Frank Yu started from P6, staying at the front end of the field for the entire race, where after a hard push they finished in P6.

After contact forced O’Young off the track and into the gravel in qualifying, the #99 Aston Martin didn’t have a chance to set a flying lap and would start in P19. The car was beached on the gravel and it seemed it wouldn’t make it back before the second session. It didn’t and was unloaded off the flatbed with only five minutes left! The crew performed flawlessly to send the car out with less than three minutes left on the clock, giving Lloyd only one lap to qualify for race two. With only one chance, he stitched together each sector with laser like precision and speed, crossing the line as the clock hit zero and secured P2 for the second race.

What an incredible day, the unthinkable happened in qualifying and really put us on the back foot.

Starting from the back, O’Young knew how much of a challenge it would be but was determined to fight for every position and championship point. By the first corner, O’Young dove down the inside to take an incredible six places and gave chase to the leaders. From here, the Hong Kong driver fought hard to close the gap between those ahead, catching the tail of P11 before diving into the pits to change to teammate Lloyd. The young British driver rejoined the pack and was instantly on the pace, taking P11 within a few laps. From here, Lloyd rose to another level and began to carve through the field with blinding pace. He reeled in the competition, taking a further seven places with some superb overtaking maneuvers to secure P4 by the end of the race.

Lyons began the race in P6, getting a smooth start and holding his own as the grid aggressively jostled for position. Giving chase to the competition, Lyons settled into a fast rhythm, showing great pace through the middle sector but lacking the top end speed to challenge the leaders. Even so, Lyons pushed and handed over the #88 Interush Aston Martin to teammate, Frank Yu, in P5. Frank got up to speed, retaining P5 and focusing his attention on capturing the leaders. His consistent driving style allowed him to close in and eventually take fourth. As the race entered its final stages, the #99 VLT Aston Martin of Lloyd made its move past Frank but he continued to push until the finish, crossing the line for the final time in P6. With both cars scoring a good deal of points today, the teams’ championship is still up for grabs but it will be a difficult task.

The #99 VLT Aston Martin will be starting in P2 tomorrow, with Lloyd aiming to get the jump on the Bentley at the start in the hopes of repeating their runaway victory in Shanghai to take the drivers’ championship for 2015. Frank will be starting in P7 and with the pace they showed in race one will certainly be podium contenders.

Richard Lyons, Driver: “We got a pretty good start; it was very close battles all the way through the first lap. We seemed to have pretty good pace, especially through the middle part of the circuit but we just didn’t have the speed on the straights. Frank took over, did a fantastic job and got us sixth place.”

Frank Yu, Driver: “I was really happy with the car today, I had some good pace and was able to challenge at the front of the field. I made a small mistake at the end which cost us a position but the team did an excellent job with the car and we were able to take home some good points.”

Darryl O’Young, Driver: “What an incredible day, the unthinkable happened in qualifying and really put us on the back foot. Craft-Bamboo Racing has done an amazing job staying positive and making a recovery which we did. It was definitely damage limitation today and we will have to focus on tomorrow’s race, which will be a real nail biter. We are just going to have to give it 100 percent tomorrow.”

Daniel Lloyd, Driver: “We always knew it was going to be tough, we were starting on the back foot. Darryl did a solid stint and handed over to me, I went out and my pace was good but I was down in p12. The car was really consistent; I got into my rhythm and did some really good overtaking moves at the end. I was over the moon to bring it home in fourth and it’s all to play for tomorrow.”

Richard Coleman, CEO of Craft-Bamboo Racing: “It was a tough start to the day in qualifying which made for a difficult race one but the team did a superb job of getting the car back out for Q2 which means we will be starting on the front row tomorrow. #99 had a mega drive from the back of the grid and to take fourth was a great result. We are currently tied for the drivers’ championship and will be fighting to take the title tomorrow.”