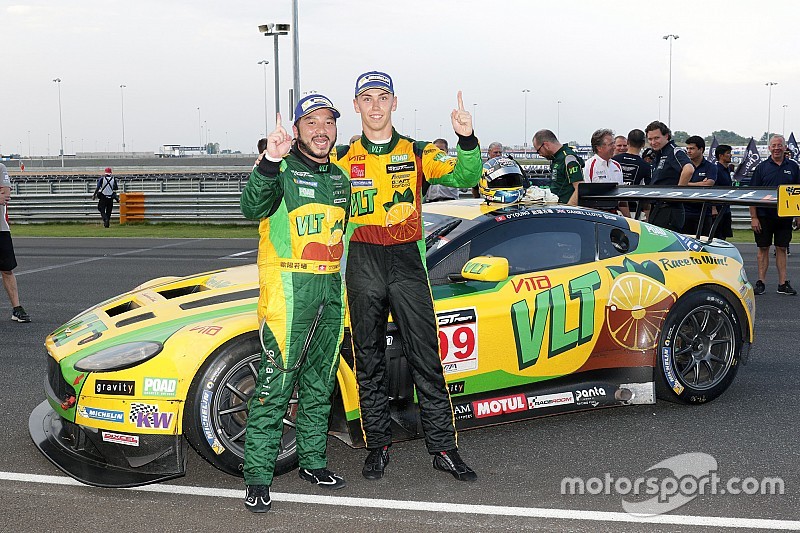 After teammate, Daniel Lloyd, started from P2 and took an early lead, the #99 Aston Martin pulled away from the competition and O’Young was able to continue expanding the gap until crossing the line to take the title.

Craft-Bamboo Racing driver, Darryl O’Young took the 2015 GT Asia Series drivers’ championship in an incredible nail biting finish to end a roller coaster weekend of racing in Thailand. After teammate, Daniel Lloyd, started from P2 and took an early lead, the #99 Aston Martin pulled away from the competition and O’Young was able to continue expanding the gap until crossing the line to take the title. Frank Yu and Richard Lyons’ luck did not improve for the final race of the season, with Frank being hit on turn three of the first lap. This put the #88 Interush on the back foot but they fought hard to take P9 by flag fall.

Lloyd started the race from P2 knowing that the championship rested on getting ahead of the Bentley that sat on pole position. As the lights went out, Lloyd expertly placed the Aston Martin and timed his start perfectly before passing the Bentley with a superb maneuver into the first corner. The young Brit had executed the crucial championship move and set about widening the gap between their title rivals as quickly as possible. Using the clear air ahead to his advantage, Lloyd was able to dive into the pits and change over to his teammate with a healthy gap. O’Young hit the track knowing that the title rested on his ability to stay ahead and keep the Bentley at bay.

It feels strange taking this championship for myself because it was a partnership with Jonathan Venter and Daniel Lloyd.

Immediately his pace was impressive and began to pull away, adding to the gap that his teammate had created. O’Young drove on the limit for his entire stint, elevating his pace to another level and expanding his lead to over 11 seconds. As the flag fell for the final time this season, O’Young crossed the line eight seconds ahead and became the first Hong Kong driver to win the GT Asia Series drivers’ championship. O’Young’s title would never have been possible without the talented help from young Australian Jonathan Venter and Englishman, Daniel Lloyd, who are both members of the elite Aston Martin Evolution Academy.

Frank Yu started the final race of the season from P7 and with the pace that the #88 Interush Aston Martin had shown all weekend, it was looking like they could finish the season on a high. Unfortunately, as has been the case with their challenge this year, luck was not on their side. Frank was hit from the rear in turn three on the first lap, by the Ferrari of Todd Piti, spinning him around and sending him to the back of the grid. Frank recovered quickly and began his chase, making his way back up to P10 with an excellent display of overtaking skill before changing to his teammate.

Lyons started his stint in P12 and immediately began his attack, wearing away the gap with the consistent pace he has shown all season. He took two positions with ease before making a millimeter perfect move, going side by side up the pit straight and into turn one to claim P9. Lyons did the best he could but couldn’t beat the clock, running out of time before he could fight to the top. He was able to bring the #88 Interush car home in P9 to finish the season in the points.

Frank Yu, Driver #88: "What can I say, I was hit from behind once again and it put us at the back. I fought back to P10 and handed over to Richard who did a great job to get us into P9 and finish with some points."

Richard Lyons, Driver #88: "This wasn't the way we wanted to finish our season here in Thailand. It has become all to familiar for us to be hit and then have to fight our way through the field."

Darryl O’Young, Driver #99: "It feels strange taking this championship for myself because it was a partnership with Jonathan Venter and Daniel Lloyd. They deserve it just as much as I do, so they are both champions. I am really happy with Craft-Bamboo Racing; everybody has done a phenomenal job, especially at crunch time. Even after the incident in qualifying, no one even had a negative thought and was just straight on it and that was the difference in this championship. If we never got that car out in qualifying we never would have won. It is such a team effort and so much went into this championship. I’d like to thank VLT, we are a Hong Kong team, with Hong Kong sponsors, so it is a really proud moment for Hong Kong.”

Daniel Lloyd, Driver #99: “Today has been awesome, I am really grateful for the opportunity Craft-Bamboo Racing has given me. I am really pleased to work together with Darryl to help them towards the championship. We have had a tough weekend and we were the underdogs, I had a great start and Darryl had a great stint so Im over the moon that it all came together.”

Richard Coleman, CEO of Craft-Bamboo Racing: "Absolutely blown away by the team and the effort that has gone in to winning the race and therefore the championship, so it is unbelievably special. The drivers did an incredible job to build the gap and the team has been fantastic all year. I'm just really overwhelmed."

Craft-Bamboo Racing tied for championship after incredible comeback in Thailand