Craft-Bamboo Racing fired up for Fuji 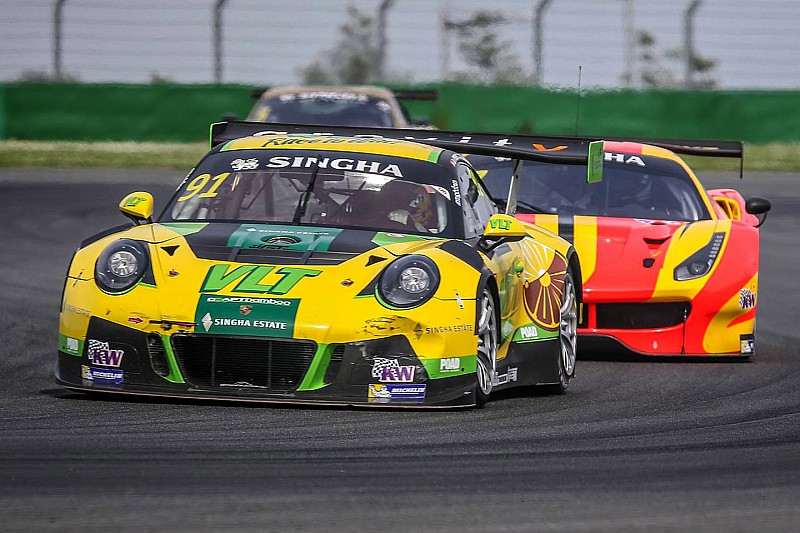 The Craft-Bamboo team is well prepared for the second Japanese event of the season.

Craft-Bamboo Racing is fired up to take on the Fuji Speedway in Japan for rounds seven and eight of the GT Asia Series season. After showing good signs of development in Okayama, the Craft-Bamboo team is well prepared for the second Japanese event of the season and is intent on challenging for some top results this weekend. The 2015 GT Asia champions have an excellent track record at Fuji and will be using it to their advantage in the hopes of gaining an edge over the competition.

Richard Lyons and Frank Yu not only have a great deal of experience at Fuji but also have a strong record of success at the famous speedway. Lyons has been a regular there since 2001, competing in both the Super GT and Formula Nippon, where he has taken a great number of wins and podiums in the process. Lyons knows every inch of the Fuji Speedway and will be utilizing his knowledge to give the #88 Interush Porsche a clear advantage over the rest of the GT Asia Series grid.

Frank has been racing at Fuji for five years and took a podium in 2014 with Craft-Bamboo Racing. Paired together, Frank and Richard are likely to be the most experienced pair of drivers at Fuji and they are aiming to grace the podium in both races. Backed by Craft-Bamboo Racing’s extensive experience at the circuit, the Interush pair has everything they need to challenge for glory in Fuji and put the #88 Porsche back on top.

Darryl O’Young is no stranger to the famed circuit either, taking a second place podium in race two last year. With his experience at Fuji and the form that he showed during qualifying in Okayama, the Hong Kong driver is focused on upping his performance once again this weekend. O’Young will also be mentoring his young teammate, Naiyanobh Bhirombhakdi, in an effort to get him acquainted with the new circuit.

Bhirombhakdi put in his best performance of the season so far at Okayama, with a great start and some bold overtaking manoeuvres. The #91 driver is keen to continue learning as much as possible from the Porsche, while pushing himself to improve his pace in qualifying and both races. Given the continual improvement Bhirombhakdi has shown with each passing round, the #91 VLT Porsche should be in for a strong showing at Fuji.

“Really happy to be racing at the Fuji Speedway once again as I know the track very well. It is a really fast circuit and with how the car felt in race two of Okayama, I am really confident that Richard and I can achieve some really good results."

“Fuji is a place I've won at many times before but this year it may be a little more difficult. The last few races have seen us struggle for performance but there are many positives we've been able to draw from each race. I feel Craft-Bamboo Racing have now got a handle on some settings and hopefully we can put it together at Fuji to get our first podium of the year."

“Really looking forward to Fuji, we are steadily making progress each weekend and I feel quite confident that Fuji looks quite suitable for the Porsche. It is always hard to say heading into the weekend, and there are chances of rain so it is hard to say how that will play into it. Definitely going into the weekend positive and that is the most important thing right now, having a positive attitude and being prepared for everything that lies ahead.”

"Even though I am very excited to be racing in Japan again, especially at the famous Fuji International Speedway for the very first time, I am more focused on learning more about the GT3 R, and improving our qualifying, and race pace. At the previous round in Okayama, both cars showed promise and I hope we can continue moving in the right direction this weekend"

“It has been a challenging first half of the season for us but we continue to do everything possible to improve our pace and refine the development of the #88 and #91 Porsches. Fuji has been a good circuit for us in the past and our drivers know the circuit well, so we will be fighting to get most out of this weekend and score some good results.”