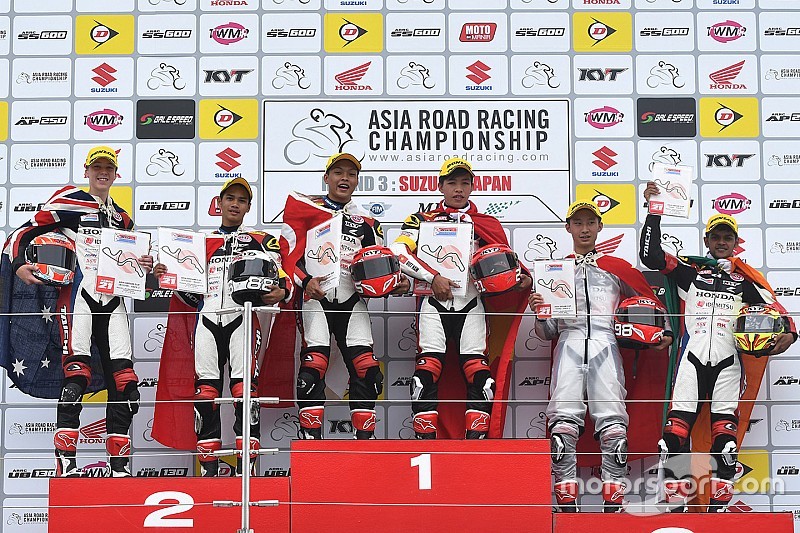 Hari Krishnan scored his second podium of the Honda Asia Dream Cup season in the third round of Asia Road Racing Championship at Suzuka.

The Indian qualified a lowly 16th place on Saturday with a time of 2m45.547s , while fellow countryman Sethu Rajiv lined up ahead in 13th place.

The two-hour endurance race, however, was a different story with Krishnan and teammate Zhou Sheng Juh making strides to take a ADC class podium, finishing eighth in the overall results.

Rajiv (teammate Corey Briffa), meanwhile, had a jump start and eventually retired with 19 laps to go in the race under damp conditions.

Up ahead, Seji Maeda and Yoshiharu Okada took the overall victory ahead of Akito Narita and Seiya Matsumoto while Azhar Mohd Noor and Bui Duy Thong took ADC win from Broc Pearson and Md Febriansyah.

Heading into the fourth round, Krishnan sits eighth in the championship with 43 points, while Rajiv is 14th with 20 points on board.

In Race 1, Kumar moved up the order to finish ninth, 20 seconds down on race winner Eane Jaye S. Sobretodo, with Mario U.Bordon Jr and Maxi Hattori completing the podium.

Subramaniam, in contrast, endured a difficult race, ending a lowly 12th out of 14 classified finishers.

In a thrilling Race 2, Kumar made the most of the battles to jump from ninth to first in the last three laps, but the close tussle for win saw him drop to fifth at the final chicane on the last lap.

At the front, Muhammad Sapril took the chequered flag, with countrymen Rizal Feriyadi and Japan’s Shinnosuke Sato following closely behind in second and third positions respectively.

Thus, Subramaniam is 14th in the standings with 18 points, with Kumar classified 15th despite missing the first four races in Johor and Buriram.

Sarath Kumar made his debut in the Supersports 600cc class after being forced to sit out of the previous round due to an aggravating injury.

In qualifying, S Kumar was well off the pace of the frontrunners, finishing 25th with a time of 2m21.497s.

The opening race was red-flagged with 11 laps to go after Anucha Nakcharoensri’s bike caught fire at the start/finish straight.

The remainder of the race was reduced to five laps, with results calculated based on total time for part one and two.

Sarath was classified 23rd, with Yamaha’s Decha Kraisart winning the race by just 0.328s from Yuki Takahashi as Tomoyoshi Koyama completed the podium.

The former Moto3 rider failed to start the final race - won by Takahashi -, bringing the weekend to a sober end.