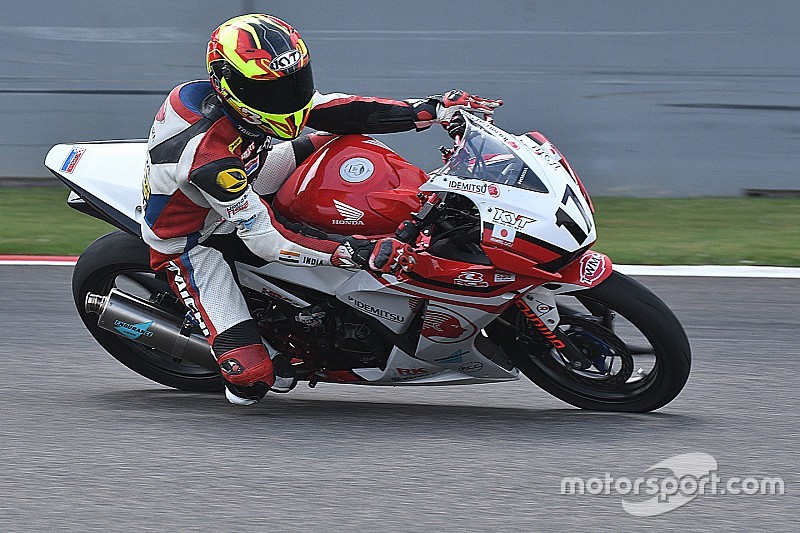 Hari Krishnan and Rajiv Sethu claimed a top 10 finish in the first Asia Dream Cup race at the Buddh International Circuit, while Mathana Kumar was classified 12th on his debut.

Krishnan, who arrived at his home race after back-to-back podium finishes in the Indian National championship, got a great start to jump from 10th to 7th on the opening lap.

The Indian then continued his charge thereafter, running as high as fifth, eventually settling for sixth place after a feisty fight with a number of riders.

At the front, Hiroki Nakamura was unchallenged en route to a comfortable 4.430s victory over Muhd Febriansyah and Koko Masahura.

Yamaha Thailand Racing’s Anthony Keith West won the flagship Supersport 600cc race, which was red-flagged after Patis Chooprathet crashed on the start/finish straight at the conclusion of the first lap.

Once the shortened race resumed, West led polesitter Decha Kraisart, who slowly drifted away after getting embroiled in a battle with Amhad Yudhistira.

The two traded positions for multiple laps before the Kraisart managed to pull away from the Indonesian to take second.

Yuki Takahashi was classified fourth in the lead Honda bike, with Azlan Shah Kamaruzaman completing the top five, with Tomoyoshi Koyama taking the lead of the championship.

The lone Indian rider in the class, Sarath Kumar, was sidelined from the race after sustaining a collarbone injury during FP3 yesterday.

The 24-year-old, who is recovering from a pre-season knee injury, made a trip to the hospital following the crash, and was forced to make the decision to skip his home round.

With as many as nine riders part of the leading group, the lead changed hands almost every lap in a nine-lap race.

However, on the final tour, Wongathanon and Sarmoon built a cushion on the rest of the field, setting up a two-way showdown for victory.

In the end, it was Wongathanon who took the victory, having passed Sarmoon in the second sector.

Behind the two Thai riders, Takehiro Yamamoto clinched the final spot on the podium.