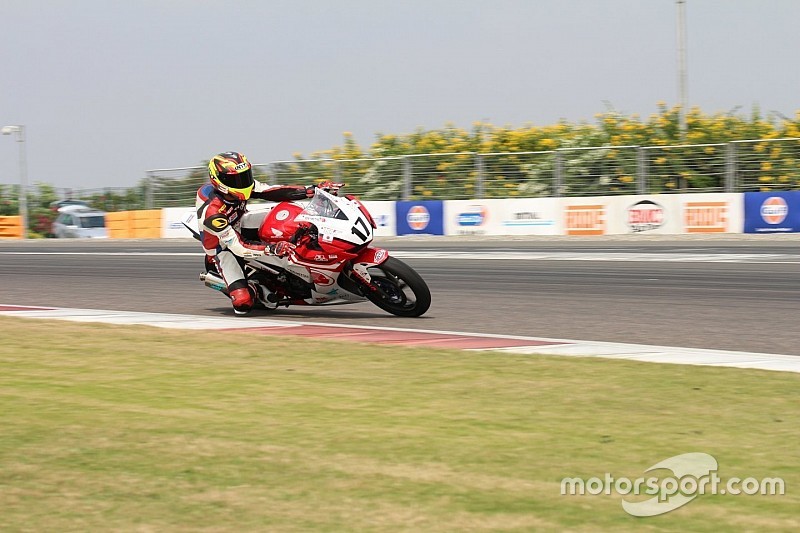 Hari Krishnan and Mathana Kumar finished in the top 15 in the final Asia Dream Cup race at the Buddh International Circuit, while Rajiv Sethu retired after falling off the bike.

Krishnan started the second race from 10th place and would have aimed to replicate Race 1’s result, given his recent form in the series.

However, the Indian lost places in the early laps, dropping to 13th. He later recovered enough to finish on the cusp of the top 10 in 11th after battling hard with rivals.

Kumar, meanwhile, dropped to 16th place on the second lap, before making some gains to finish 15th on his debut wildcard weekend to score a point.

Sethu, the third Indian rider in the fray, fell from his bike on the very first lap of the race. While he managed to get going, the damage to his bike forced him to dive into the pits and retire from the race.

At the front, Broc Pearson reclaimed lead on the very last corner to take the chequered flag from Sittipon Srimoontree and Hafizh Nor Azman - the three separated by mere 0.913s.

With just one round remaining, Hiroki Nakamura comfortably leads the standings with 183 points, while the Indian contingent is lead by Krishnan on 11th with 63 points, Sethu 16th with 26 and Kumar slotting in at 19th with four.

Kraisart passed West to take the lead at the start, only for the Australian to reclaim his original position going into Turn 4.

The two riders continued to trade positions before West stamped his authority on lap 4, making a brilliant passing maneouvre at the end of the back straight.

Thereafter, West pulled away from the Yamaha Thailand Racing rider, claiming his second win of the weekend by a margin of 3.199s.

Koyama has seven points advantage after Round 5 with 150 points, while India's Sarath Kumar having to miss the races after fall stays at 27th with lone point.

In the Asia Production Cup 250cc category, Apiwat Wongthanan passed Galang Hendra Pratama on the final lap to take victory and the title.

For three-quarters of the race, Wongathanan was indulged in a battle with Anupab Sarmoon, only for the latter to make a mistake and drop down the order.

This brought Hendra Pratar into play, who held on to the lead until Wongathanan passed him on the very last tour.

The Yamaha rider also lost a place to Sitthisak Onchawiang on the final corner and had to settle for third place.