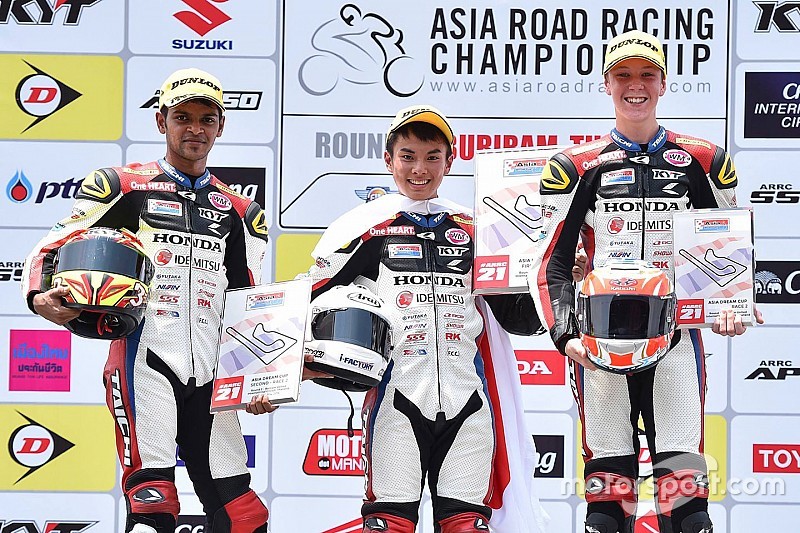 Hari Krishnan lodged his maiden podium finish in Asia Road Racing Championship, as he battled his way through to take second place in race two, at Buriram.

In a closely-fought eighth-lap Asia Dream Cup race, Krishnan made his way up the order and soon joined the leading pack.

Right at the final corner, Krishnan made a last gasp attempt on Broc Pearson, diving down the inside of the Australian to move up to second place.

Pearson tried to fight back with a sprint up to finish line but simply ran out of road, slotting in two hundredths of a second behind the Indian.

Japan’s Hiroki Nakamura took advantage of the Indo-Australian spat to steer clear and record his third victory of the season.

Meanwhile, the other Indian rider on the grid, Sethu Rajiv, had an incident-free race to finish at ninth position.

Following the conclusion of the second round of the championship, Krishnan moves up to seventh in the standings with 32 points while Rajiv occupies the 15th spot.

Kanan Subramaniam endured another DNF in Suzuki Asia Challenge, with the Indian retiring on the second lap of the race.

Muhd Rozaliman Zakaria won the race from Muhammad Sapril and Jefri Tosema as Zakaria leads the standings with 76 points.

With just one race finish in four races, Subramaniam sits a lowly 15th in the championship out of 17 riders, with 11 points in his tally - all from yesterday’s rather impressive fifth place result in race one.