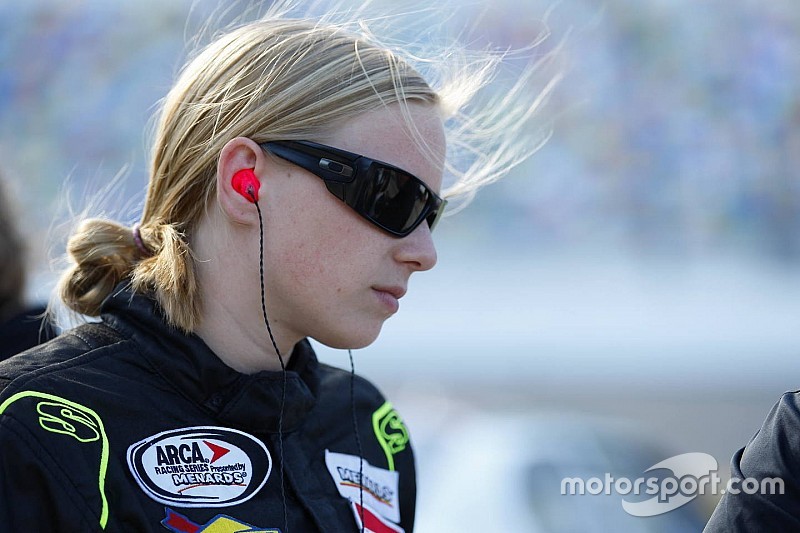 Sarah Cornett-Ching has not felt normal since hitting the wall on the backstretch in an ARCA race at Kentucky Speedway on Sept. 23.

The “wicked” headache she endured was followed by dizziness, a sensitivity to light and ringing in her ears.

Initially, the 25-year-old Brittish Columbia native felt void of emotion, almost zombie-like--so much so that it scared her parents.

“I was pretty out of it, I guess,” Cornett-Ching told motorsport.com. “But I’m feeling a lot more like myself lately.”

Cornett-Ching was diagnosed with a major concussion but remains encouraged. The honesty Dale Earnhardt Jr., has exhibited throughout his rehabilitation from a head injury in July provided the aspiring driver with the necessary courage to face her own situation.

Although Cornett-Ching has not been in touch with Earnhardt, she acknowledged, “That would be cool if he had the time to reach out. I think the number one thing I’d want to know is if he wants to put my (Kentucky) car to his graveyard (laughs).”

Last Tuesday, NASCAR contacted the driver and arranged for her to meet with Dr. Jerry Petty of Carolina Neurosurgery & Spine Associates. That’s where she ran into Cam Newton.

“It was sort of an impromptu thing,” Cornett-Ching said of her chance meeting with Newton. “He was just walking by so we didn’t talk too much. I just told him that I had a concussion from hitting the wall.

“He told me, ‘Hang in there.’ He was really sweet. I’ve never met him before. But I thought it was really sweet for him to take the time to stop and meet me and take a picture.”

The Carolina Panthers quarterback sustained a concussion in last Sunday’s game against the Atlanta Falcons. Newton was sidelined from practice on Wednesday.

Cornett-Ching can relate. She has not been cleared for the ARCA season finale at Kansas Speedway on Oct.14. After her injury, she found it difficult to be around people, a symptom she shares with Earnhardt. She simply didn’t feel like herself.

Even though she feels better now than even one week ago, sometimes it’s difficult to walk in a straight line and the headaches persist. Each day feels like it’s her first. She describes her road back as starting over. Small tasks — things the average person takes for granted — Cornett-Ching struggles to accomplish. And that frustrates her.

“Right now, I really get bad headaches, dizzy,” Cornett-Ching said. “The sun hurts my eyes. My balance is off. I don’t walk with a nice stride. I kind of shuffle a little bit because my balance sucks. I can’t even imagine being competitive in a race car having those things going on right now.

“Hopefully, I’m really optimistic, probably, but I hope to be back in a stock car before the end of the month. I hope,” she said. “There’s really no hope for Kansas. It would really be too early for me.”

This season, running a partial schedule, Cornett-Ching averaged a 12.5-place finish in her first seven races of the ARCA season. She was looking forward to returning to Kansas where she came from qualifying 27th in 2015 and finished 13th.

Getting back behind the wheel

Currently, there is no timeline for her return to competition.

“It’s hard to say when I’m going to get into a car, but the minute that I have a few days with no symptoms, the doctor has told me just to push myself. I find that when my heart rate goes up, things get worse. I feel sick again. Also, with exercising, when I feel pretty good, go for a walk, go for a jog, try to, like make the systems come back again and when I feel sick, I just stop.

“It puts you back to the start. I don’t know what Dale Jr. has or is going, through but if any of the symptoms are similar to what I’m experiencing, it’s really demeaning. It feels horrible.”