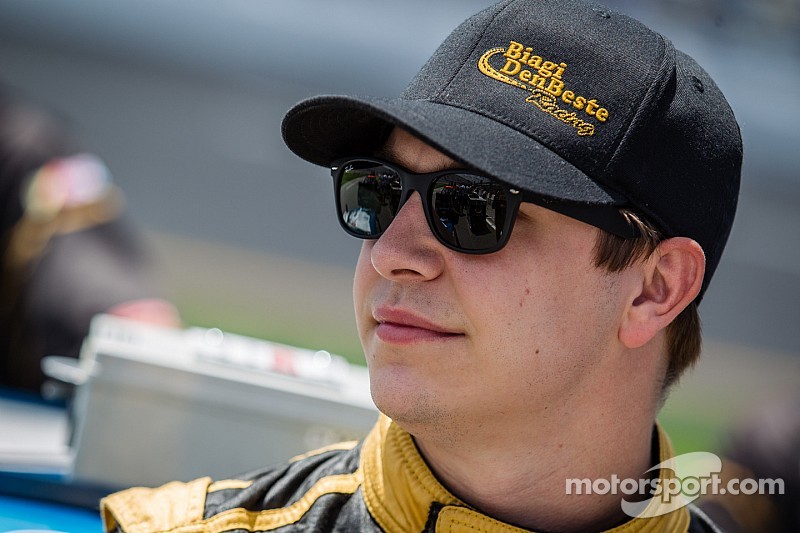 As of 5 p.m. Tuesday, Kevin Swindell wasn't sure what he was doing this weekend, but he didn't plan on racing.

That changed when Venturini Motorsports' Billy Venturini called and offered him a chance to drive the No. 15 Zaxby's Toyota on the one-mile dirt track in Springfield, Illinois. Swindell accepted the offer early Wednesday morning and took the team to victory lane Sunday afternoon.

"This is awesome," Swindell said. "They gave me a great car and did a lot of work on it. I'm so thankful for the chance to take this car to victory lane."

It wasn't easy - and Swindell's beat-up race car after the race was proof. He hit a wall during practice, and had a few hits on the track during the race. But, the Venturini team fixed it at every chance.

"They kept beating and banging on the car during the pit stops and the car was good," Swindell said. "Luckily, the hits weren't too hard and didn't do a lot of damage. It didn't really affect the car."

Leads for good on lap 89

Swindell led 21 laps, taking the lead for good on lap 89 of the 100-mile, 100-lap Central Illinois SuperChevyStores.com 100. He held off ARCA Racing Series point leader Mason Mitchell, who got stronger at the end of the race, zipping from seventh to second over the final dozen laps. In doing so, he maintained his series point lead over Grant Enfinger, who led the most laps and finished third.

"I knew we were going to be there at the end," Mitchell said.  "I was digging real hard, trying to get everything I could get. We had a little something there at the end, but not enough for the 15."

Enfinger was running his first dirt track race since 2011 and was pleased with his finish. He led 33 laps, compared to 31 for Mitchell.

"I knew Pickle (crew chief Ryan London) would give me a good car," Enfinger said. "In practice I didn't offer him much feedback, I just was content to let him set up the car. I'll take third place for sure. This GMS Racing Team just keeps working hard every race. I'm excited now, going to DuQuoin in a couple weeks."

The race took 1 hour and 17 minutes to complete and was delayed by nearly an hour as crews from the fairgrounds and Track Enterprises - the race promoter - worked on prepping the track after heavy rains hit the Springfield area Saturday.

When qualifying was rained out, it forced the fastest car in practice - the No. 16 of Kelly Kovski - to start 27th. Within four laps the Springfield, Ill. native was in the top 10 and he took the lead momentarily in fact.

"I'm comfortable driving like that, driving on a dirt track," Kovski said. "I knew I had to go early to make up all of the track position that was lost from not qualifying. I got caught up in one of those restarts and lost several spots. I didn't come here to finish second or sixth, though, I came to win, so that's a little disappointing."

Shane Cockrum was another of the fast cars that started near the back. He came from 29th to ninth.

"That was a lot of fun out there," said Cockrum, who lives in nearby Benton, Ill. "I got banged up a little bit. I think I was a sandwich for several cars out there. But, I'll get my body guy working on the car and we'll be ready for DuQuoin."

The No. 44 Ansell-Menards Toyota of Frank Kimmel finished fourth with his nephew Will Kimmel fifth in the No. 69 Messina's Ford. Kovski was sixth in the Billingsley Towing-Fire & Ale-Schluckbier Chevrolet, Justin Boston seventh in the ZLOOP Toyota, Kenny Schrader eighth in the Federated Auto Parts Chevrolet and SCOTT Rookie Austin Wayne Self in the AM Technical Solutions Dodge was 10th and the highest finishing rookie of the race.

James Swanson finished a career best-14th in the No. 0 Wayne Peterson Racing Dodge, despite pitting only once for fuel only. He led four laps, the first four laps he's led of his career.

"Pit strategy worked out for us for once," Swanson said. "Plus, Hoosier gave us a great racing tire - good enough that we could go all 100 laps on it. It was a good race."

The race had six cautions for 32 laps.

The ARCA Racing Series goes next to Madison (Wisc.) International Speedway for the Herr's Live Life With Flavor 200. The race will be live on CBS Sports Network at 2 p.m. CT, Sunday, August 24.