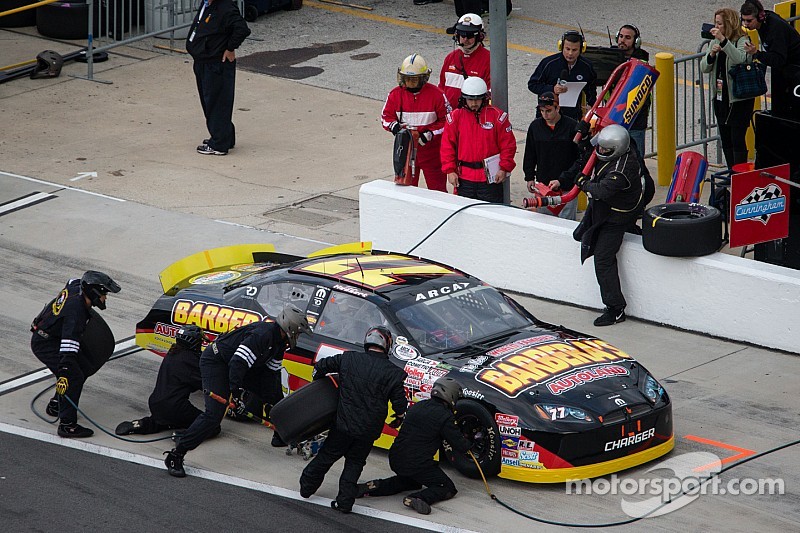 Tom Hessert won for the fifth time in his career Saturday and third time at Salem Speedway, but it's safe to say he has never won like this before.

Hessert (in photo from a previous race) grabbed the lead from Mason Mitchell with 12 laps to go, then held on and beat Mitchell despite both cars bouncing off each other and the wall coming out of the final turn of the 200-lap event.

"I was bouncing off the fence and the wall, but I just kept the throttle down," Hessert said. "Crazy, crazy finish. I was just thinking 'don't hit that pit gate, that might hurt.'"

Austin Wayne Self finished third, the only other car on the lead lap, with Grant Enfinger fourth and polesitter Kenny Schrader fifth in the Federated Car Care Fall Classic presented by JayC Food Stores.

Hessert's No. 77 Barbera's Autoland Dodge scrapped the wall but beat Mitchell to the finish line after the No. 98 TTS-Musselman's-Wildlife Foundation of Florida Ford spun and crossed the finish line backwards, nearly five seconds after Hessert took the checkered flag. The two drivers laughed and hugged after the race.

"I was really good in turns three and four and he was really fast in turns one and two," Hessert said of the finish. "I got a lead on him, but he was right on my bumper. We were side-by-side. We both drove it into four and we just were beating and banging."

Mitchell, who now leads Enfinger by 45 points heading to Kentucky, said he just drove the car in hard and gave it his best shot.

"I was doing everything I could," he said. "I knew what happened to me at Winchester and I didn't want to do that to anyone. I respect these guys too much. I just didn't want to hit that wall after I spun. I'm happy to leave here with a bigger points lead. I had to think big picture, too."

Mitchell finished second for the sixth time of the season.

The race went caution free for more than 100 laps, putting numerous cars on a variety of pit strategies. Hessert was one of the final cars not to pit when the first caution came out.

"Kevin (crew chief, Kevin Caldwell) kept telling me to stay out, stay out," Hessert said. "We needed tires so bad, but it worked out for us."

Once the caution did come out, Hessert was able to stay near the front, although Mitchell would regain the lead. Mitchell led 127 laps. Hessert (28), Schrader (44) and Kyle Benjamin (1) also led laps. Officially, Hessert, from Cherry Hill, N.J., led the final 12 laps.

Hessert's Cunningham Motorsports teammate Self was third and watched the two cars in front of him battling for the win.

"I had a great vantage point from where I was," he said. "What a great day for Cunningham Motorsports. I knew that something was going to happen ... you knew that two guys racing that hard that something would happen. I was just there, waiting."

Enfinger said his car was just a little off in the beginning and once it was better, the No. 98 Allegiant Travel Chevrolet regained some of the laps he lost early on. Eventually he was able to get to within one lap down before the race ended.

"This was one of those races where we needed a caution," he said. "That hasn't happened to our GMS Racing team much, because there have been races where we didn't want a caution. Today, we did."

"GMS has great cars for both Kentucky and Kansas," he said. "We'll go there and see what happens."

Brennan Poole finished sixth in the Zaxby's Toyota while defending race winner Kyle Benjamin was seventh. Bill Catania was eighth - his first top 10 finish in ARCA in the No. 18 State Line Speedway/ Stacks Original Wings & BBQ Sauce Chevrolet. Indiana native J.J. Haley, in the No. 55 BraunAbility-Braun Auto Group Toyota, was ninth and Blake Hillard, from nearby Owensboro, Ky. was 10th in the Blake Hillard Racing Chevrolet.

Will Kimmel had hoped to start the race in the No. 69 Kimmel Racing Ford, but due to the length of the NASCAR Nationwide race at Chicagoland Speedway that he raced in earlier in the day Saturday, he did not make it to Salem Speedway until well after the race had begun.

The race had only one caution for 8 laps and took just 1 hour and nine minutes to complete.

One of the wild cards to the race was the new pavement in turns three and four. Hessert - who won the fall race at Salem in 2012 and spring race in 2013 - said once the race settled in, the pavement had little effect.

"It's still the same old Salem," he said. "The grooves might be a little bit different, but it's still Salem."

The ARCA Racing Series will have an open test Tuesday at Kentucky Speedway, then race at the track in the ZLOOP 150 on Friday, Sept. 19. The race will be live on Fox Sports 1 beginning at 8 p.m. ET. The season finale will be on Fox Sports 2 from Kansas Speedway in the ARCA 98.9 on Friday, Oct. 3.

ARCA again starts its season at Daytona on February 14, 2015