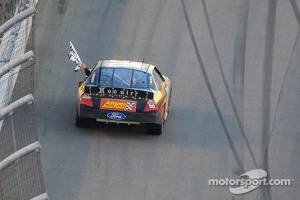 Enfinger, from Fairhope, Ala., took the lead from polesitter Dylan Kwasniewski on lap 52 and stayed there.

Frank Kimmel finished second in the Ansell-Menards Toyota with Clay Campbell third in the Ken Schrader Racing Federated Auto Parts Chevrolet. Tyler Reddick, 18, finished fifth in his first Daytona start in the Broken Bow-Cunningham Motorsports Dodge, one spot behind teammate Tom Hessert in the CAREGARD-AxiomWarranty.com Dodge. Reddick was the highest-finishing rookie and was named the SCOTT Rookie Challenge rookie of the race.

Enfinger, who won at Mobile and Iowa last year, started second and swapped places with Kwasniewski several times. At one point, he said, he was content with running behind Kwasniewski as he learned more about his own car. Then, he said, he tried a pass.

"I wanted to see what would happen for later in the race," he said. "Then, I drove by him. It kind of surprised me.

"The 4 (Kwasniewski) and 9 (Elliott) were good cars. I knew that anything could happen, but track position was in our favor the whole day."

A crash on lap 13 took several cars out of the race. The yellow flag came out again with 14 laps to go with Enfinger in the lead. The ARCA Racing Series has a new rule this year with its double file restarts, meaning the field came to the green, double-file. Enfinger chose the inside lane with Frank Kimmel behind him and Elliott on the outside.

"I've worked with Frank in the past and never had any issues," Enfinger said. "I had a lot of confidence."

Kimmel said his runner-up finish was a good start as he tries to defend his series championship. He said he didn't think he was going to get by Enfinger when the two were single-file coming down to the white and checkered flag.

"I think it ended the way it probably would end no matter what we did," Kimmel said. "It's great for Win-Tron Racing to start the year with a second-place finish."

Campbell, who is the president of Martinsville Speedway, had his best-ever ARCA finish. He's making two starts this season for Ken Schrader Racing, which will have a car at all 20 races on the series schedule.

"It was a blast," Campbell said. "I think I need a couple of months before I can do this again."

Campbell said he planned to follow Kimmel, whether or not he went to the outside and tried to pass Enfinger or if he stayed behind him.

"Kenny Schrader Racing gave me a great car," he said. "You can do all sorts of things here, but first and foremost you've got to have a great car."

Kwasniewski, planning to run the full season in the NASCAR Nationwide Series, took turns leading the race during the first 50 laps, but lost the draft and several positions. 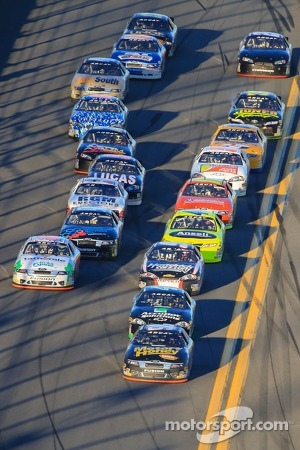 "We were trying to get up there," Kwasniewski said. "We tried. Turner Scott Motorsports gave me a great car, obviously. We kind of got hung out to dry. I learned a ton today."

Elliott, 18, has one career ARCA win. He had a top five car most of the day but dropped back slightly toward the end.

"I thought we had a really good finish to get the win in the last re-start, but we didn't have any help right there," Elliott said.

Enfinger is hoping to run a full season with Team BCR and is hoping a victory at the "World Center of Racing" will help push that cause.

"I am very, very blessed to do what I love to do for a living," he said. "Having a moment like this is pretty incredible. This race means everything. Everybody knows this race. It's just great for me and Team BCR. This is just incredible."

The 51st ARCA race at Daytona had three cautions for 25 laps. Other than Enfinger (42) and Kwasniewski (34), Maryeve Dufault led four laps and was in the top five for the first third of the race in her first appearance in the No. 46 HotTVBrands.com-Tattle Tale Alarms Ford. Gerhart, in the Lucas Oil-MAVTV American Real Chevrolet, started with a provisional after a technical inspection disallowed his qualifying lap. Then, early in the race, his car scrapped the wall. But in the end, however, he was back into the top 10 and battling for a top five position.

Chris Bailey Jr. was the final car on the lead lap, finishing 16th.

The next event on the ARCA Racing Series schedule is March 22 at Mobile International Speedway in Mobile, Ala.

Where are they now? – Ernie Irvan

Ty Gibbs picks up ARCA win No. 8 on the season at Michigan