BUSCH: USAC star Yeley gets the call to NASCAR

Joe Gibbs Racing has signed United States Auto Club (USAC) racer J.J. Yeley to a multi-year contract beginning in 2004. Gibbs, who has won two Winston Cup championships with Bobby Labonte and Tony Stewart since its inception in 1992, has long been ...

Joe Gibbs Racing has signed United States Auto Club (USAC) racer J.J. Yeley to a multi-year contract beginning in 2004. Gibbs, who has won two Winston Cup championships with Bobby Labonte and Tony Stewart since its inception in 1992, has long been thought to have an eye for exceptional young talent. 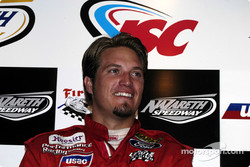 "J.J. Yeley is a very talented racer who everyone at Joe Gibbs Racing is excited to have," said team owner Joe Gibbs. "He has accomplished a lot in a very short period of time in many different racing disciplines. His track record in USAC mirrors Tony Stewart's before he came to NASCAR, and Tony's time spent driving stock cars for JGR has worked out very well for him and for us. We're hoping the same is true with J.J."

Yeley, a 27-year-old Phoenix native, joins the team at Gibbs Racing with an impressive resume. He has bested his competitors, by scoring 24 wins, fourteen of them in Sprint cars owned by Tony Stewart. Four of Yeley's other victories have come in a car co-owned by Stewart with Bob East in the Silver Crown division. He has already earned the 2003 Silver Crown and Sprint titles, and with two events left looks to wrap up the Midget title as well.

"There's still some work for me to do in USAC, but having the opportunity to drive for Joe Gibbs Racing is something any driver would want," said Yeley. "It's a good home, with Tony Stewart and Mike Bliss - guys who came up through the USAC ranks before me - already there. It's a great challenge and there's a lot to learn, but I'm ready for it."

Yeley is a natural in the world of open-wheel racing, he is the son of "Cactus" Jack Yeley, the seven time Arizona Midget and two-time World of Outlaws champion. Yeley began driving at the age of ten, and by 2001 he was crowned USAC Sprint Car champ. He followed up 2001, by earning three USAC Silver Crown wins on his way to the series championship. 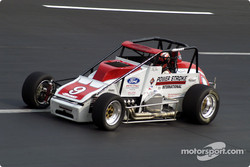 J.J. Yeley.
Photo by Kenneth Plotkin.
While matching some of Stewart's records in the USAC, Yeley has managed to make a mark of his own. Yeley is the first driver in USAC history to win on pavement and dirt in all three national series in a single season.

"J.J. is the number one candidate from the USAC series to move up," said future teammate Tony Stewart, winner of the Triple Crown in 1995. "What he can do on dirt tracks is awesome, and all year he's gotten better and better with what he's been able to do on pavement. It's just a matter of time before he gets the hang of stock cars. He's shown his adaptability since he came to USAC in 1997, and his versatility will be an asset in NASCAR."

Yeley has also been named HARF (Hoosier Auto Racing Fans) Driver of the Year for 2003, and will be honored at their annual banquet on January 25th in Indianapolis.