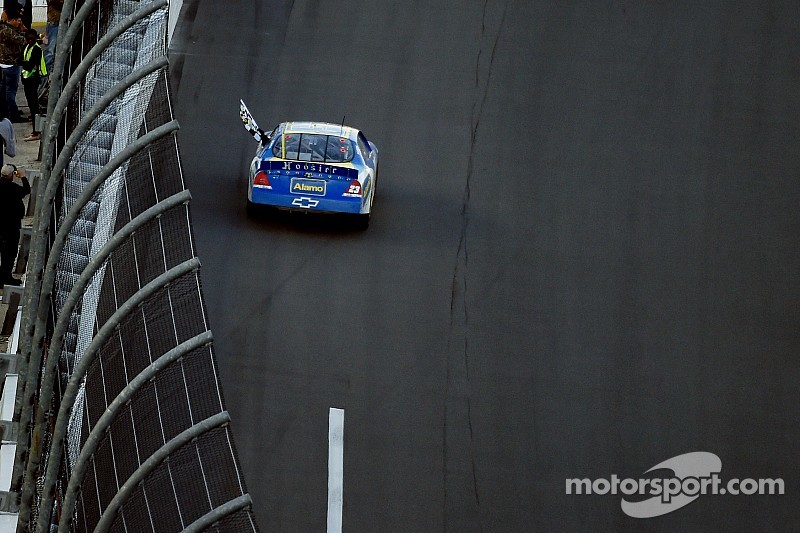 Preparing for Menards 200 on Sunday.

Enfinger, who opened the season with three consecutive wins at Daytona, Mobile and Nashville, is trying to get back on track after crashing in the last two events at Salem and Talladega. Despite the wall bangers in each location, Enfinger has a 100 point lead over SCOTT rookie David Levine heading into the Menards 200 at Toledo.

He's also going to be driving the new ARCA Racing Series composite body car this weekend, a new No. 23 Allegiant Travel Chevrolet SS, and he spent most of Monday testing at Toledo Speedway.

"It's the first time we've run one of the composite bodies, but they've been running strong this year," Enfinger said. "We tore up a car at Salem so this is a good chance to bring this new body out and get a good finish. You can see a lot better out of them, but, overall, the handling characteristics are pretty much the same...hadn't noticed anything big yet, or different."

Like most drivers who race at Toledo, you can put Enfinger in the 'love the track' category.

"I love Toledo. It's a fast half-mile with a lot of grip...that's why it's so fast. I've always liked it here. Had a little bit of shaky luck the last couple years. We've had really fast cars but we always seem to have an issue here...last year it was a tire situation. But, we're going to go really conservative on everything this year to make sure there are no problems. I really like it though. It's a racy short track. You want to be on the bottom for the most part, but if your car's good, you can pass somebody on the outside if you need to. You can definitely go two-wide all the way around.

"We don't have too many chances to test this year, but I feel like this is going to be a really productive one for us. This place doesn't kill tires, so we can test on the same set and take away a lot of great information."

With a Toledo triumph in mind, Enfinger's also got his eye on the bigger prize - the 2015 ARCA Racing Series national championship.

"It's definitely on our mind. It's a little too early to be points racing...we've had two bad races here with Salem and Talladega, so hopefully we can get that over and behind us and get back to our ways. Hopefully, it starts here on Sunday at Toledo. We really need a solid run. I feel like we're already showing some good speed out of this car. I feel like we're on the right track."