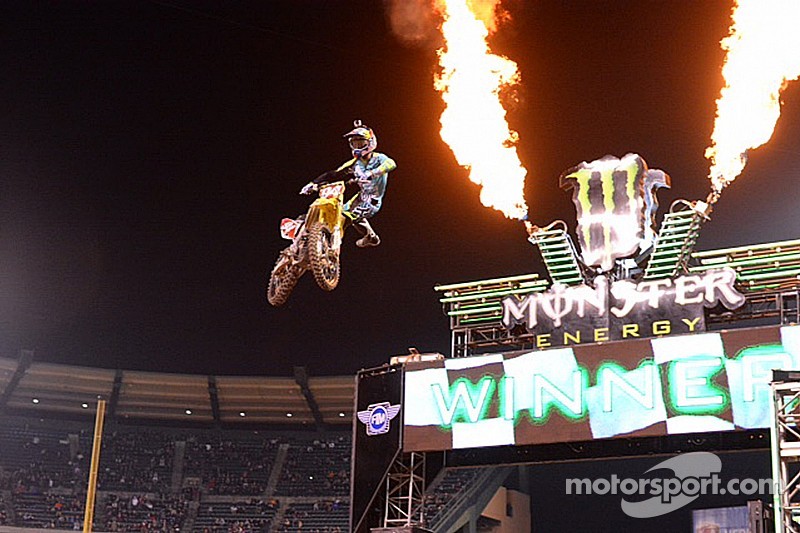 In front of 40,718 Southern California fans, Monster Energy AMA Supercross, an FIM World Championship, made its second of three visits to Angel Stadium on Saturday night on its path to determine #WhosNext. Following a strong start in the 450SX Class Main Event, RCH Soaring Eagle/Jimmy John's Factory Suzuki's Ken Roczen added to his points lead by racing to his second win of the season. In the Western Regional 250SX Class, Yamalube/Star Racing Yamaha's Cooper Webb used a last-lap pass to make it back-to-back wins, taking control of the points lead by doing so.

Albertson gets a great start

Motosport.com/Arma Energy Yamaha's Jimmy Alberston grabbed the SupercrossLive.com Holeshot Award, but was quickly overtaken by BTO Sports KTM's Andrew Short, Monster Energy Kawasaki's Davi Millsaps and Roczen. On a hectic opening lap where the entire field jockeyed for position, Roczen seized the opportunity to take the early lead and sprint away. Roczen first worked his way by Millsaps and then made the pass on Short on Lap 1. From there he opened a multiple-second advantage that would last the entirety of the 20-lap Main Event.

Short goes down as Dungey goes on the hunt

With Roczen out front, several riders put themselves in contention for a podium result. Short crashed out of second, which in turn collected Rockstar Energy Husqvarna Factory Racing's Jason Anderson, which allowed Millsaps to assume second and Discount Tire Racing/TwoTwo Motorsports' Chad Reed to take over third. Red Bull KTM's Ryan Dungey, who was running fourth, then passed Reed for third on Lap 3 and proceeded to surpass Millsaps for second one lap later. That same lap Millsaps fell into the clutches of Reed, who then passed him for third. As these battles took place, GEICO Honda's Eli Tomac, last week's winner, was fighting his way forward from an eighth-place start. Tomac made quick work climbing his way into the top five and then made a pass on Reed for third on Lap 4.

Shortly thereafter, Team Honda's Trey Canard and Reed came together while battling for fourth on Lap 7, when Canard misjudged Reed's line and ran into the back of him. Both riders remounted quickly and Reed retaliated by pushing Canard off the track and forcing him to the ground. Reed was subsequently black flagged and disqualified from competition.

Once the field settled in, Roczen, Dungey and Tomac asserted themselves in top three and pulled away. Dungey slowly gained ground on Roczen and was consistently posting faster lap times, but once the leaders encountered lappers, it slowed Dungey's progress and allowed Roczen to easily take the win and stay undefeated inside Angel Stadium this season.

"That was an awesome race. I fought hard the whole way," said Roczen, who earned his fourth career victory. "It was a tricky tack but I was able to get a good start, get into the lead early and ride my own race. I'm so happy."

"It was a good night and we gave a hard push," said Dungey. "The first lap was chaos with everyone fighting for position, so Kenny [Roczen] got away a bit. I tried to close down the best I could, but lappers got in the way. The track was really difficult and you could only do so much. I'm excited and we'll build from this."

The best of the rest, championship standings

Roczen extended his advantage in the 450SX Class championship standings, and now sits 12 points ahead of Dungey in second. Anderson retained control of third, 21 points behind, with Tomac and Canard rounding out the top five.

Controversial disqualification of Chad Reed has champ riled up - video