The Monster Energy Graves Yamaha ace seemed primed to run off from the start, pulling a quick three-quarter second lead on the opening lap. However, an early red flag was shown due to a malfunctioning starter light, which forced a complete restart.

The Mississippian didn't have things quite as easy the second time around, as Yoshimura Suzuki's Blake Young blasted from eighth on the grid to storm into first by the second turn. The racy Young proved difficult for Hayes to find a quick path by and the field bunched up behind them in the restarted race's opening stages. 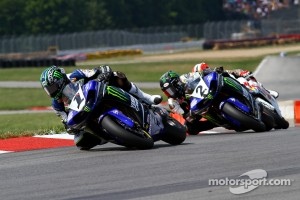 Hayes managed to dive up the inside of Young to take control of the lead on lap three but soon found himself harried by his works Yamaha teammate, Josh Herrin, who followed past Young.

Similar to their race at Barber Motorsports Park, Herrin was able to stay in his wheel tracks and actually reel Hayes in at certain points. The champ broke his young challenger's hopes on lap 9, opening up an additional half-second. Herrin crashed just over a lap later in the Carousel in his bid to stay in the fight.

From that point on Hayes cruised to the checkered flag, notching up his ninth win on the season. The victory was also the 26th of the Yamaha superstar's career, moving Hayes to within two victories of three-time champ Ben Spies for third on the all-time order. 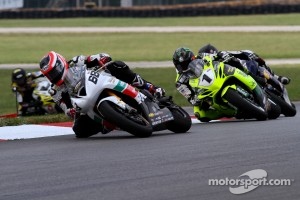 "The first half was a really tough race," Hayes said. "I was running what I thought was a really strong pace. Honestly, it was pretty tough to get around Blake. I gave it a shot a couple of times and was coming up short and overshot it once; he's pretty hard to pass. Once I did I just tried to keep my wits about me and ride smart and put together good, clean laps.

"I thought it would be tough for any of the guys to go out and do those laps. Josh, having me directly in front of him to measure off of, was doing a really good job of hanging in there. But at the pace, I felt pretty confident that one little mistake -- you overshoot a corner here or you overshoot a corner there -- all I needed was to keep the pressure on and the gap would begin to open up."

As a result, Young's close-quarters melee with National Guard Jordan Suzuki's Roger Hayden for third was elevated to a fight for second. The two traded the spot multiple times, but in the end the top-end hit of Young's Yoshimura Suzuki gave him the advantage required to beat Hayden for the position.

Young said, "I can't complain. I ended up getting slotted up into first in the first couple laps. It felt good to be out front but I was pretty hesitant in trying to run clean laps by myself out front. I knew I was making mistakes in just about every turn. I wanted to let the bike roll a little bit more and open it up but I had a tough time finding my mojo or finding my flow so to say.

"We definitely learned a lot today and I think we can apply that to tomorrow. I think it's mostly on my shoulders. I'm the one who is going to have to bring this thing back to the front and start winning races on it again."

"The second start wasn't as good to me as the first one," Hayden said. "I fell back to about fifth and just tried to work my way up. Me and Blake got together and kind of went back and forth the whole race. He was better than me in some spots and I was better than him in some others. I tried to make a pass on him with two laps to go and was going to try to split a little bit in the infield but he got back by me on the back straightaway and I just made a few mistakes that last lap and he got a bit of a gap. But overall it was a good ride for me considering the last few weekends haven't been that good. Hopefully we can get the ball back rolling and keep racing for podiums."

Attack Performance Kawasaki's Steve Rapp was an impressive, albeit lonely fourth, well clear of an intense shootout for fifth behind him.

Jordan Suzuki's Ben Bostrom held the advantage for the majority of the tilt but eventually gave way to both Foremost Insurance Pegram Racing's Larry Pegram (fifth) and Team Amsoil/Hero EBR's Geoff May (sixth) in the end.

The rolling Hayes now boasts a 44-point advantage over second-ranked Young (352-308) and will look to up his season win tally into the double-digit territory he famously sought, and fell short of attaining, in 2011.

Rea makes it a full house with double win in Thailand