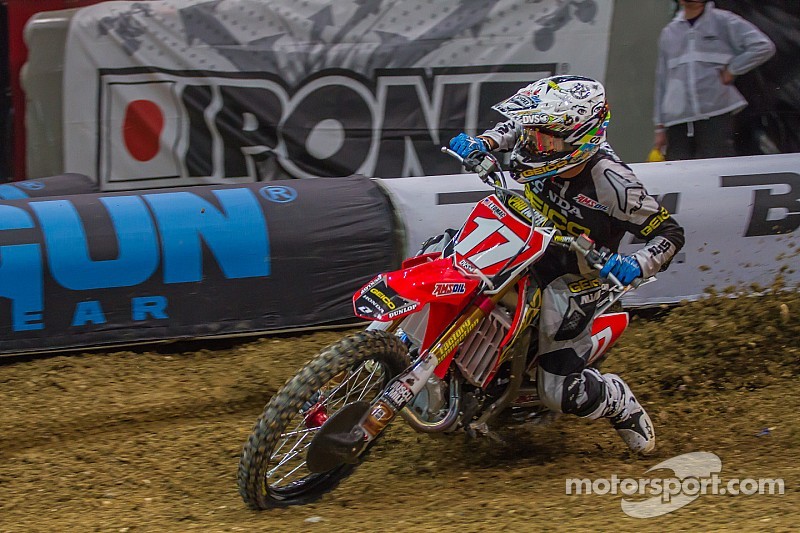 Takes place in Latavia in September.

The American Motorcyclist Association is pleased to announce the U.S. riders who will compete for the American team at the FIM (Fédération Internationale de Motocylisme) Motocross of Nations in Kegums, Latvia, Sept. 27-28. The 2014 team will include Red Bull/KTM's Ryan Dungey, GEICO Honda rider Eli Tomac (in photo) and STAR Racing Yamaha's Jeremy Martin.

AMA Motorcycle Hall of Famer Roger DeCoster will manage the team as it seeks reclaim the world championship that it last captured in 2011. The U.S. team finished second at the 2013 event and third in 2012.

"If you look at the way Ryan, Eli and Jeremy are riding at the moment, we should be back in the hunt for a victory," said DeCoster, who currently manages the Red Bull/KTM AMA Motocross and Supercross teams, and himself competed in numerous FIM Motocross of Nations in the 1960s and '70s. "The track we will be racing at suits our style, and all the riders are talented and on good equipment. Also, all of these riders want to be here, and compete for their country. That's what we want in a team."

Dungey, who will race in the MX1 class, returns for the sixth time to the U.S. Motocross of Nations team. He says he is ready to win back a world championship for America.

"It always feels good to represent the United States," said Dungey, who is currently second in points for the AMA Pro Racing 450MX National Championship. "To be picked to represent your country is a real honor. The last two years we have been short of that top step on the podium, and we all want to be back on that top step, to show the world what America can do. With myself, Eli and Jeremy, we're all riding well and we're all in strong physical condition to get that job done."

Tomac, who has returned from an early season injury to log two moto wins and several top-three moto finishes through the ninth round of the AMA Pro Racing Motocross National Championship, said he is thrilled to be on the 2014 Motocross of Nations team.

"It's an honor to be chosen for the U.S. team at the Motocross of Nations this year," Tomac said, who will compete in the Open class. "Last year's Motocross of Nations was a great experience, being my first time, but leaving with second place left a sour taste in our mouths. It's a new year, a new track and a new country. I believe our team will be more than prepared to battle for the win!"

Martin, who currently leads the points race for the 2014 AMA Pro Racing 250MX National Championship, will be a FIM Motocross of Nations rookie this year.

"It's a really cool feeling, but I don't know what to think because I never thought I would be in this position," said Martin, who will compete in the MX2 class. "The best memory I have of the Motocross of Nations is as a fan when it came to Budds Creek and Ricky Carmichael, Ryan Villopoto and Tim Ferry were on the team and rode real well together as a team. I'm looking forward to riding on a team like that. Ryan [Dungey] and I already train together, and I raced against Eli last year. He's a good guy and has a good family. I just hope to go out there and do the best I can and bring it home for U.S.A."

AMA Director of Supercross and AMA Pro Racing Relations Kevin Crowther said that the 2014 team is prepared for world-championship competition in Latvia.

"The Motocross of Nations is a team effort, not just from the perspective of the riders, but from the perspective of their teams, sponsors and the entire industry," Crowther said. "These riders represent the best of the best in America right now, and with the talented and dedicated support team behind them, which includes AMA Motorcycle Hall of Famer Roger DeCoster and crew such as the Asterisk medical team, we are fully prepared to bring back the FIM Motocross of Nations world championship to the United States."

Competition in the FIM Motocross of Nations includes riders in the MX1 class, which features 450cc bikes; the MX2 class, which includes 250cc motorcycles; or the Open class.

The FIM Motocross of Nations is one of the most high-profile motorsport events in the world. It features national teams competing for a combined score to determine the overall championship-winning country. The event emerged in post-war Europe in 1947 and has run uninterrupted since that time.