Audi is back on top. Marco Werner and Lucas Luhr took a thrilling win in Saturday's Acura Sports Car Challenge of St. Petersburg, battling with Penske Racing's Porsche RS Spyder right down to the wire. Luhr and the No. 7 Porsche of Romain Dumas ...

Audi is back on top. Marco Werner and Lucas Luhr took a thrilling win in Saturday's Acura Sports Car Challenge of St. Petersburg, battling with Penske Racing's Porsche RS Spyder right down to the wire. Luhr and the No. 7 Porsche of Romain Dumas swapped the lead numerous times in the closing laps of the incident-filled, one-hour, 55-minute race. But it was Luhr who used the torque of his diesel-powered Audi R10 TDI to power by Dumas on the final restart to take the win. 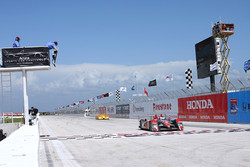 "I was upset because I knew the safety car periods take a while, so I didn't know if we had a chance to go for it again," Luhr said. "When I hit the throttle on the restart, I knew I could get him. Before we were dancing with the inside or the outside and during the race, I had been picking my spots to pass, so I was able to get around."

Luhr rocketed by Dumas on the outside of the front straight with less than three minutes remaining. He held off the Frenchman in the final two-lap shootout around the 14-turn, 1.8-mile temporary street circuit to take the overall win, Audi's first since Laguna Seca last year and second straight at St. Pete.

Werner, who put the car on pole Friday, led the field to the start, which began under caution for two laps because of the stranded Drayson-Barwell Aston Martin. Werner paced the opening 36 laps before handing over to Luhr. Forty minutes in, Jon Field smashed his Intersport Racing Lola into the wall exiting Turn 4, bringing out the second caution and giving Werner the perfect opportunity to pit.

"Everything went well," Werner said of his stint. "It was important to have the lead for a few laps, so I pushed a lot. I came for the first time in traffic and I lost some time. It is normal when you hit traffic in bad situations and bad corners. You lose seconds when you get behind GT2s after Turn 4. Then I got some clear laps and I made my time back."

Dumas beat Luhr out of the pits, giving the No. 7 Penske entry the lead at the restart. The two then swapped positions three more times during the final hour, with Luhr making the race-winning pass. It was his first P1 win, but Luhr also added to his win column as "king of the streets" The German now has seven street circuit class wins, an all-time series record.

"I always like street circuits, even in the GT cars," Luhr said. "I like the atmosphere and the challenge to keep it between the guardrails and no time or chance for errors... It will be the first time I will race in Long Beach, the same as here, so hopefully that will be a good omen." 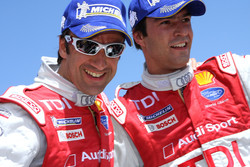 Audi's triumph Saturday also made up for the team's bitter disappointments at the Twelve Hours of Sebring. Mechanical gremlins and on-track accidents cost the German marquee its eighth consecutive overall crown in the season-opener. While the No. 1 machine of Frank Biela and Emanuele Pirro failed to finish due to accident damage, Werner and Luhr redeemed themselves and the team this weekend with the win.

"For sure, Sebring was disappointing so to be successful again here is very good for the team," Werner said. "We were not expecting the car to be this good, so it was great to go out and win a race for Audi."

Despite not picking up the overall win, Dumas and Bernhard still claimed the P2 class victory, their eighth consecutive. When the race came down to a two-lap shootout, Dumas knew that he wouldn't have a chance to match the pace of Luhr's Audi.

"To race only two laps in the end, we had no chance," Dumas said. "We lost the victory overall, but we won in class so it as a good weekend for everybody. I can tell you in the last hour, I was taking a lot of risks trying to keep up, but this is street racing and that's how it goes."

Bernhard started the No. 7 Porsche RS Spyder in second and maintained the position in his stint before handing the car over to Dumas for the final hour. Now in his third season at Penske Racing, the German is still gleaming about driving for The Captain. 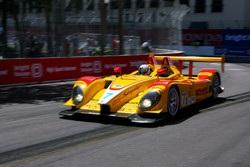 "This is the best team I've driven for," Bernhard said. "Yesterday is the perfect example. We had a car that was missing one piece and one wheel and we still made it to qualifying and were successful. The crew is just perfect. Roger Penske is perfect in strategy and we are glad to drive for him. We will try to keep the success going into Long Beach."

Scott Sharp and David Brabham in the Patron Highcroft Racing Acura ARX-01b finished third overall, second in P2. The highest runner of the Acura contingent ran solidly in the top-five all race.

"We ran near the front of the pack all week, and so, to maintain that great position during the race was just fantastic," Brabham said. "Also, Scott did a top-notch job at the beginning of the race. The car was way too loose at the start, so he was great at keeping it off the wall and gave it to me in good shape."

The No. 6 Penske RS Spyder of Patrick Long and Sascha Maassen recovered to finish fourth overall, third in-class. However, both drivers were involved in incidents on-track, with Long "under review" by officials after the race. The American Porsche factory driver was involved in two skirmishes, including one that sent the Primetime Race Group Dodge Viper hard into the wall, also collecting Terry Borcheller's Bell Motorsports Aston Martin. Borcheller was taken to Bayfront Medical Center for X-rays but was later released.

The second incident came with 15 minutes remaining when Long and Butch Leitzinger collided in Turn 2. As Leitzinger rejoined, he was hit by the second placed GT2 Porsche of Jorg Bergmeister. The impact ripped a wheel off of Leitzinger's Dyson Racing Porsche RS Spyder and damaged Bergmeister's radiator - ending both cars days. Long and Maassen went on to finish fourth overall, third in P2. Chris Dyson and Guy Smith in the sister Dyson RS Spyder rounded out the top-five overall. 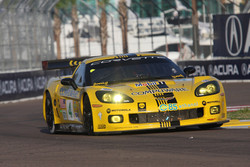 Olivier Beretta and Oliver Gavin drove their No. 4 Corvette Racing C6.R to a flag-to-flag victory in LM GT1, ahead of the sister machine of Jan Magnussen and Johnny O'Connell. After failing to finish at Sebring, the defending class champions put points on the board to start their title defense. The win also marked the first for an E85-fueled car, as the two-car factory team began running the environmentally friendly fuel this weekend.

"We wanted to get back on our winning ways after a failure at Sebring," Gavin said. "It's our first win with the cellulosic E85, and we had great fuel efficiency. There were some questions about the validity of the new fuel, but we made great power and great fuel mileage. The performance is exactly the same. The transition has been seamless from the gasoline to the E85. We are very excited about running it the rest of the season."

For the second race in a row, the LM GT2 win looked to be in the hands of the Risi Competizione Ferrari duo of Mika Salo and Jamie Melo. However, the Houston-based team suffered its second consecutive poor result. Salo started from second and quickly got by polesitter Wolf Henzler for the class lead. A faulty cool suit forced him to pit early, putting the red Ferrari out of sequence. This turned out to be a benefit as Melo retook the lead with one hour remaining as the rest of the leaders pitted under yellow. However, Melo then began experiencing electrical gremlins, making frequent and long pit stops. They soldiered home to a 10th place in-class finish.

While one prancing horse fell by the wayside, another shined. Dirk Muller in the lone Tafel Racing Ferrari F430 GT passed the No. 45 Flying Lizard Motorsports Porsche of Jorg Bergmeister for the lead with 25 minutes left. Muller, who shared the wheel with Dominik Farnbacher, cruised to the class win. It was Muller's first series win since 2001 and Farnbacher's first-ever. Muller attributes the victory to his long-lasting tires in the final stint.

"There was a lot of debris, so it was a tough time keeping the Michelins to keep grip, but they did," Muller said. "It gave me the opportunity to make the run on Bergmeister. I had the advantage to overtake him because I had fresh tires. I got a run exiting the last corner, so I got him braking in one." 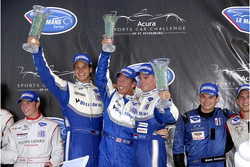 Farnbacher was ecstatic with earning his first series win: "It was a very good race for us," he said. "We didn't have any problems. The only problem we had was the heat in the car but we got used to it. Me and Dirk ran really well, especially Dirk. He had an awesome stint! I am really happy for the whole team, for Bell Micro. I am so happy right now I cannot explain it!"

It was Tafel Racing's first-ever win in the series after 14 starts since debuting in 2007. After switching to Ferraris during the off-season, the Tony Dowe-led effort elected to run only one car this weekend. That strategy proved to work out well. Team owner Jim Tafel, like his father's Kentucky Derby-winning horse "Street Sense", now has a winning thoroughbred.

"We worked hard to get here," Tafel said. "We ran one car here in order to help us focus. We had two objectives for this race: to get a win, and to make it out of here in one piece. Someone asked if this compared to the Kentucky Derby. I said, 'I'll tell you in six minutes.' This does rival the excitement of winning there. I can only imagine how my dad feels when he wins. Now I know."

Johannes van Overbeek and Patrick Pilet in the No. 46 Flying Lizard Motorsports entry rebounded form a late-race spin to finish second in- class. Farnbacher Loles made it two Porsches on the GT2 podium with drivers Dirk Werner and Marc Basseng in third.

From the Tampa Bay to the Pacific Coast, the series next heads to the streets of Long Beach for the Tequila Patron American Le Mans Series at Long Beach on April 19.