The Sebring winner joins regulars MacNeil and Bleekemolen in the GTC Porsche.

TAVARES, Fla. (Mar. 6, 2013) - Dion von Moltke will join Cooper MacNeil and Jeroen Bleekemolen in the No. 22 WeatherTech Racing GTC Porsche for the Mobil 1 Twelve Hours of Sebring next week.

Von Moltke (South Africa) has had a great year as the AJR go-to-guy at the endurance races. At last year's Sebring race, the young Florida International University student teamed with Bill Sweedler and Townsend Bell to drive their AJR Porsche to a GTC win. Most recently, von Moltke was a member of the WeatherTech/AJR Audi R8 winning GT team at the Rolex 24 Hour At Daytona.

I could not be more excited.

Dion vM "This year's Sebring 12 hours will be my third event with the WeatherTech car and second of this year. I could not be more excited," von Moltke exclaimed. "As a company they are very focused on making a product with great quality and they bring that mindset to the racing side which matches perfectly with Alex Job Racing. Every time I have driven an Alex Job Racing/WeatherTech car it has been one of the fastest cars in the field and I hope we can continue that trend next week! To win it at Daytona required everyone on the entire team - from the drivers, to the engineer, to the crew guys to put in an excellent effort and it will take the same execution to do well at Sebring."

A two-time winner in two of the premier endurance events at Sebring and Daytona, von Moltke feels at home.

"I am honored to have my name amongst the very few greats that have won, not just one of those races, but both! Alex Job really knows how to put together a very competitive effort and put his drivers on the right path to be able to win races. I really enjoy driving for him and working with everyone on the team. I can't wait to get to work in Sebring!"

Von Moltke likes his teammates at Sebring and rejoins MacNeil, having last run with him at Petit Le Mans last year.

"This will be my second race working with Cooper and the first time I will drive with Jeroen. Jeroen and I have competed against each other quite a bit in Porsche's and he is one of the fastest drivers in the world in those cars. It is much nicer to call him a teammate rather than competitior. Cooper is coming in as the reigning champion which is a title he thoroughly deserves. He is great to work with and really brings our whole team forward. We all get along well, which is extremely important. In endurance racing, you have to be able to trust everyone on the team and I have a lot of trust in my teammates." 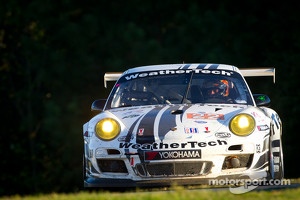 Alex Job has a lot confidence in von Moltke.

"Dion has always stepped in and done a great job for us," Job said. "He is professional, fast and consistent behind the wheel. Over the past three years we have gotten to know each other very well and he fits right in with our team. We have also had a lot of success together, of course at Sebring last year and just two months ago at Daytona, we were able to win the big prize in GT. The only difference from last year to this year is he will be steering the WeatherTech Porsche with a new Rolex Daytona on his wrist."

Competition Motorsports returns to ALMS GTC at 12 hours of Sebring