The No. 68 climbed as high as second during the race, and eventually finished in seventh.

PETALUMA, CA - As the sun began to set on a gorgeous Monterey afternoon and the clock ticked down on the American Le Mans Series race, TRG found itself in the top five with enough fuel to make it until the end. 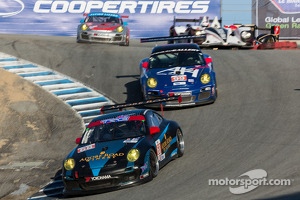 After running in first with just under an hour to go, the pit strategy had worked out flawlessly, and the team was ready, but an issue in the right rear suspension meant Damien Faulkner had to nurse the car to bring home the strong finish.

Ben Keating and Damien Faulkner once again took home a top five finish after delivering stellar performances in the Port Lavaca Auto Group/ViperExchange/Adobe Road Winery No. 66. The team fought hard throughout the weekend to prepare the car and were rewarded with a solid finish.

Keating began the race by moving up quickly and charging toward the front with the solid, consistent lap times he's becoming known for.

Just before the halfway mark, Keating turned it over to Faulkner who, despite a small issue with the right rear suspension, put his head down and stayed out of trouble, doing his best to hold off the competition.

With less than an hour to go, the No. 66 found itself in first place, but nursing the car resulted in a satisfactory fourth position.

Craig Stanton started in the Bellissima/Adobe Road Winery No. 68 and immediately moved toward the front. Stanton was on the move and climbed all the way to second before pitting and handing it over to the new young hot shoe, Andrew Novich.

Novich, a California native, made his ALMS debut this weekend and showed that he has the quickness and maturity to compete at the highest level of GT racing.

After running in the Continental Tire Sports Car Challenge this past season, he showed incredible mental toughness and growth throughout the weekend, consistently getting faster with each session.

The No. 68 climbed as high as second during the race, and eventually finished in seventh, topping off a highly productive weekend at Mazda Raceway Laguna Seca.

Faulkner on driving with Keating and the teams performance: "Credit to Ben who drove out of his skin and didn't put a wheel wrong. He delivers exactly what a pro wants from his co-driver, handing the car over clean and in a higher position than where he started. Secondly, the team was flawless with strategy and pit stops."

Andrew Novich on racing at Laguna and his first time in ALMS: "Racing at Laguna is awesome. There are so many experienced drivers, so I was fighting tooth and nail the whole way. It really doesn't get any better than running at my home track."

Novich on teaming up with Craig Stanton: "Craig did a phenomenal job all weekend. He helped me get acclimated to the car, since he's so knowledgeable and was an invaluable resource."

Ben Keating on the car: "During the race, the car felt better than it had all weekend. We'd really struggled early on in the weekend, but the team did a fantastic job to get it ready for the race. Credit to our pit strategy, which worked out pretty well while other cars made some mistakes."

Craig Stanton on the weekend and teaming up with Andrew: "The car felt great. We found something that works with the setup. Andrew and I have different styles and we found a combination that suits both of us well. Hopefully he can learn a lot and take it with him going forward. He is a super promising young driver."

Kevin Buckler on race weekend: "We had some challenges to get both cars where we wanted them by race time, but the crew worked really, really hard with an variety of adjustments and we came incredibly close to pulling off a stunner, which would have been our 3rd victory in a row at Laguna.

My hat's off to Ben and Damien as well as newcomer Andrew Novich and his teammate Craig Stanton. Laguna Seca is not an easy place for one's ALMS debut, but Andrew did a great job all weekend long and kept getting better and better. He has the potential to become a real top level GT driver!"