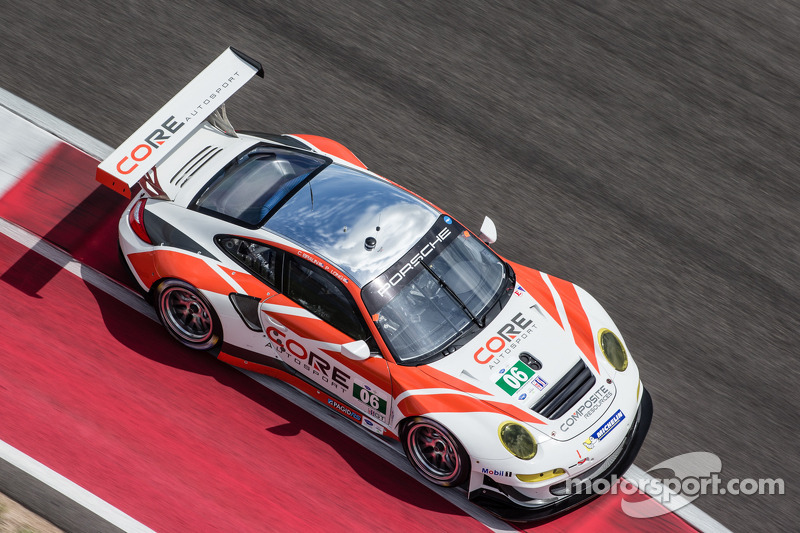 In post-race technical inspection, an engine component was deemed illegal, resulting in a loss of third-place points for the CORE team and its drivers.

AUSTIN, Texas – CORE autosport took to Circuit of the Americas for Round Eight of the American Le Mans Series today moments after an announcement that the Rock Hill, S.C., team would become the competition partner for Porsche’s two-car North American GT factory effort in 2014. Though the No. 06 Porsche 911 GT3 RSR was unable to finish the two hour and 45 minute race, the No. 05 ORECA FLM09 captured a third-place finish in Prototype Challenge. 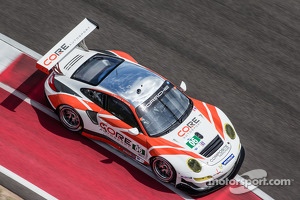 Starting third, Jon Bennett moved the No. 05 PC car into second before contact with the No. 7 driven by Tomy Drissi sent both cars into a spin. Bennett recovered from the spin quickly, losing only one position. He handed the car over to Tom Kimber-Smith in third.

In a bid to put Kimber-Smith ahead of CORE’s nearest championship rival, the team elected to pit for fuel only in the final stop of the race. The strategy worked and leap-frogged Kimber-Smith into second but with the No. 52 driven by Dane Cameron in hot pursuit.

The Englishman put up a strong fight, but the worn tires put Kimber-Smith at a disadvantage as the pair battled through traffic. In the closing minutes, he succumbed to Cameron, settling for a third-place finish. Unfortunately, in post-race technical inspection, an engine component that had passed tech successfully for the previous two ALMS seasons was deemed illegal, resulting in a loss of third-place points for the team and its drivers.

CORE’s GT squad received plenty of attention at COTA. Not only did the team spend the week between Baltimore and Austin rebuilding the No. 06 Porsche 911 GT3 RSR, but it was announced before today’s race that Porsche had selected CORE autosport as its competition partner for a two-car Porsche 911 RSR effort in the 2014 Tudor United SportsCar Championship.

Colin Braun started the No. 06 Porsche 911 GT3 RSR from fourth and charged to second in the opening corner, but faded to eighth in the super competitive GT field. Braun handed the car over to Patrick Long in the team’s first pit stop, who rejoined the race in seventh.

As Long was reeling in the GT competition, the car lost drive unexpectedly on the front straight. With 45 minutes remaining in the race, Long came to a stop near the end of pit out. The team worked quickly to return the car to the paddock and assess the situation in hopes of returning to the race, but a failed Xtrac component in the gearbox forced the team to call it a day for the No. 06.

Round Eight of the American Le Mans Series will air on ESPN2, Sunday, Sept. 22, at 1 p.m. ET. The team will not have far to travel for Round Nine of the championship, which takes place, Sept. 3 – 5 at VIRginia International Raceway, three hours away from the team’s South Carolina shop.

Muscle Milk picks up seventh win in a row at COTA