The Porsche customer team combined current components with a 2010 Porsche RSR chassis they pulled from the race shop so they could finish the season. They out-distanced favored factory entries from Ferrari, Corvette, SRT Viper and BMW to score an exciting seven-tenths of a second win – Porsche’s first GT win of the ALMS season.

Although Porsche is no stranger to the top step of the podium in the 16 years of Petit Le Mans, 13 class wins in the 16-year history of the event including all three GT classes in the inaugural event in 1998 and three wins in LMP2 with the RS Spyder prototype, this was a very special victory. 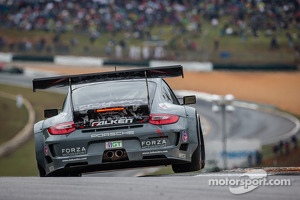 The Team Falken Tire Porsche got better tire wear and fuel economy which resulted in fewer pit stops (12 versus 14 for the second-place BMW). In the end, with Tandy at the wheel, the BMW could close up to a couple of car-lengths, but the Porsche would bolt ahead as he carved his way through traffic and stretched his lead out.

“After our accident in Baltimore, our car was totaled. There was no way to get it ready for Austin, so we took the 2010 show car and decided to bring it back to race prep. So since Austin, we’ve been racing that car, and it still works pretty good!” said Henzler.

“We knew it would be tough, it’s always tough,” continued Tandy. (About Sean Edwards, who died earlier this week in Australia in a coaching accident) “Before the race he was in many of our thoughts. And there were many people who would want to win the race and dedicate the achievement to a friend – and that was something I thought about during the last caution. It turns out, I should have been concentrating more on the driving at hand. It was something we all wanted to do as Porsche drivers, and something for me, as one of Sean’s ‘rivals’ in the last few years to get a win for him.” said Tandy.

“It is clearly difficult winning an ALMS GT race, especially when it’s a 10 hour race. It was all about resiliency. We had a difficult strategy call starting on rain tires but the track was dry. Nobody gave up; the guys were fantastic in the pits. We didn’t have to put any extra time in the pits. The races like this show how strong the team is. It’s pretty special to be here in the last ALMS race and go down in the history books and part of what is considered the best GT racing in the world,” said Sellers, who lives only a few miles from the track.

Long was disappointed in the day the CORE autosport team had, but gratified that their first season in GT went as well as it did.

“If you would have told me at the beginning of the year that we were going take two podiums in this day and age of GT competition coming in mid-season, I would have taken those results any day. We have to be proud of what we accomplished. There were some hard days at the office, this being one of them, but we progressed quicker than I could have imagined and it was great to be a part of it,” he said.

“The mixed bag of wet and dry track was really challenging today. I had some close calls in the night stint. At one point, a prototype came flying back on the track after going off and I got pickup on my tires avoiding it. Then I was right in the middle of the GT battle and I ended up getting into the No. 3 Corvette. I cringe knowing they were going for a championship. It wasn’t intentional. We tried a lot of different tire compounds and combinations, but in the end it wasn’t our day,” said Long.

“It’s a little bittersweet. We had high expectations coming into the season, wanting to win the team and driver championship plus a lot of races. We won a lot of races and won the team championship, but missed the driver championship. But I am just so happy to be a part of this effort. Both of these guys [Madison Snow and Nelson Canache, Jr.] passed pro guys to take the lead and led their stints. That’s how well these guys did and that’s how good the car was today. Flying Lizard has been a class act all season. The guys are just phenomenal. It’s great to finish it up with a win on a high note and a team championship for the guys that work so hard,” said Pumpelly.

“Spencer has been a great mentor to me. Every track this year was a new track to me. It was a great, great race for us. Today, the team did a great job and I am glad Madison came over to join the team. We obviously wanted to get the driver’s championship as well, but this was a great effort. I am looking forward to next year,” he said.

“This is the second ALMS race I’ve ever been in and it’s just amazing to be out there and get used to all the traffic and to pull off a win. I had a great team. I had drivers that helped me improve and get faster and faster. It’s a team effort that helped us get to the top and win,” said the 17 year-old Snow, who had already won the 2013 IMSA GT3 Cup Challenge by Yokohama title earlier in the weekend.

For Dempsey, it was his third podium in a Porsche (second place finish at Mazda Raceway Laguna Seca and third at Circuit of the Americas in Austin).

“It was a little interesting first thing this morning but the guys brought the car back up. We went out on the rain tires and caught us out and we went a lap down right away which was challenging but drove fine after that. We just battled all day long. We didn’t know where we were going to end-up but Andy drove his heart out the last part of that race and really made it possible,” said Dempsey, who also had a fine fourth-place finish in GTE-Am class at Le Mans in June.

But, the Alex Job Racing duo of Jeroen Bleekemolen (Monaco) and Cooper MacNeil (Hinsdale, Ill.), with the help of Sebastiaan Bleekemolen at this event, clinched the GTC drivers title. For MacNeil, it was his second straight ALMS GTC championship, which Jeroen Bleekemolen and Leh Keen helped him win in 2012.

“Two years in a row,” MacNeil said. “It is too bad we couldn’t finish and clinch the championship with a win, but taking the big trophy was the goal. The car was great all day in the changing conditions. Two championships in a row. That was the goal from the beginning of the season. We had some ups and downs this year, but we never forgot the goal of taking the championship. Jeroen did a great job all year and the Alex Job guys gave us a great car.”

“It was a tough day,” Job said. “The race was indicative of the competition in the GTC class all year. We would lead, fall back down and then work our way back-up. The team is a little disappointed that we could not win the final ALMS Petit Le Mans, but we will take the last championship win in the GTC class of the ALMS era.”