Marc Goossens: "It's no secret that the last caution helped. We were very low (on fuel) to say the least."

Marc Goossens – No. 91 SRT Viper GTS-R: "I'd like to say a very big thank you to Ralph Gilles, Beth Paretta, Gary Johnson, Matt Bejnarowicz and of course Bill Riley for building such a great car. It's not only the history of being the first factory-backed victory for Viper since 2000, but we’re only one year old with this program. 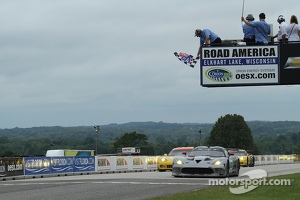 This is the first track that we've gone to for the second time. What else can we hope for? We had a pole position with the No. 93. They were a little unfortunate in the race, but we brought the 91 back in first place - the first victory since the comeback of the Viper GTS-R. I can't say enough about Dominik (Farnbacher) for a great stint at the beginning of the race.

Great work from the team because on that first pit stop, we had to fix the car because of some damage to the rear. The first pit stop took a little longer but after that, it was going flat out. We’re so happy that we are on the top step of the podium.

“It's the first time that we've run so well up front. Obviously, we gambled a little bit on fuel. Talking to the competition, it seemed that they were a little bit more concerned making it to the end (of the race). It's no secret that the last caution helped. We were very low (on fuel) to say the least.

But you know what, we made it to the end. Strategy worked out. All stints were driven perfectly and the guys did a great job on pit lane. Like Dominik (Farnbacher) said, Michelin gives us a great product. The Viper is great. Everything else is gathering data and how we can learn from this one."

Dominik Farnbacher – No. 91 SRT Viper GTS-R: “It’s unbelievable, the first win for the Viper in quite a while. It was a nail biter. I think we made it to the finish line with the last drop of fuel. If you look at all those faces (SRT team), they’re almost crying, everybody’s crying. It’s so emotional for us. I’m just speechless at the moment.

"It was a difficult start. You could hardly see anything because it rained before the race. The start was quite tricky. I tried to stay away from the people around me but at the end, you just ended in a big mess. I got bumped in the front, rear, side and cars were spinning. It was pretty hectic at the beginning. It calmed at a point and we could drive quickly.

The (SRT) Viper was just fantastic in the rain. It was the best car that I have driven in the rain. On the first caution, we went to slicks (tires) and were one of the few teams to try that. It was really good. The Michelin tires worked really well in the rain. They gave me good feedback and confidence. I was very happy."

How was the viper to drive early in the race despite having rear-end damage? "I didn't even know that I had damage. I felt that I had contact everywhere. I looked in my rear-view monitor and the camera was upside down, pointing in the sky. I was like, 'Why is that?' So I came in and Bill (Riley) said that we had to repair the rear bumper.

It took a while and I think we were last when we came out of the pits for the first full-course caution. I told Bill that I think we should go to slicks because it looked like the track was drying out pretty quickly. So we changed to the slicks and it was the right decision. I think we drove by the field pretty fast."

Jonathan Bomarito – No. 93 Pennzoil Ultra SRT Viper GTS-R: "What a day for SRT and Viper. This is huge. To win in GT Class with this kind of competition is just amazing. What a show today. This entire SRT team has worked so hard to get these Vipers to victory lane.

The cars ran amazing. The No. 93 Viper was on an amazing alternate strategy. If the race would have stayed green at the end, we would have had a shot at the win. The race strategy was fantastic. We had a good feeling that one of the SRT Vipers would win today and it was the No. 91."

Kuno Wittmer – No. 93 Pennzoil Ultra Viper GTS-R: "This is what is comes down to – winning races. We've put so much effort into this win that it's very rewarding. The entire team has worked so hard that when you get to the top of the podium, it's an amazing feeling. We got the win. The Viper was amazing all day. When I saw the full-course yellow (flag) at the end and Marc (Goossens) in P1, it didn't really matter where I was. A SRT Viper was going to win the GT Class. I had tears in my eyes.

"We win as a team and lose as a team. The bottom line is that the SRT Viper was atop of the podium today."

Beth Paretta -- Director of Marketing and Operations, SRT Brand and Motorsports: “The last five minutes were a nail biter. We had different strategies for the two cars and it was going to come down if we had a yellow or not. We got the yellow, so that determined the outcome with the 91 getting the win. I’m so happy for SRT Motorsports and the SRT brand. It’s been one year, this is our birthday, so happy birthday to SRT Motorsports. This is a great way to celebrate.

“At the beginning of the season, we thought one car might be stronger than the other but now, week-to-week, it could be either one that is stronger. SRT Motorsports is one team with two cars. It’s not two teams. And we have four great drivers.

“The early incident with the 91 just knocks you off your game a little. You just have to regroup and make a pit stop earlier than you might have planned but everything worked out, the strategy was perfect. I’m really happy for SRT and the brand.

“This is a great statement. Seeing our car in the lead is better than any commercial or any ad that you can see in a magazine. It shows that our car is durable, can battle with anything on this grid and some days like today, you’re at the top of the podium.

“Bill (Riley) is very calming. He could be an air traffic controller. He’s very good about keeping us up to date on what’s going on and if there is a change of plans. Everything just worked great. It was a team effort.”

Gary Johnson – SRT Motorsports Racing Manager: “The No. 93 and one other car were the only cars that could make it to the end if the race stayed green and the 93 was in front of that other car. If there was a yellow, then the 91 was in control. We had it covered both ways. It was a great, great race but certainly a nail-biter at the end. The credit goes to the team and drivers, they did a fantastic job today.

“With the opposite pit strategy for each car, we felt we had it covered either way. Today, the strategy worked to perfection.”

Bill Riley – Vice President and Chief Engineer, Riley Technologies: “We were going to bring the No. 91 to pit road for fuel on the lap the caution came out there at the end of the race. So it couldn’t be better for us right now. We had a plan, a strategy. We split the strategy for the two cars.

If the caution did not come out, the No. 91 and the other cars up front would have to come to pit road for fuel as they couldn’t make it to the end under green. If that happened, the 93 was in position to win with enough fuel without making a stop. The only other car that could have made it under green was behind the 93.

“The speed was there with both cars. The 93 was on the pole. Both cars led laps. The SRT Motorsports team did a great job on pit road and our drivers were superb in the cars. It was a great job by everyone involved – great strategy and execution.”

Matt Bejnarowicz – Lead Engineer, SRT Motorsports: “I couldn’t be prouder of the team and I couldn’t be prouder of the drivers. It was a big nail biter. We spilt strategies because we couldn’t make it on fuel in the 91 if it went green so the 93 was playing it conservative and making sure we could make it to the end in case the rest of the cars in front of us pulled in for a splash of fuel. We really tried to keep both ends of the strategy covered and it worked out.

“On the 91, they weren’t sure they were going to make it on the caution laps. They were on fumes on the caution lap before they hit the checkered. Everyone was kind of biting their nails. We were that close on fuel. They were probably getting ready to pit the next lap for a splash if that yellow didn’t come out and a lot of competitors would have had to pit. The 93 could have stayed out but the 91 would have had to come in for sure without the yellow.

“It’s a year and a half of hard work by team members and it’s probably two-and-a-half to three years of planning. We’ve been away from factory racing at the top level since the year 2000 so it’s 13 years overdue.”