Dominik Farnbacher: “It was a good race for us if you look back at all the practice sessions, the qualifying."

Russ Ruedisueli – Director of Motorsports Engineering Group, Chrysler Group LLC: “It was a really, really tough weekend. We struggled in qualifying, threw a lot of stuff at the car for the race. The 93 car got beat up pretty bad. We struggled with driveline issues. 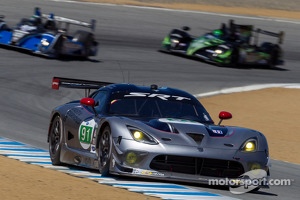 Gary Johnson – SRT Motorsports Racing Manager: “The 93 car suffered from a couple transmission failures. Once it fails the first time, you’ve got to get everything cleaned out or it will fail a second time. I know the guys did a great job trying to do that but it’s just impossible to get everything.

I think that’s what happened. We’ll go back and see if there were any root causes to it but we are really happy with the 91 finish. The pit crew did a fantastic job today. I think we gained a total of three positions through the race and it was all due to the pit stops. Those guys are to be applauded.”

ARE YOU ENCOURAGED ABOUT THE IMPROVEMENT THAT YOU SAW FROM PRACTICE AND QUALIFYING TO THE RACE? “It is good to see an improvement because I think it says that the people are getting a handle on what the cars need. Of course there is some testing at Le Mans that is going to help us a bit but it’s always good to know that people are getting a good read on the car and know where to go if something is not right.”

Dominik Farnbacher – No. 91 Fast & Furious 6 SRT Viper GTS-R (Finished 5th): “It was a good race for us if you look back at all the practice sessions, the qualifying. We couldn’t really find a solution to close the gap to the front runners. We did a severe change for the race with a little bit of a risk because we didn’t know what it would do. I think it worked out pretty well. Bill (Riley, VP and Chief Engineer, Riley Technologies) did a good job on that.

“But the biggest thanks today are going to my pit crew. They did an incredible job on getting us back out on time all the time. They were very good. It’s well deserved. I’m happy and we are still in the title chase. Marc did a good job, brought it home in one piece and that’s what we wanted.”

Marc Goossens – No. 91 Fast & Furious 6 SRT® Viper GTS-R (Finished 5th): "We had a tough break on a pit stop during our driver change that cost us a few spots. A car drove through our pit box and collided with the guy who holds the lollipop for us and shows Dominic where to stop. So Dominic overshot the box and we lost two positions which is out of our control. Our pit crew did a great job all day and made up a lot of positions for us.

"The biggest problem on a track like Laguna Seca is that if you're stuck behind traffic, you're demanding so much from your tires and your car that it hurts you further in the stint. At first, I had to fight harder than I should have been and then a yellow came out and I almost got taken out by a Ferrari who was three laps down. He got a penalty for it but it cost me track position and I got stuck behind two cars that I shouldn't have been racing behind.

"On that last restart, we were in good position to hold fourth place. If it wasn't for another Ferrari who jump-started us, he got going before the green got called. (He) overtakes me, I overtake him in Turn 3 and then he tries to dive-bomb me in the last corner. The last thing that I wanted was to have any impact on the car and try to save fourth place.

Our cars have to be shipped to Le Mans soon and I left the door open for him so we wouldn't make contact. We would have made contact and both would have DNF'd. We didn't need that and we would have had a massive amount of damage on the car. We can’t afford that at this point, knowing we're going to Le Mans soon.

The good thing is that we're scoring points for the championship and the Viper was flawless. There wasn't a lot of passing. You had to race hard, traffic just made it difficult. The GT Class points are so close, you need to get as many as you can. The team worked great today.

We had some issues in qualifying but changed so stuff for the race today and the car was better. We took the gamble of putting on a completely different setup for the race and it was the best it was all weekend. We have to be pleased by our effort."

Kuno Wittmer – No. 93 Pennzoil Ultra SRT Viper GTS-R (Finished 11th): "When the race went green, the Viper accelerated really well in the straightaway. Once we got down into the corner and into the downshifts, I lost second gear immediately.

We assessed the issue and decided to stay out for a little bit and run without second gear. That only prolonged the problem into the other gears. So we opted to come into the paddock, make repairs and get back out for points.

"We made changes to the gearing in about 45 minutes and was still really motivated to get back out there and race. The car felt good, the chassis felt good. It's a Viper and it always feels good when you’re driving it. We went back out to race and the car started to fail in gear on downshift and then eventually upshift.

I went to an override situation which overrides all the electronics and forces you to drive old school, heel-to-toe downshifts. It was quite exciting. I had to be very cautious not to over-rev the engine and damage anything. That lasted about three laps until we lost all the gears. As they say, we had a gear box full of neutrals."