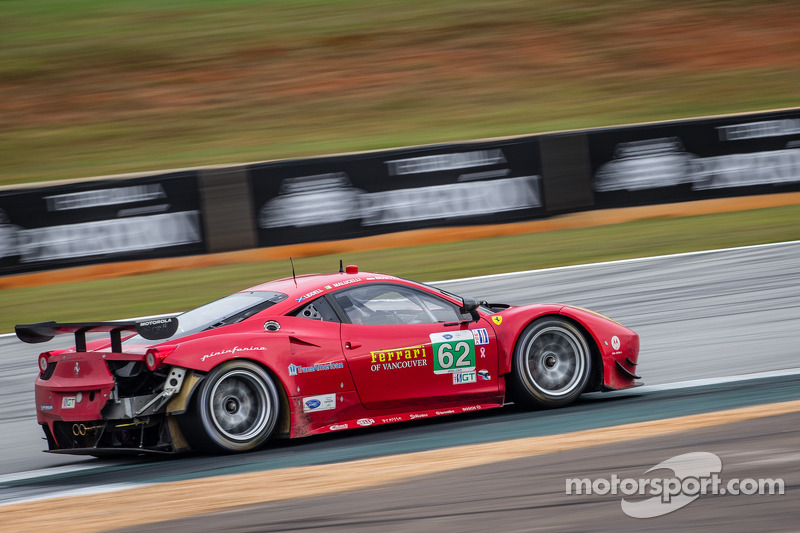 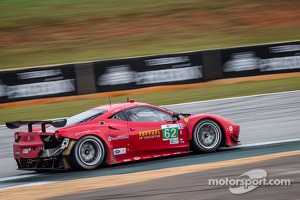 The race, which ran to the 1,000 mile distance (9 hours 37 minutes) featured all the excitement expected from the world-famous sports car race which is well-known for its close action. The final American Le Mans Series race before the series merges with Grand Am and becomes the Tudor United Sportscar Championship, and 16th annual Petit Le Mans, did not disappoint as highlights included variable weather, numerous lead changes and nine cautions with a constant variation of leaders throughout.

The Risi Competizione team showed why its name is in the history books on so many occasions as it once again proved itself to be as good as the factory GT efforts in one of the best sportscar series in the world, the American Le Mans Series.

Malucelli started from the GT class pole and drove the first stint. Early contact with one of the Corvettes forced a pit stop to remove damaged right rear bodywork. Numerous stops for different tire variations during changing weather conditions accounted for many of the pit stops, along with fuel and the scheduled driver rotations.

The only other incident of note was when Beretta went off while leading at nearly eight hours. In addition to the time lost off-track, the team also had to pit for a replacement wing mirror. Although the time lost relegated the Risi Ferrari to fourth place, Matteo’s late race speed brought the team to the podium in the last laps, its seventh Petit Le Mans podium in ten Petit Le Mans entries since 1999.

Giuseppe Risi: “I’m elated about being back on the podium at Petit, particularly when it didn’t look like it was going to happen at one time. First and foremost I really have to thank the team and the drivers; they did a stupendous job. This team is one of the very best crew of mechanics and technicians around - the car didn’t miss a beat. The drivers said the car was amazing so they were extremely happy and we never put a wheel wrong with our pit stops or anything else.

“That was one quick car today. It’s a shame to see Petit Le Mans end as we know it, but I’m sure there’s something else that will replace it in the same theme of competition. Hopefully, if everything lines up, I’ll be back next year.”

Dave Sims: “Obviously the weather at the start was wet, dry, wet, dry. The strategy was good by Rick [Mayer] and Don [Shaver] and kept us right in there, plus the crew who did a fabulous job. Halfway through we were right in with a chance. Three-quarters through the race though Olivier had that off and took the mirror off, and it took a little time for him to get off the grass and back on the track. We had to come in, as the rules say, to replace the mirror, so we did a full service and changed the drivers at the same time. We put Matteo in for the rest of the race, back in fifth after that stop, and got up to third. If he had another few laps, it might have been different.

Matteo Malucelli: “We did a good job. We lost one lap with the safety car and we were fighting for the victory. I tried to do my best. We were able to do a podium but not a victory today. The team had good pits stops and ran a good race but not enough for a victory.”

Olivier Beretta: “I’m happy for the whole team, for the crew, for Giuseppe and for Ferrari. I think it is always nice to finish the season on the podium. We won the last race before we came here so that’s nice. Today was very hard. The first stint was just trying to survive because I was on slicks on the wet. I tried to stretch as much so I don’t lose time on the pit stop. Then afterwards I push very hard. The pit stops were fantastic. I tried to do my best. I had an issue overtaking a GTC. I went too wide because s scared he was going to touch me on the side because I didn’t know where he was. Unfortunately I went on the wet grass with the rear left tires and I lost the car.”

Robin Liddell: “I'm pretty happy to get on the podium obviously. We had a strong race and a race that didn't go perfectly. We had a few little problems and I think we were lucky to get back on the podium in the end. We needed that late race caution and Matteo had the pace to fight with the guys up front. He drove a great stint at the end and fought his way up and get into the third spot. It was a great race, everyone performed really well and I'm really happy to be on the podium.”