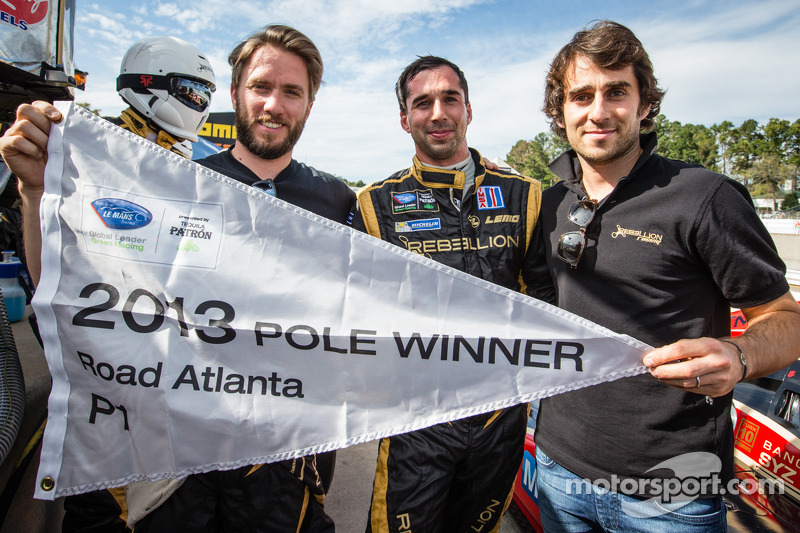 “It’s nice to be back racing in America, because we have a fight again with the Muscle Milk team,” said Jani, who captured 2013 poles at Long Beach and Mazda Raceway Laguna Seca before Rebellion Racing took a sabbatical from the ALMS to concentrate on FIA World Endurance Championship competition. “In qualifying, we have been quicker but we have seen the race is just a different game. With the GTCs and the safety cars, the visibility in our car is difficult, but that just means the race is that much closer. Hopefully tomorrow we will be able to turn our quick speed into a win.”

Muscle Milk Pickett Racing, seeking its ninth straight victory in the No. 6 HPD ARX-03c, qualified second with a lap of 1:10.397(129.892 mph) set by Lucas Luhr. Klaus Graf and Luhr have already clinched the P1 championship, and will be joined by Romain Dumas at the finale.

The remaining ALMS class championships will come down to the wire on Saturday, with the contenders starting near the front of their respective classes. David Brabham won the P2 class pole with a lap of 1:12.668 (125.833 mph) in the in the No. 01 Tequila Patrón HPD ARX-03b co-driven by Anthony Lazzaro and Scott Sharp with Extreme Speed Motorsports.

“We cut it very close, and winning the pole gave the team a big lift,” Brabham said. “Level 5 is very strong, we respect that. In race trim, it’s going to be a heck of a race. There is a lot at stake with the championship and I’m just happy to be involved. For me, being at the last ALMS race is very emotional. This championship has been a big part of my life and I’ve had some of my best racing here in the U.S. What I’ll miss most are the people, not just the racing.”

Level 5 Motorsports pilot Ryan Briscoe appeared to have won his ALMS-leading sixth pole in P2 qualifying, running 1:12.490 in the No. 551 Siemens/Alpina Watches/Ohiya Casino Resort Mazda-powered Lola B12/60 co-driven by Scott Tucker and Marino Franchitti. However, Briscoe ran out of fuel late in the session and brought out a red flag, costing him his fastest lap. Briscoe will start second, with his qualifying lap reset to 1:12.792 (125.618 mph).

Tucker enters the finale with a six-point lead over Sharp (149-143), and will need to finish second to capture the title if Sharp wins.

RSR Racing driver Bruno Junqueira originally qualified second in the No. 9 Johnson Controls ORECA FLM09 co-driven by Duncan Ende and Gustavo Menezes. However, the time was disallowed when post-qualifying technical inspection revealed an unauthorized modification to the car.

“It was very tough qualifying, a lot of back and forth with Bruno,” Cameron said. “We are off to a good start, and we’re really looking forward to getting it done tomorrow to get a team championship and a driver championship for Mike.”

The 1,000-mile (394 lap), 10-hour Petit Le Mans will be televised live on FOX Sports 2 beginning at 11 a.m. ET on Saturday, with the green flag set to wave at 11:30 a.m. Coverage throughout the day alternates between FOX Sports 2 and FOX Sports 1, including a live segment from 6:30-8 p.m. on FOX Sports 1. There will also be an encore presentation the following day on FOX Sports 1, beginning at 4 p.m. ET. Live coverage of the entire event will be available on FOX Sports’ new mobile application, FOX Sports Go. Saturday’s schedule opens with a 25-minute warm-up at 9:15 a.m. ET.