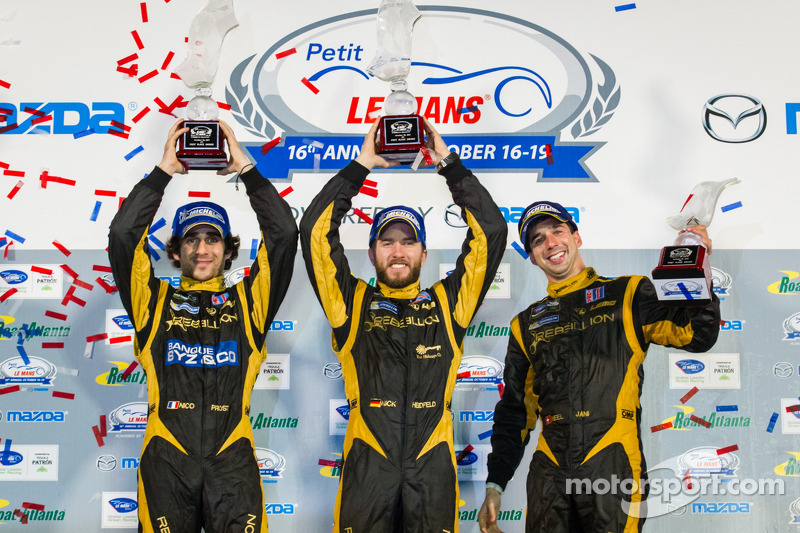 Neel Jani and Nico Prost repeated as winners of the 1,000-mile race, joined by Nick Heidfeld in the No. 12 Rebellion Timepieces/Lemo Connectors/Speedy Garage Toyota-powered Lola B12/60. Jani took the checkered flag by six laps over P2 winner Ryan Briscoe, who helped co-driver Scott Tucker to his fourth consecutive championship.

An unscheduled pit stop by Romain Dumas and the retirement of the P1 championship-winning No. 6 Muscle Milk Pickett Racing HPD ARX-03c-Honda five hours into the event opened the door for Rebellion, which spent the early hours battling to regain a lost lap resulting from an unnecessary contact penalty.

“The beginning was not easy at all, it was dry, wet, dry, but wet enough so had to keep the slicks,” Jani said. “It was kind of a gamble on the tires. It was a bit of a question what do you risk. I tried not to burn out the tires, but the rain never came so we switched back.”

The race took a dramatic turn at the five-hour mark when Dumas pitted with a one-lap lead in the No. 6 machine co-driven by Lucas Luhr and Klaus Graf. After a brief examination by the crew, the car was pushed behind the wall with terminal overheating problems.

Luhr ended his ALMS career with a series-leading 49 victories, with the team carrying an eight-race winning streak into the finale that saw Luhr and Graf clinch the driver, team and manufacturer titles. Rebellion Racing led three times for 228 of the 394 circuits, while Muscle Milk Pickett Racing paced the field twice for 158 laps.

Tucker’s co-drivers Marino Franchitti and Briscoe moved from third to first in the closing hour, with Briscoe winning by 1.394 seconds over David Brabham in the No. 01 Tequila Patrón HPD ARX-03b co-driven by Scott Sharp and Anthony Lazzaro with Extreme Speed Motorsports. Unofficially, Tucker beat Franchitti by eight points while Sharp was 10 points behind. Tucker won his third straight P2 crown after taking the PC title in 2010.

“All of them have been hard, and today it came down to the last race – and we had to win,” Tucker said. “Fortunately, it all worked out. Extreme Speed Motorsports gave us really tough competition, and it could have gone either way.”

A key moment came one hour into the race when race leader Jani brushed PR1 Mathiasen Motorsports’ No. 52 Molecule ORECA FLM09 as Dane Cameron exited the pits. As a result, that team lost 20 laps in the pits before Mike Guasch returned to the race in seventh position. The team was able to work its way back through attrition to finish fifth.

Perseverance pays off in Guasch’s race to prototype challenge crown