It was a 12 hour fight to the finish which ended in glory for the #12 REBELLION Racing Lola B12/60 Toyota of Nick Heidfeld, Neel Jani and Nicolas Prost, who finished third in the 61st running of the 12 Hours of Sebring.

With this finish, the team takes the top position and lead of the American Le Mans Series Championship. 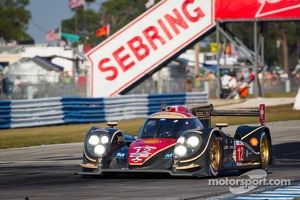 After a clean start to the race, the third placed #12 Lola-Toyota lost position to their closest competitor, the #6 Muscle Milk.

However, the race quickly turned to a game of cat and mouse following a chain of problems and penalties which plagued the #6 Muscle Milk and kept it chasing the #12 car throughout the second half of the race.

Today’s podium finish is a sweet victory after last year’s efforts where the same trio’s hopes for a third place podium finish were dashed away just one hour before the end of the race by a malfunctioning fuel sensor.

The team is also overjoyed to be taking home third place and best privateer finish in the last running of the LMP1 category here at Sebring International Raceway.

The sister car, #13 Lola-Toyota of Andrea Belicchi, CongFu Cheng and Mathias Beche finished in fifth after a string of bad luck. The #13 Lola-Toyota was a strong competitor for a podium finish at the top of the race, but a yellow flag on lap 57 found them on the wrong side of the safety car, followed by two stop-and-go penalties and mechanical issues which took it out of the fight for third place.

After overcoming its difficulties, the #13 car cruised to the checkered flag in fifth place, a testament to the reliability of the car and its two new drivers, as well as a finish which does not reflect the strong season opening performances of its drivers and crew. A positive start to the 2013 season.

Both cars will return to Europe to compete in the FIA WEC while the team’s third chassis will remain in the U.S. to finish out the ALMS season.

Nick Heidfeld and Neel Jani will take their first place points forward to the second round of the American Le Mans Series in Long Beach, CA on Saturday, April 20th.

Neel Jani - Driver Lola-Toyota # 12: “I’m very happy with our start to the season. To get a podium at the first race and to take the most points away is a great feeling.

The car was very difficult to drive at the end but the team had worked very hard throughout the race and we could survive it. I’m looking forward to the next race and hope to continue our success through the rest of the season.”

Nick Heidfeld- Driver Lola-Toyota # 12: “We got the maximum out of the car today. We had some small problems at the beginning but nothing major. My radio stopped working during my first stint.

But the crew did a great job giving us quick pit stops and we were able to benefit from the Muscle Milk’s problems. This podium is more special since it is the last LMP1 fight.

I really enjoyed doing qualifying and the race start, where I had a good fight with Andrea (Belicchi) which was a lot of fun. It’s a good start to our ALMS campaign but after today it looks like we really need the update which is planned for the next race to keep fighting with the Muscle Milk for the rest of this season.”

Nicolas Prost- Driver Lola-Toyota # 12: “I am really happy with our result today after the disappointment from last year. There are three important endurance races during the year: 24 Hours of Le Mans, Petit Le Mans and 12 Hours of Sebring.

It’s really something special to be on the podium in Sebring, especially since I am there with Neel and Nick. We get along so well and make such a great team, and it feels great to be sharing the podium with them.”

Mathias Beche, Lola-Toyota # 13: "Today’s 12 Hours of Sebring was a big day of firsts for me. It was my first race with Rebellion, my first time in a LMP1 and my first drive at Sebring.

I was in the game from the start and made no mistakes. With a little more luck, we could have had a better result. But we reached the end of the 12 hours so I am satisfied with the results. I learned a lot throughout the weekend.

The experience of night race will be valuable for Le Mans. So I am looking forward to continuing my progress at Silverstone for the beginning of WEC. I congratulate my teammates Nick, Nico and Neel win because (their win in) Florida is something awesome! '

Andrea Belicchi, Lola-Toyota # 13: "I'm really happy for the team. They did a great job. We had some problems with our ventilation system which forced us to stop.

We didn’t have any luck with the safety car either but we didn’t make any mistakes and had a good race. It is a good result for a young crew like ours. '

CongFu Cheng, Lola-Toyota # 13: "I want to congratulate my three teammates Neel, Nico and Nick for their 3rd place. This is an excellent result. For our part, we were a bit unlucky today, but still had a good race. We must continue to work closely together to achieve a better result in Silverstone. '

Bart Hayden, REBELLION Racing Team Manager: “Obviously we are delighted. It’s a great reward for all the people in the team, especially the guys based in our workshop who have worked extremely hard over winter to get the cars prepared.

The cars were very reliable and the drivers did a great job today. The whole team performed at the top level. It was a close fight with the Pickett Racing Muscle Milk car and we are looking forward to continuing that battle throughout the rest of the season.”